Vancouver, British Columbia--(Newsfile Corp. - April 12, 2021) - Forum Energy Metals Corp. (TSXV: FMC) ("Forum" or "Company") is pleased to announce that the diamond drill program has been completed on its 100% owned Fir Island uranium project in northern Saskatchewan. Ten holes for 3,051 metres were completed, short of the 5,000 metres planned due to a slow start-up caused by poor ice conditions. The program continued drilling on the Cathy Fault / resistivity anomaly with eight holes and tested a smaller resistivity low to the southwest (Figure 1). This program is operated by Forum and funded by Orano Canada Inc. (formerly AREVA Resources Canada) under terms of an option agreement to earn up to a 70% interest by spending up to $6 million on exploration. 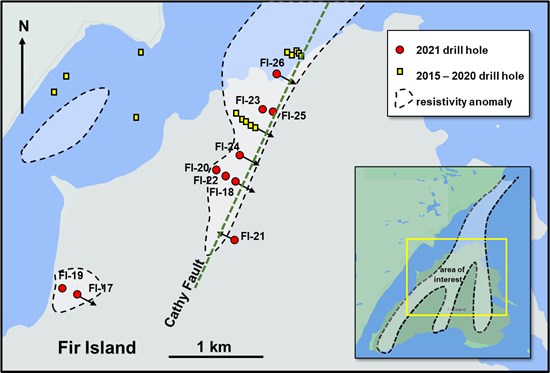 Infill drilling on land tested the Cathy Fault on approximately 500 metre sections. The offset of the unconformity continued along its length and the holes returned strong tectonization, quartz dissolution and remobilization, strong alteration, and confirmed the presence of dravite clays in both sandstone and basement lithologies (dravite is a common indicator around most uranium deposits on the east side of the Athabasca Basin).

Forum Energy Metals Corp. (TSXV: FMC) has three 100% owned energy metal projects being drilled in 2021 by the Company and its major mining company partners Rio Tinto and Orano Canada Inc. for copper/silver, uranium and nickel/platinum/palladium in Saskatchewan, Canada's number one rated mining province for exploration and development. In addition, Forum has a portfolio of seven drill ready uranium projects and a strategic land position in the Idaho Cobalt Belt. For further information: www.forumenergymetals.com

To view the source version of this press release, please visit https://www.newsfilecorp.com/release/80092