Heliostar geologists have identified an anomalous silicified structure with pyrite that returned a 1-metre channel sample grading 390 g/t silver and which remains open to expand. This mineralization indicates a robust silver endowment and shows the potential for high grades in the eastern block of the El Picacho district.

Additionally, eleven channel and rock samples have returned values greater than 1 g/t silver in a coherent anomaly that covers an area measuring 500m by 600m. This area is an extension of the Dos Amigos vein into the eastern block (Figure 1).

The high silver values and the broader zone of anomalous silver zone are considered to represent the upper extents of deeper vein system along strike from SilverCrest Metal's El Picacho Project. The portion of the El Picacho district on SilverCrest's ground consists of seven epithermal veins with over 10 kilometres of strike length. Veining and alteration on surface defines extensions of these veins eastward onto the Cumaro project that have never previously been drilled.

The Cumaro project exploration is early stage and these results represent the first of several steps designed to advance the Cumaro Project to a drill ready status.

Heliostar Exploration VP, Sam Anderson, commented, "We are excited by the silver results from the start of the Cumaro sampling and mapping campaign. These assays support our theory that Cumaro hosts precious metals veining and mineralization at depth that is the along-strike extension of known veins at Picacho. Further work is underway to follow-up these results, to sample the western portion of the claim and advance the project to a drill-ready status."

The Cumaro project is a five square kilometre inset claim within the El Picacho district and hosts the extensions of the El Picacho, Dos Amigos, and Basaitegui Veins (Figure 1). The current geological model indicates that a fault divides the Picacho-Cumaro district into western and eastern halves. East of the fault, host rocks are down-dropped, thereby preserving the vein system at depth. On the western side the veining and mineralization are exposed at surface.

Work on the western half of the district on exposed veins has defined robust mineralization from surface. In February, SilverCrest announced the completion of 42 holes with 21 holes intercepting an average of 4.1 metres estimated true vein width grading 8.14 g/t gold and 49.7 g/t silver1. However, on the eastern side, the veining and mineralization is only partially exposed by erosion and the full vertical extent of the precious metals system could be preserved at depth. No drilling has been undertaken on the eastern half of the district or within the Cumaro claim. The El Picacho Project is a nearby project that is not owned by Heliostar Metals Limited. There is no guarantee Heliostar will return similar exploration results as at El Picacho.

The recently completed Cumaro mapping and sampling campaign defined surface alteration corridors of clay and silica-clay alteration, assemblages that support the interpreted shallow level of erosion in the eastern block at Cumaro. These corridors display similar orientation to those in the western half of the district.

Most importantly, rock and channel sample assays support this interpretation. The 390 g/t silver assay from a channel sample in the eastern part of the claim demonstrates the potential for high-grade mineralization and may represent a pulse of mineralization which was able to travel upwards to the shallower environment. The greater than 1 g/t silver anomaly that covers 500 by 600 metres, and remaining open, may represent the upper extents of a mineralized system at depth. The most anomalous silver values occur within strongly silicified zones that may be the upper extent of quartz veining. 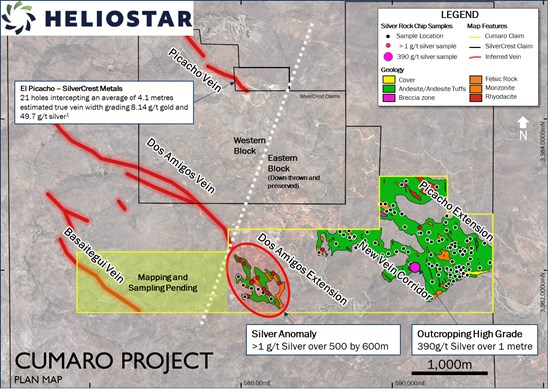 Notably to date only 60% of the Cumaro claim has been covered by outcrop mapping and sampling. The remainder of the district exploration is in-progress.

Epithermal mineralization commonly displays strong vertical zonation. That occurs as metal rich fluids make their way from depth to surface along faults or fractures. As the fluids travelled, they intersected a favourable zone where the pressure rapidly decreased and deposited metals. The majority of the precious and base metals carried by the fluid are deposited in that area and by the time the fluids arrived at surface, they were depleted in most of the precious metals and left only minor amounts of the precious metals to be sampled.

At the Ermitaño deposit, gold values in the vein at surface above the discovery hole were less than 1 g/t, however, the context of geologic setting encouraged drilling of the system. The first hole drilled about 100m below surface and encountered 8.9 metres at 0.8 g/t gold and 9 g/t silver showing a clear pattern of grade increasing with depth. The fourth hole made the discovery, with 17.9 metres at 11.4 g/t gold and 86 g/t silver2. It hit the mineralized zone approximately 200 metres below surface. The Ermitaño Project is a nearby project that is not owned by Heliostar Metals Limited. There is no guarantee Heliostar will return similar exploration results as at Ermitaño.

Heliostar is exploring Cumaro with these projects in mind. The company plans to advance the Cumaro project to a drill ready status through additional geological work and sampling. We look forward to announcing further results. 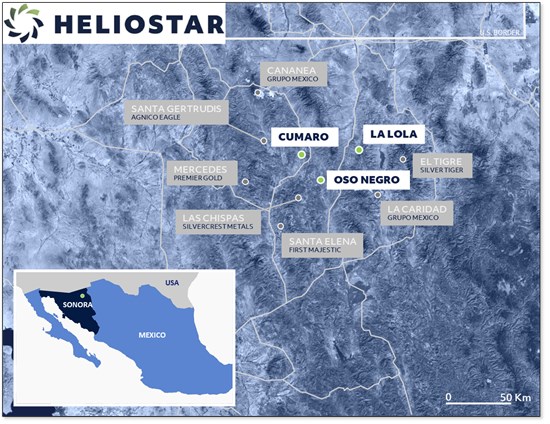 To view the source version of this press release, please visit https://www.newsfilecorp.com/release/79497