New York, New York--(Newsfile Corp. - January 31, 2021) - Faruqi & Faruqi, LLP, a leading minority and certified woman-owned national securities law firm, is investigating potential claims against Penumbra, Inc. ("Penumbra" or the "Company") (NYSE: PEN) and reminds investors of the March 16, 2021 deadline to seek the role of lead plaintiff in a federal securities class action that has been filed against the Company. 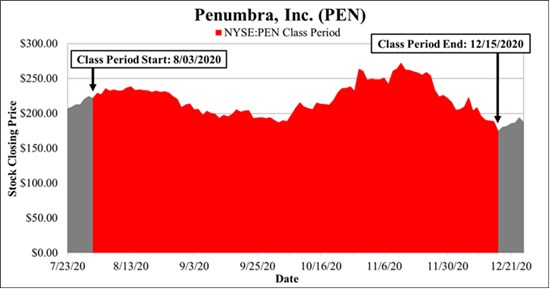 As detailed below, the lawsuit focuses on whether the Company and its executives violated federal securities laws by making false and/or misleading statements and/or failing to disclose: (1) that the Jet 7 Xtra Flex had known design defects that made it unsafe for its normal use; (2) that Penumbra did not adequately address the risk of the Jet 7 Xtra Flex causing serious injury and deaths, which had in fact already occurred; (3) that the Jet 7 Xtra Flex was likely to be recalled due to its safety issues; and (4) as a result, Penumbra's public statements as set forth above were materially false and misleading at all relevant times.

First, on September 14, 2020, the Foundation for Financial Journalism (the "FFJ"), an independent non-profit news outlet, published an article raising serious questions about the Jet 7 Xtra Flex's safety profile. The FFJ noted that since being introduced in mid-2019, there were twelve deaths listed in a Food and Drug Administration ("FDA") database that occurred after a surgeon injected an iodine contrast dye into the Jet 7 Xtra Flex. The FFJ article described how Penumbra's warnings against using the product with contrast dye and non-Penumbra products did little to address the Jet 7 Xtra Flex's safety issues.

Then, on November 23, 2020, an article was published in the Journal of NeuroInterventional Surgery presenting the cases of three patients who suffered as a result of Jet 7 Xtra Flex device malfunctions, including two fatalities. Although the journal article was not widely publicized on November 23 aside from a Twitter post just before market close from an account with a small following, over the next two days the article was more widely disseminated, particularly after it was shared by multiple reputed short sellers with hundreds of thousands of followers, including Marc Cohodes and Muddy Waters.

Then, on December 8, 2020, before the market opened, QCM issued another report reiterating its prior assertions and disclosing additional facts about the Jet 7 Xtra Flex's safety issues. Among other things, QCM's second report questioned the validity and independence of the scientific research supporting the Jet 7 Xtra Flex's safety, and accused the Company of using a fake author to publish studies regarding the purported safety and efficacy of its products.

Finally, on December 15, 2020, after the market closed, the Company issued a press release announcing that it was issuing an "urgent" recall of the Jet 7 Xtra Flex because the catheter "may become susceptible to distal tip damage during use" which could lead to injury or death. On a conference call held the same day, the Company's CEO acknowledged that the product's design "ma[de] the catheter susceptible to failure in certain scenarios" and that the Company's "steps to ensure the safe use of the product . . . were not able to fully address the risks."

Faruqi & Faruqi, LLP also encourages anyone with information regarding Penumbra's conduct to contact the firm, including whistleblowers, former employees, shareholders and others.

To view the source version of this press release, please visit https://www.newsfilecorp.com/release/73253