Toronto, Ontario--(Newsfile Corp. - January 14, 2021) - Stratabound Minerals Corp. (TSXV: SB) (OTC Pink: SBMIF) ("Stratabound" or the "Company") announced today it has concluded an arms-length option agreement (the "Win Option") to acquire an additional 78 quartz mining claims covering an area of 15.7 km2 adjacent to and along strike of its Golden Culvert and Little Hyland projects in the southeastern Yukon Territory. The Company now controls a total of 99.1 km2 along approximately 28 km of favourable strike in the developing Hyland Gold Trend.

The Win Option lies strategically along the main Golden Culvert Gold Trend where it projects approximately 11 km directly southeast of the Main Discovery area (Figure 1). The Win Option has been subjected to minimal historic exploration which has neither been gold-focussed nor occurring within the projected gold trend. Even so, one historic off-trend grab* sample yielding 0.52 g/t gold,100 g/t silver and 0.63% lead has been confirmed by the Company's 2020 due diligence site investigation which yielded two outcrop samples assaying 0.64 g/t gold, 155 g/t silver,1.25% lead and, 0.46 g/t gold, 28.8 g/t silver, respectively.

(*Note: Grab samples are selective by nature and may not represent the true grade or style of mineralization) 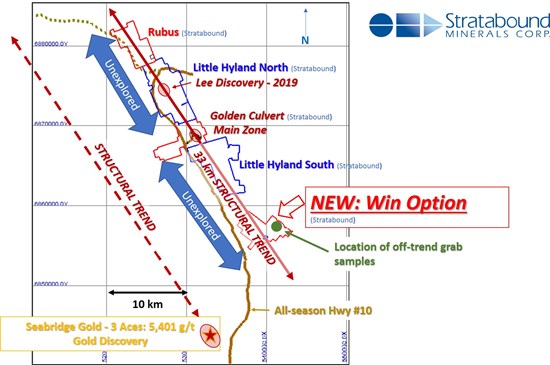 Mr. R. Kim Tyler, President and CEO of the Company stated, "We are very pleased to have concluded a successful option agreement on the Win Property and the increased opportunity it affords to find more gold occurrences such as found to date along the Golden Culvert and the parallel 3 Aces trends. We look forward to including it in our exploration plans along with the Golden Culvert and Little Hyland Projects in 2021."

The samples referenced in this press release were collected and hand-delivered by Stratabound personnel to the ALS Canada laboratory in Whitehorse, YT where they were crushed to 70% less than 2mm. A riffle split of 250 grams was then taken and pulverized to an 85% passing 75 microns pulp sub-sample. The pulps were then shipped by ALS Canada to its Vancouver laboratory for gold and multi-element analyses. The Au-AA26 gold assaying procedure used is a standard fire assay with AA finish technique on a 50-gram sub-sample taken from the 250-gram pulp split.

The samples were also tested for 51 other elements using the ME-MS41 Ultra Trace Aqua Regia ICP-MS method. Over-limit results of silver and lead on one sample reported in this release were re-assayed by the Ag-OG46 and Pb-OG46 ore grade methods. ALS uses a procedure of standards, blanks and duplicates inserted into the sample stream results for which all fell within satisfactory confidence limits. ALS is an independent internationally recognized and ISO/IEC 17025:2017 accredited chemical analysis company.

To view the source version of this press release, please visit https://www.newsfilecorp.com/release/72070