Vancouver, British Columbia--(Newsfile Corp. - December 21, 2020) - Pacific Empire Minerals Corp. (TSXV: PEMC) ("Pacific Empire", "PEMC" or the "Company") is pleased to announce it has signed a binding Definitive Agreement (the "Agreement") to grant 1111 Acquisition Corp. ("1111 Acquisition") an exclusive option (the "Option") to earn a 70% interest in the Company's 14,040-hectare Pinnacle Copper-Gold Project (the "Project") in north-central British Columbia, Canada. The contemplated transaction was first announced in a press release dated August 26, 2020.

Highlights of the Agreement include:

Please see the Transaction Details section below for more information on the Agreement. The planned work program will be developed in the coming months by 1111 Acquisition Corp and will build upon previous drilling, geophysical and geochemical sampling programs completed by PEMC and previous operators.

"We are excited to have a very strong technical team advancing the Pinnacle property during a period of resurgent copper prices and increasing activity in this area," commented Brad Peters, President and CEO of Pacific Empire. "With the recent merger of Serengeti Resources and Sun Metals, in addition to the arrival of Australian miner South 32 to this mining camp, it looks as though this will be a busy area over the coming months and years." 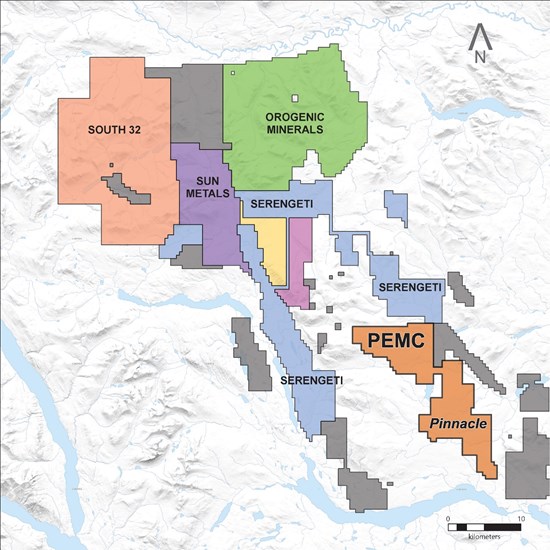 About the Pinnacle Property

The Pinnacle property is located in Central British Columbia, 50 km to the west of Centerra Gold's Mt. Milligan Mine, 30 km to the southeast of Serengeti Resources' Kwanika project and 20 km to the north of the Company's Jean Marie Copper-Gold-Silver-Molybdenum Project.

The Pinnacle property was first explored in the early 1970s following the identification of anomalous stream sediment samples from reconnaissance prospecting in the central portion of the property at the Aplite Creek zone. Geochemical surveys, limited diamond drilling and geophysical surveys were completed and confirmed the presence of copper and gold mineralization at Aplite Creek.

In 2012, the area was staked by PEMC and since that time the Project has seen over $2,000,000 in partner-funded exploration. During 2014 and 2015, Oz Exploration Pty Ltd. completed a total of 44 line-km of Induced Polarization surveys in addition to completing 2,493 metres of diamond drilling at the Elbow and Sooner targets. From 2016 through 2017, additional partner-funded work was completed by ML Gold Corp. consisting of geophysical surveys and eight diamond drill holes, totalling 2,187 metres. PEMC completed four reverse circulation drill holes in 2019.

If you would like to stay informed of the latest corporate activities please click here to provide consent and receive news, updates and important information as we move our projects forward.

Qualified Person
George Cavey, P.Geo., Technical Advisor for the Company, serves as a qualified person as defined by NI 43-101 and has reviewed the scientific and technical information in this news release, approving the disclosure herein.

About Pacific Empire Minerals Corp.
PEMC is an exploration company based in Vancouver, British Columbia, that employs a "hybrid prospect generator" business model and trades on the TSX Venture Exchange under the symbol PEMC. The Company's strong portfolio of projects is a result of continuous generative work conducted since the Company's inception in 2012.
By integrating the project generator business model with low-cost RC drilling, the company intends to leverage its portfolio by identifying, and focusing on, the highest quality projects for partnerships and advancement.

To view the source version of this press release, please visit https://www.newsfilecorp.com/release/70659