The Carron project is located approximately 400 kilometres west of Cairns in Northern Queensland. Inflection has identified a series untested orogenic vein and intrusion related targets northwest of and on trend from the historic Croydon Goldfields (Figure 1). The Croydon Goldfields was one of Queensland's more significant gold mining districts, with a total production from 1885 reportedly over one million ounces from numerous high-grade quartz-vein lode deposits with an average of 35 g/t Au(1).

Inflection plans to test a number of the priority drill targets on trend from Croydon. These targets are completely covered by post-mineral sedimentary cover masking the potentially prospective geology. None of the Carron targets developed by the Company have previously been drill tested. 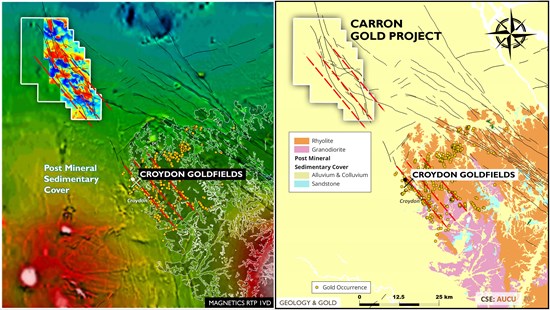 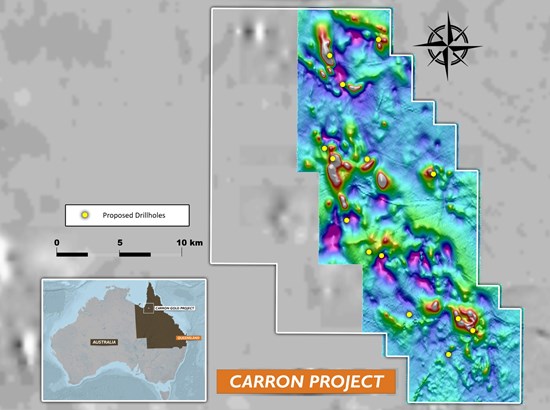 The Carron project is the subject of an Exploration Farm-in Agreement in which the Company may earn up to a 100% interest. The Company currently has a 50% interest in the project and is in the process of earning an additional 20% interest by incurring exploration expenditures of AUD$1MM.

The scientific and technical information contained in this news release has been reviewed and approved by Mr. Carl Swensson (FAusIMM), Inflection's Vice President Exploration, and a "Qualified Person" ("QP") as defined in National Instrument 43-101 - Standards of Disclosure for Mineral Projects.

The Company further announces that it has granted 100,000 incentive stock options (the "Options") to an employee of the Company. Each Option is exercisable to purchase one common share of the Company at a price of $0.40 for a five-year term, such Options to vest six months after the date of grant. The Options are subject to the acceptance of the Canadian Securities Exchange.

About Inflection Resources Ltd. Inflection is a technically driven gold and copper-gold focused mineral exploration company listed on the Canadian Securities Exchange under the symbol "AUCU" with projects in Eastern Australia. The Company is systematically drill testing a large portfolio of drill-ready projects in New South Wales and in Queensland.

The Company is exploring for large gold and copper-gold deposits in the northern interpreted extension of the Macquarie Arc, part of the Lachlan Fold Belt in New South Wales. The Macquarie Arc is Australia's premier porphyry gold-copper province being host to Newcrest Mining's Cadia Valley deposits, the CMOC Northparkes deposits and Evolution Mining's Cowal deposits plus numerous active exploration prospects including the Boda Project, the recent discovery made by Alkane Resources.

For more information, please visit the Company's website at www.inflectionresources.com.

This news release includes certain forward-looking statements and forward-looking information (collectively, "forward-looking statements") within the meaning of applicable Canadian securities legislation. All statements, other than statements of historical fact, included herein including, without limitation, statements regarding future capital expenditures, anticipated content, commencement, and cost of exploration programs in respect of the Company's projects and mineral properties, and the anticipated business plans and timing of future activities of the Company, are forward-looking statements. Although the Company believes that such statements are reasonable, it can give no assurance that such expectations will prove to be correct. Often, but not always, forward looking information can be identified by words such as "pro forma", "plans", "expects", "may", "should", "budget", "scheduled", "estimates", "forecasts", "intends", "anticipates", "believes", "potential" or variations of such words including negative variations thereof, and phrases that refer to certain actions, events or results that may, could, would, might or will occur or be taken or achieved. Forward-looking statements involve known and unknown risks, uncertainties and other factors which may cause the actual results, performance or achievements of the Company to differ materially from any future results, performance or achievements expressed or implied by the forward-looking statements. Such risks and other factors include, among others, statements as to the anticipated business plans and timing of future activities of the Company, including the Company's exploration plans. the proposed expenditures for exploration work thereon, the ability of the Company to obtain sufficient financing to fund its business activities and plans, delays in obtaining governmental and regulatory approvals (including of the Canadian Securities Exchange), permits or financing, changes in laws, regulations and policies affecting mining operations, the Company's limited operating history, currency fluctuations, title disputes or claims, environmental issues and liabilities, as well as those factors discussed under the heading "Risk Factors" in the Company's prospectus dated June 12, 2020 and other filings of the Company with the Canadian Securities Authorities, copies of which can be found under the Company's profile on the SEDAR website at www.sedar.com.

To view the source version of this press release, please visit https://www.newsfilecorp.com/release/68941