The top 10% highest grade samples were distributed across 670 metres of strike, 290 metres of vertical relief and included:

All 93 surface samples averaged 13.27 g/t gold uncapped, (8.82 g/t Au capped*), and ranged between <0.01 g/t to 320 g/t gold. Sixty-five, (70%), of the samples ranging between 0.25 g/t to 320 g/t gold averaged 18.96 g/t gold uncapped, (11.48 g/t gold capped*). Visible gold was identified in two of the samples that assayed 118.0 and 92.9 g/t gold respectively and only two samples in the group were below assay detection limits of <0.01 g/t Au. Sampling was done selectively on sulphide-bearing quartz float-trains along strike of the known exposed vein outcrops and subcrops, (see Figures 3 and 4), and may not represent the true grade or style of mineralization.

* A capping grade of 83.8 g/t Au calculated as double the standard deviation of the 93-sample population was applied to all values greater than 83.8 g/t Au.

Mr. R. Kim Tyler, President and CEO of the Company commented, "This continued evidence of high-grade gold in the region further exemplifies the 5,401 g/t gold discovery in 2003 at the nearby 3 Aces property located 25 km to the south of our Project and recently acquired by Seabridge Gold, a $1.7 billion market capitalized gold development company and a significant new presence in our neighbourhood. We believe we are at the very early stage of the next significant North American gold district. We look forward to receiving assay results from our recently completed latest phase of drilling, just below the float-trains and subcrops described in this press release."

He further added, "The unique and special feature of our Golden Culvert region, and the Yukon in general, is that it was once a land-bridge during past ice-ages connecting North America with Asia, and was not covered by kilometres-thick flowing continental ice sheets as most of the remaining North American continent was. The significance is that much of the gold found lying about in float-trains linking gold-bearing outcrop on surface here at the Golden Culvert remains at, or near, its sources. Mineralization has not been scraped clean and transported thousands of kilometres away, nor have these sources been covered and hidden by thick accumulations of glacial till and overburden as has occurred elsewhere on the continent. This makes our exploration work of simply following the trains of mineralized boulders especially simple, effective and rewarding. The evidence for significant high-grade gold mineralization in our district lies, literally, at our feet as this work program has clearly demonstrated."

The mineralized float-trains link up and connect gold mineralization exposed in surface trenches reported in previous releases including trench TR1923-B which yielded 24.41 gpt Au over 6.0m including of 95.0 gpt Au over 1.5m, (Stratabound press release Oct. 23, 2019) and overlie similar gold mineralization reported in past diamond drilling up to 60.1 g/t Au over 0.9m within a larger interval of 2.3 g/t Au over 33.1m in drill hole GC1803, (Stratabound press release Oct. 10, 2018). 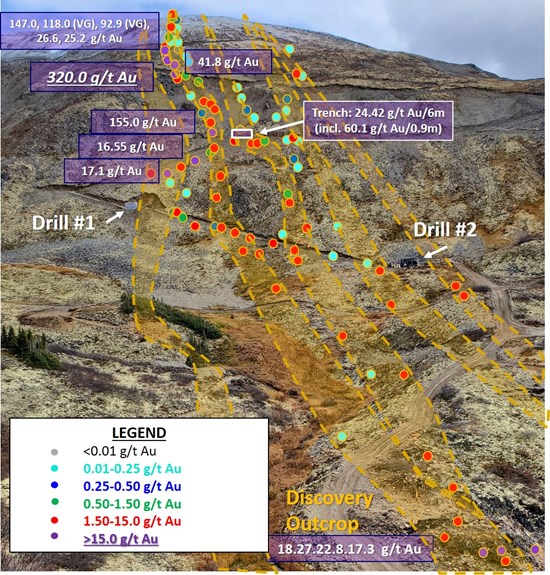 Figures 1 and 2, above and below, show the distribution of the float-train assay results as they relate to the multiple parallel gold-bearing structural zones and surrounding gold-in-soil anomaly. 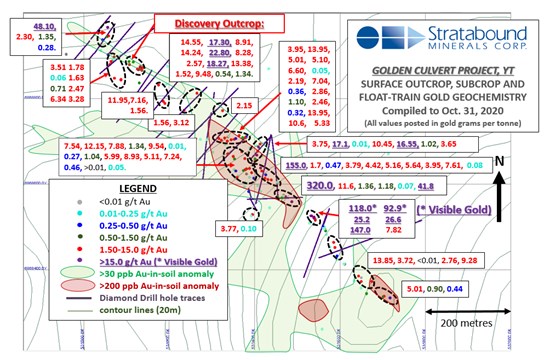 Eight diamond drill holes totaling 1,370 metres and 24 surface trenches reported in previous exploration programs have intersected and outlined a 970-metre-long by 130-metre-wide mineralized corridor containing multiple parallel gold-bearing structures that have been targeted for definition and extensional drilling this season.

A total of 25 diamond drill holes comprised of 4,587 metres and 24 trenches have now been completed over 1 kilometre of strike to date.

The Company wishes to thank the Yukon Territorial Government for approving a grant of funds and the Company's COVID 19 Self-Isolation Plan that enabled this Phase 1 program to proceed, without which these results may not have been obtained. The Company also wishes to respectfully acknowledge the First Nations communities of Liard First Nation and Ross River Dena in whose traditional lands the Company has been conducting its work.

The samples referenced in this press release were collected and hand-delivered by Stratabound personnel to the ALS Canada laboratory in Whitehorse, YT where they were crushed to 70% less than 2mm. A riffle split of 250 grams was then taken and pulverized to an 85% passing 75 microns pulp sub-sample. The pulps were then shipped by ALS Canada to its Vancouver laboratory for gold and multi-element analyses. The ME-AA26 gold assaying procedure used is a standard fire assay with AA finish technique on a 50-gram sub-sample taken from the 250-gram pulp split. Samples that exceeded the 100 g/t Au upper detection limit of this method were re-assayed by a by the Au-GRA22 Ore Grade procedure on a 50-gram pulp fire assayed and gravimetric finish analyses.

Forty-one of the samples with the highest values were duplicated by the Au-SCR24 Metallic Screening method on 1 kg pulps derived from the original coarse rejects. The pulps were then screened on a +/- 100-micron screen with duplicate assays done on 50g each of the under-size fraction and assaying of the entire over-size fraction. Results are compared and summarized in Table 1 below.

The samples were also tested for 51 other elements using the ME-MS41 Ultra Trace Aqua Regia ICP-MS method. ALS uses a procedure of standards, blanks and duplicates inserted into the sample stream results for which all fell within satisfactory confidence limits. ALS is an independent internationally recognized and ISO/IEC 17025:2017 accredited chemical analysis company. 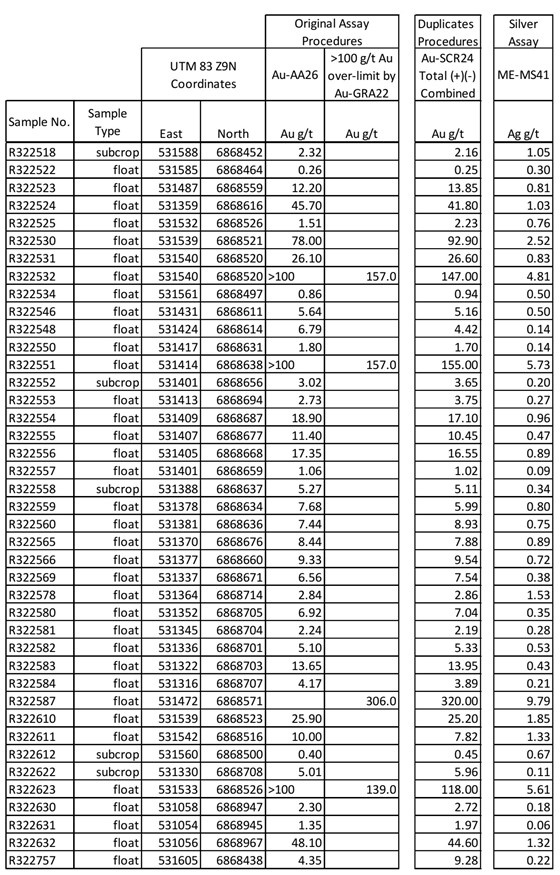 To view an enhanced version of this table, please visit:
https://orders.newsfilecorp.com/files/4064/68363_strata.jpg

To view the source version of this press release, please visit https://www.newsfilecorp.com/release/68363

Sign up to receive news releases by email for Stratabound Minerals Corp. or all companies belonging to the Mining and Metals industry.