Vancouver, British Columbia--(Newsfile Corp. - November 17, 2020) - SKRR Exploration Inc. (TSXV: SKRR) (OTC PINK: SKKRF) (FSE: B04Q) ("SKRR" or the "Company") is pleased to announce that it successfully completed an 18 hole, 2,986m drill program on the Olson property (the "Property"). The Olson property area covers 5038 ha located within the Trans Hudson Corridor 100 km east of La Ronge, Saskatchewan and 80km south of SSR Mining's Seabee Gold Operation. Results from recent drilling activity will be released once they have been received, compiled and interpreted. Under the terms of the option agreement with Eagle Plains Resources Ltd. ("Eagle Plains"), SKRR may earn-in up to a 75% interest in the Property.

We are very pleased to complete SKRR's inaugural drill campaign where the original plan was expanded to 18 holes due to favorable early results. We look forward to following up on this summer's exploration success with an expanded winter drill program."

Seven separate target areas were tested throughout the course of the 2020 program, including the Jena, Juba, Point, Tuscan, Siskin, Olson and Michael Zones.

The four week program was supervised by Terralogic Exploration Services of Cranbrook, B.C. and relied extensively on support services and personnel from the town of Deschambault Lake, SK. Management of Eagle Plains and SKRR would like to extend their thanks to the Peter Ballantyne Cree Nation ("PBCN") for their open communication and input and would like to recognize the Saskatchewan Ministry of Environment and its various agencies and contractors for their efforts in keeping this project moving amidst the challenges that COVID-19 has presented.

A variety of core photos are now available at www.skrr.ca. 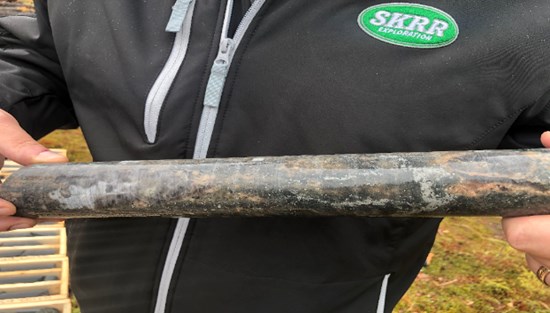 The 2020 Olson field program that preceded drilling activity was completed during the summer of 2020 and was designed to define targets for follow-up diamond drilling. Discovery International Geophysics completed 13 lines (8.6 line kilometers total) of combined IP/ DC Resistivity over the Point, Tuscan and Juba areas. This was followed by a 13-day geological field program carried out by TerraLogic Exploration Services. Soil sampling, prospecting, field mapping, and channel sampling were undertaken to delineate new areas of gold mineralization as well as advance known showings to identify and prioritize drill targets.

A 2,986m drill program was conducted October 2, 2020 to October 27, 2020. A total of 18 holes were completed to their target depths on seven separate target areas: Jena, Juba, Point, Tuscan, Siskin, Olson and Michael. Samples from all eighteen (18) drill holes have been delivered to the laboratory and assay results are pending. Mineralized widths are along drill core axis and are not necessarily representative of true thickness. True thickness is yet to be determined. The reporting of results of visual observations of the first seven holes were summarized in a news release on October 14, 2020. 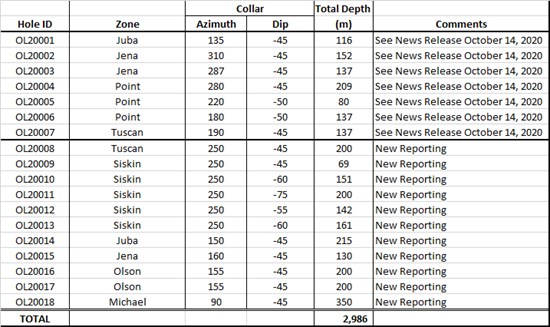 Jena/Juba - Twenty surface samples from outcrops taken earlier this summer returned values >1000 ppb Au, with a maximum of 15.7 g/t Au from quartz arsenopyrite veins (see News Release June 02, 2020). Two holes tested beneath the Juba arsenopyrite-bearing trenches. Three holes tested the south Jena area to test a significant IP chargeability anomaly with coincident with the northwest dipping contact between a feldspar porphyry to the east and meta-sediments to the west.

Point - Three angle drill holes tested the Point target where earlier field work this summer identified anomalous soil geochemistry (80 ppb to 2704.6 ppb Au) and prospecting returned assays up to 9.8 g/t Au. All three holes were collared in granodiorite and were designed to test for mineralization associated with an interpreted meta-sedimentary contact projected to be encountered around ~230m depth (see News Release October 14, 2020).

Siskin - Historical drilling at the Siskin intercepted wide zones of low-grade discontinuous Au mineralization (SMDI #2219f; DDH S-84-1: 26.22m @ 0.38g/t Au). Some of the above results and information were taken directly from the SMDI descriptions and assessment reports filed with the Saskatchewan government. SKRR cautions that historical results were collected and reported by past operators and have not been verified nor confirmed by a Qualified Person but form a basis for ongoing work in the Olson property area.

Detailed mapping and structural interpretation in the Siskin area in 2020 identified a previously un-reported structure that may control the orientation of higher grade ore shoots within both the Siskin structural corridor and in other parts of the property. Five holes were drilled at Siskin targeted to intersect the down-plunge extensions of the surface mineralization. All five holes intersected mineralization at Siskin and all holes seem to endorse the relationship between east dipping quartz-carbonate veinlets and mineralization (particularly arsenopyrite) at depth and along strike.

Drill holes OL20009, OL20010 and OL20011 were drilled on a fence to test the Siskin mineralization system at depth, where significant grab samples at surface returned assays of 12.069 g/t Au and 9.909 g/t Au. All 3 holes encountered multiple intervals of mineralization from 0.3m wide to several meters wide of generally narrow quartz-carbonate veinlets and 2 - 5% arsenopyrite and 1-3% pyrite, with occasional occurrences of chalcopyrite. OL20012 was a 75m step-back to the east of the fence of holes OL2009 to OL20011. The hole encountered mineralized intervals up to 13.87m wide (108,2m - 122.53m), but not as strong as seen in the previous fence of holes. OL20013 was collared a further 50m north to test mineralization along strike. As with the other 4 holes, OL20013 encountered multiple zones of mineralization from 0.31 cm up to 14.32m (110.34m to 124.66m) consisting of 1-5% arsenopyrite, and 1-2% pyrite associated with narrow quartz-carbonate veinlets.

Olson - Two holes were designed to test for mineralization as seen at the historic Olson "Point" surface trenches where grab samples returned assays up to 15.19 g/t Au. Field observations indicate a linear ENE plunging control on mineralization. OL20016 encountered weak mineralization in several narrow zones less than 1m wide and with up to 1% arsenopyrite and was generally hosted in metabasalts. Mineralization appeared similar in style to that seen as Siskin and overall did not appear as prolific as that observed in the Olson trenches. OL20017 was collared ~300m to the west of OL20016 and encountered good mineralization from 140.82m to 150.27m with quartz veining and 2% arsenopyrite. The results suggest some continuity along dip of mineralization to the Olson "Point" trenches.

Michael Lake - One hole (OL20018) was designed to test the IP chargeability anomaly in Michael Lake ~1.2km to the east of OL20016. The anomaly is interpreted to reflect a volcanic / intrusive contact. Multiple zones of small-scale mineralization were present on the scale of 0.1m to 0.3m associated with 1-2% arsenopyrite. Most significant was a 3.35m wide zone of mineralization with 1-2% semi-massive patchy pyrite (up to 5% locally over 10cm intervals) in intercalated fine grained semi-pelites and fine grained metabasalts.

SKRR is also pleased to announce it will finalize additional drill sites and begin drilling on new targets on the Property once it has received the final assays from its summer drill program. The size of the expanded drill program will be determined based on the pending assays and other planned drill programs on certain of the Company's other properties.

The scientific and technical information contained in this news release has been reviewed and approved by Ross McElroy P.Geol, a director of the Company and a "Qualified Person" as defined in National Instrument 43-101 - Standards of Disclosure for Mineral Projects.

SKRR is a Canadian-based precious metal explorer with properties in Saskatchewan - one of the world's highest ranked mining jurisdictions. The primary exploration focus is on the Trans-Hudson Corridor in Saskatchewan in search of world class precious metal deposits. The Trans-Hudson Orogen - although extremely well known in geological terms has been significantly under-explored in Saskatchewan. SKRR is committed to all stakeholders including shareholders, all its partners and the environment in which it operates.

This news release contains "forward-looking information or statements" within the meaning of applicable securities laws, which may include, without limitation, statements that address the planned drilling on the Olson property and other properties, receipt of assays, other statements relating to the technical, financial and business prospects of the Company, its projects and other matters. All statements in this news release, other than statements of historical facts, that address events or developments that the Company expects to occur, are forward-looking statements. Although the Company believes the expectations expressed in such forward-looking statements are based on reasonable assumptions, such statements are not guarantees of future performance and actual results may differ materially from those in the forward-looking statements. Such statements and information are based on numerous assumptions regarding present and future business strategies and the environment in which the Company will operate in the future, including the price of metals, the ability to achieve its goals, that general business and economic conditions will not change in a material adverse manner, that financing will be available if and when needed and on reasonable terms. Such forward-looking information reflects the Company's views with respect to future events and is subject to risks, uncertainties and assumptions, including those filed under the Company's profile on SEDAR at www.sedar.com. Factors that could cause actual results to differ materially from those in forward looking statements include, but are not limited to, continued availability of capital and financing and general economic, market or business conditions, adverse weather conditions, decrease in the price of gold and other metals, equipment failures, failure to maintain or obtain all necessary government permits, approvals and authorizations, the impact of Covid-19 or other viruses and diseases on the Company's ability to operate, failure to maintain community acceptance (including First Nations), increase in costs, litigation, and failure of counterparties to perform their contractual obligations. The Company does not undertake to update forward‐looking statements or forward-looking information, except as required by law.

To view the source version of this press release, please visit https://www.newsfilecorp.com/release/68346

Sign up to receive news releases by email for SKRR Exploration Inc. or all companies belonging to the Mining and Metals, Precious Metals industries.