Pancon's Shallow Drill Results at Brewer Show Widespread Continuity of Near-Surface Gold in All 90 Holes, Open in All Directions

Of the 90 shallow RAB holes drilled in August and September, 7 are in sulphide-bearing tailings from the former mine that were encapsulated back into the main pit during reclamation. The remaining 83 exploration holes are located outside the former mine. All 90 holes contain gold, with the highest-grade samples from each hole ranging from 0.01 g/t Au to 3.59 g/t Au. Of the total 1,133 samples collected, 1,029 samples or 91% contain detectable gold (>0.005 g/t Au). Samples were collected in 1.5-meter intervals following strict QA/QC protocols.

Pancon President and CEO Layton Croft stated: "The initial shallow RAB drill program confirms widespread anomalous gold distribution and associated alteration mineralogy within the oxidized silica cap known to cover the Brewer property. Widespread continuity of near-surface gold at Brewer is very encouraging, bolstering our hypothesis of the potential for an economic shallow gold resource in addition to potential deeper sulphide-hosted gold-copper deposit(s) that may exist. Our spectral analysis, meantime, shows widespread distribution - coincident to the gold-bearing RAB holes - of quartz, topaz, pyrophyllite and other associated minerals, which are useful vectors to guide further exploration. Our successful RAB program has nicely set the stage for our fully funded 10,000-meter diamond drill program that began on November 3, and for follow-up geophysics and additional RAB drilling over time." 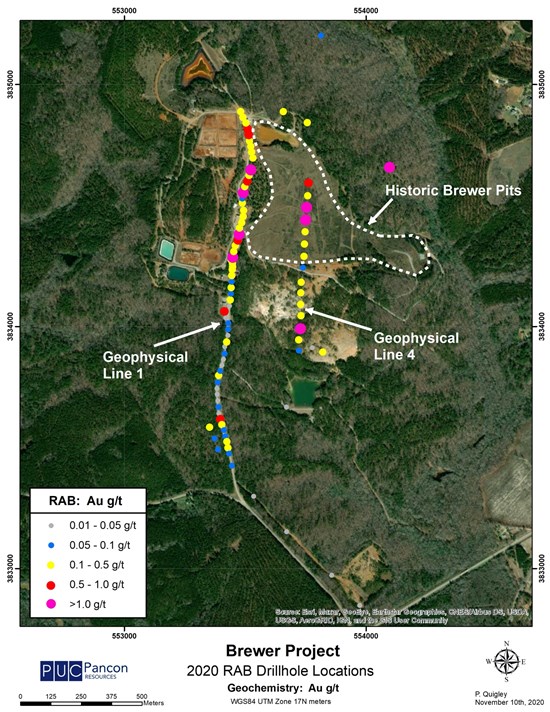 Figure 2 below shows normalized relative percentages, respectively, for topaz and pyrophyllite in the 90 RAB holes. The short-wave infrared reflectance (SWIR) mineralogy scan is taken from the highest gold grades per hole sample. The mapped alteration of topaz appears to correlate well with the higher gold intercepts in Figure 1, most of which occur outside the former mine. The mapped alteration of pyrophyllite shows a zonation pattern with concentrated distribution to the south and southwest of the former mine, as well as less concentrated distribution to the northwest. 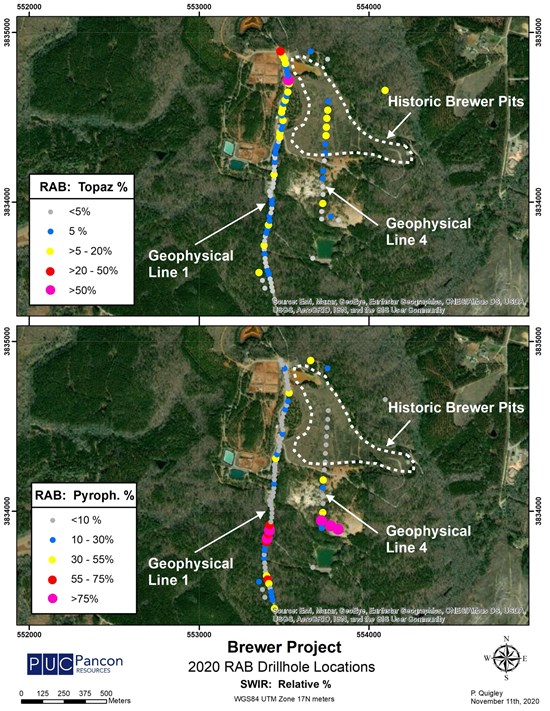 The technical information in this news release has been prepared in accordance with Canadian regulatory requirements as set out in NI 43-101 and reviewed and approved by Richard "Criss" Capps, PhD, RPG, SME REG GEO, a Qualified Person as defined by NI 43-101. The Company cautions that the mineralization at the former Brewer Gold Mine is not necessarily indicative of the mineralization that may be identified on the Company's ongoing and upcoming exploration work.

Pancon is a Canadian junior mining company focused on exploring the prolific and underexplored Carolina Slate Belt in Chesterfield County, South Carolina, USA. In January 2020, Pancon won the exclusive right to explore the former Brewer Gold Mine property. Between 1987-1995, Brewer produced 178,000 ounces of oxide gold from open pits that extended to 50-meter depths, where copper and gold-rich sulfides were exposed but could not be processed by the oxide heap leach processing facility. Brewer hasn't been explored since 1997, and most of the tools used previously to explore the property have since been updated with more advanced technologies. Brewer is a high sulphidation system driven by a sub-volcanic intrusive and possibly connected to a large copper-gold porphyry system at depth, as indicated by: widely known prospective geology, including diatreme breccias; associated high sulphidation alteration; gold and copper mineralization; and geophysics (Schmidt, R.G., 1978, The Potential for Porphyry Copper-Molybdenum Deposits in the Eastern United States, U.S. Geological Survey). Pancon's 100%-owned, 1,500-acre Jefferson Gold Project nearly completely surrounds the 1,000-acre former Brewer Gold Mine property, and both Jefferson and Brewer are located 12 kilometers northeast along trend from the producing Haile Gold Mine, which produced 146,100 ounces of gold in 2019 (https://oceanagold.com/operation/haile/).

To view the source version of this press release, please visit https://www.newsfilecorp.com/release/68237