The geophysical survey marks a major step in advancing exploration on this property, which is prospective for both oxide gold near surface, and copper-gold-zinc-silver assemblages in buried VMS bodies.

Merlin Marr-Johnson, EVP of Salazar Resources said, "Ground gravity geophysics is a proven tool in VMS exploration, so it is exciting to be starting this program at Macara. Several blind massive sulphide deposits have been discovered using joint interpretation of geological and geophysical models, including Neves-Corvo and Lagoa Salgada in Portugal, Valverde and Las Cruces in Spain, and the Tambo Grande deposits in Peru, just 90 km to the southwest of Macara."

"The presence of good gold grades in silica-barite stockworks at the higher elevations and disseminated pyrite, chalcopyrite, and bornite in the pillow lavas at lower elevations in the creek indicate that the geology of Macara is mineral-rich. Clearly the optimum result would be for the geophysical survey to generate some bullseye targets representative of extremely dense material to be drill-tested. We look forward to having the survey finished shortly with an interpretation to follow, so that we can incorporate drilling at Macara into Salazar's exploration plan for 2021. With drilling underway at our Los Osos exploration project too, we are making solid progress in line with our strategy to make commercial discoveries in Ecuador."

The geology at Macara consists largely of volcanic rocks of Cretaceous age, known locally as the Celica formation. Over the border in Peru, the same aged rocks, known locally as the Lancones Formation, host the Tambo Grande ("TG") Cu-Zn-Au-Ag VMS deposits. Three unusually large VMS deposits occur within the vicinity of the town of Tambo Grande, Peru, approximately 90 km from Macara. The deposits are estimated to contain over 300 Mt of material1. An oxide resource at the TG1 orebody contains an estimated 16.7 Mt grading 3.5 g/t gold and 64 g/t silver in the barite cap. The underlying sulphide ore at TG1 is estimated to contain 108.7 Mt grading 1.6% copper, 1.0% zinc, 0.5 g/t gold and 22 g/t silver. 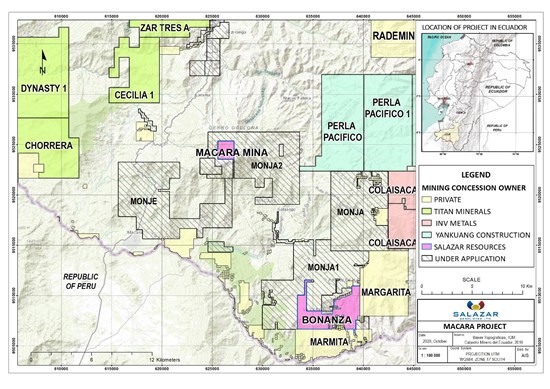 The Macara Mina licence has been digitally mapped to provide a topographic model accurate to 5 cm. The geophysical survey will comprise seventeen lines, spaced 100 m apart, for 31 line-kilometres in total. Magnetic and gravity measurements will be taken approximately every 100 m. Deep Sounding, High Resolution Geophysics, Peru, has been contracted to carry out the work.

As previously reported (News Release dated July 11, 2019), mapping at Macara Mina has identified a suite of basalts, andesites, and pillow lavas interpreted to be part of a tholeiitic volcanic arc. Gold and base metal mineralisation is spatially related to a complex of hydrothermal breccias and stockworks in pillow lavas that are silicified to varying degrees and that occasionally host barite. Where the pillow lavas are brecciated, the pillows contain <1% pyrite, chalcopyrite and bornite with occasional sphalerite in the matrix, and there is less intense mineralization in the pillows themselves. Where the stockworks contain barite veinlets and exhibit more intense silicification, often characterized by iron oxide staining, the gold and silver grades are elevated. The Company previously reported grades of up to 9.94 g/t Au in soil, and 29.60 g/t Au in rock samples from Macara. 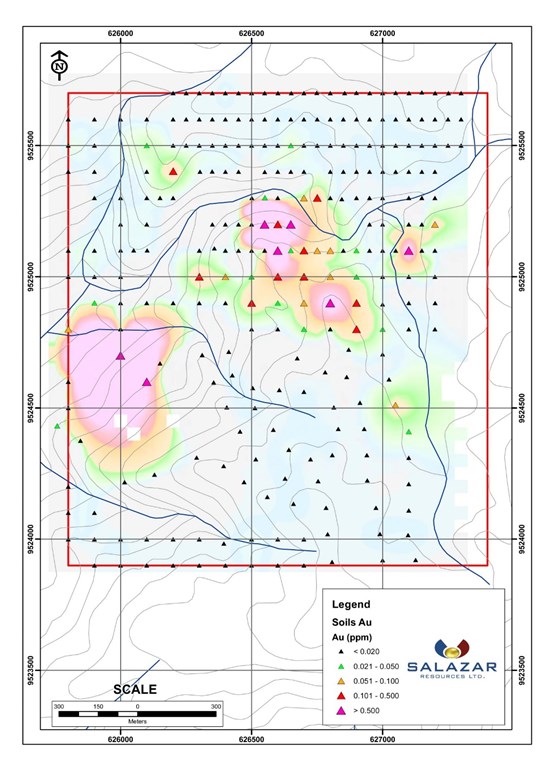 Salazar maintains a rigorous chain-of-custody and quality assurance/quality control program that includes the insertion of certified standard control samples and blanks, and re-analysis of samples with high levels (over limit) of gold, copper and zinc. All samples were analysed by Inspectorate Services Perú S.A.C. (Bureau Veritas), a certified ISO 17025:1999 and ISO 9001:2000 laboratory. The laboratory also maintains a QAQC program that includes insertion of blanks, standards and duplicate reanalysis of selected samples. Gold was analysed by fire assay - atomic absorption spectroscopy (FA-AAS). Silver, copper, zinc and other elements were analyzed by aqua regia extraction with an Inductively Coupled Plasma - Mass Spectroscopy (ICP-MS) finish.

Kieran Downes, P. Geo., a Qualified Person as defined by National Instrument 43-101, has reviewed and verified the technical information provided in this release.

Salazar Resources (SRL.V) (CCG.F) is focused on creating value and positive change through discovery, exploration and development in Ecuador. The team has an unrivalled understanding of the geology in-country and has played an integral role in the discovery of many of the major projects in Ecuador, including the two newest operating gold and copper mines.

Salazar Resources has a wholly-owned pipeline of copper-gold exploration projects across Ecuador with a strategy to make another commercial discovery and farm-out non-core assets. The Company actively engages with Ecuadorian communities and together with the Salazar family it co-founded The Salazar Foundation, an independent non-profit organisation dedicated to sustainable progress through economic development.

To view the source version of this press release, please visit https://www.newsfilecorp.com/release/67938

Sign up to receive news releases by email for Salazar Resources Limited or all companies belonging to the Mining and Metals industry.