Vancouver, British Columbia--(Newsfile Corp. - November 2, 2020) - First Vanadium Corp. (TSXV: FVAN) (OTCQX: FVANF) (FSE: 1PY) ("First Vanadium" or the "Company") is pleased to announce results from its first reverse circulation drill hole designed to provide an initial penetration into a potential gold target opportunity below the vanadium resource on its Carlin Vanadium-Gold Property on the Carlin Gold Trend in Nevada. The gold opportunity was identified by renowned geologist and mine-finder Dave Mathewson, a former Newmont Regional Exploration Manager who is the Company's Geological Advisor and is the Qualified Person spearheading and supervising the gold drilling program.

Dave Mathewson states, "With our very first hole we have drilled into a significant large-scale Carlin-type gold system at a reasonable depth, much like I have seen elsewhere in the Carlin Gold Trend. Typical Carlin-type deposit system geochemistry and alteration were encountered in this hole, indicated by gold (Au), arsenic (As), mercury (Hg), antimony (Sb), and thallium (Tl). This, along with other critical features including key rock formations, collapse brecciation and strong alteration (silica-pyrite+/-arsenopyrite-dolomite-realgar) make it potentially analogous to other important Carlin-type deposit systems such as Nevada Gold Mines' massive Gold Quarry deposit (13 miles to the northwest). Because of the significance of this first hole, we are immediately resuming reverse circulation drilling for the purpose of assessing the extent and strength of the system and to begin vectoring into hot spots within the system."

Today, the Company will post on its website www.firstvanadium.com a short video by the CEO and Dave Mathewson speaking on this news release.

A schematic cross-section follows of Mr. Mathewson's Carlin gold target model that he has used successfully to find Carlin-type deposits and modified with the information gained from RC20-01. According to his extensive experience in Carlin gold systems, Mr. Mathewson interprets and positions this hole relative to the potential gold zones that may exist on the property. This model will be used to direct further exploration drilling. 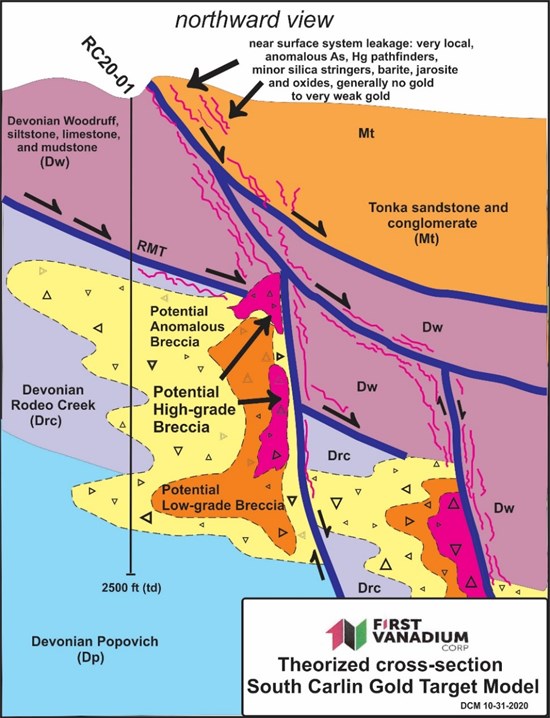 RC20-01 started in upper plate Woodruff Formation, host of the vanadium deposit, encountering the Roberts Mountain Fault at about 975' (297m) depth. The Woodruff unit gradually became more silicified and pyrite-bearing with depth and had intermittent elevations in gold, arsenic and mercury.

Lower plate Rodeo Creek Formation was cut in RC20-01 from about 975' (297m) to 2025' (617m) depth. The unit was moderate to strongly silicified, pyrite+/- arsenopyrite-bearing and with moderate to strong consistent arsenic and mercury elevations, typical of Carlin-style gold systems, including secondary Fe-dolomite, decalcification and collapse brecciation. Eighty-five percent of the unit was elevated in gold between 5-146 ppb.

Highly altered Popovich limestone was cut in RC20-01 from 2025' (617m) to the end of the hole at 2500' (762m). This unit was very strongly silicified, pyrite+/-arsenopyrite-bearing and with moderate to strong consistent arsenic and mercury elevations and stronger longer sections of collapse brecciation and Fe-dolomite.

This first pass reverse circulation drill program consisted of two vertical holes spaced 4,593' (1,400m) apart along the projection of the north-south master structure. RC20-01 reached the planned depth of 2500' (762m). RC20-02 located 330' (100m) from silicified gold-bearing surface exposures with arsenic and mercury, reached a depth of 1160' (354m) where it was abandoned due to artesian conditions. Realgar and arsenopyrite were noted periodically from 450' (137m) to the bottom of RC20-02, with the last 15' (4.6m) exhibiting 20-80% realgar. Realgar and arsenopyrite minerals are typical in Carlin gold systems associated with gold. To reach the original intended target depth, RC20-03 was drilled from the same site as RC20-02 at a 60o angle towards the gold-bearing silicified surface exposures. This hole also encountered artesian conditions and was abandoned at 840' (256m). Casing was left in the hole so that this hole could be deepened in the future. Assays for holes RC20-02 and RC20-03 are pending.

The drilling program has been supervised by Mr. Dave Mathewson, MSc., Geological Advisor for the Company and Qualified Person for the program. Industry standard quality control and quality assurance protocols have been followed in handling, sampling and shipping the chip. Samples were analyzed by ALS Global.

With the first pass drilling confirming that a large-scale Carlin style gold system is present on the property, the Company is immediately resuming reverse circulation drilling with the design to further assess the extent and strength of the system and to begin vectoring towards the heart of the system.

ON BEHALF OF FIRST VANADIUM CORP.

Technical disclosure in this news release has been reviewed and approved by Dave Mathewson., a Qualified Person as defined by National Instrument 43-101, and Geological Advisor to the Company.

To view the source version of this press release, please visit https://www.newsfilecorp.com/release/67324

Sign up to receive news releases by email for First Vanadium Corp. or all companies belonging to the Mining and Metals, Energy Metals industries.