Michael Bennett, President and CEO, stated, "The new soil lines at Maria Bonita have revealed a much larger and stronger soil anomaly than was previously known and the gold values in soils are higher than the values that exist directly above the known mineralized zones which are located 5km to the east and comprise the current resource base. This is a very exciting development and suggests the possible existence of an additional deposit within the Cajueiro project. Further soil sampling will be required to define the eastern and western limits to the gold-in-soil anomaly followed by trenching and drilling." 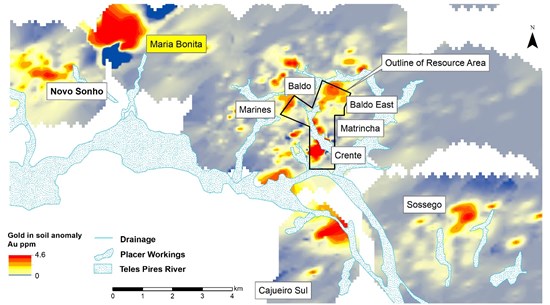 Until recently, a single N-S soil line was completed in the Mara Bonita area and returned a number of anomalous gold values immediately NE of a stream which drains to the south and has been heavily worked in the past for placer gold (Figure 2).

Three additional N-S trending soil lines were recently completed either side of the initial soil line and confirmed the presence of a significant gold-in-soil anomaly over and E-W distance of 700m and a N-S extent of 1000m (Figure 2). Approximately 76% of the soil samples from the three new lines returned gold values above 100ppb to a maximum of 3.1 g/t gold making it the largest and strongest gold anomaly in the Cajueiro concession area. The anomaly is open for up to 600m to the east but is strongest on the western-most line and is open to the west.

Additional soil sampling is planned in order to determine the western and eastern limits of the anomaly, which is now the largest and strongest gold-in-soil anomaly so far identified at Cajueiro, and almost certainly explains the source of placer gold that was historically mined in this part of the project.

Given the success that surface trenching has had in identifying mineralized structures in the area of known resource (see press release dated 22nd October 2020), trenching is also being planned for the Maria Bonita area, in advance of drilling. 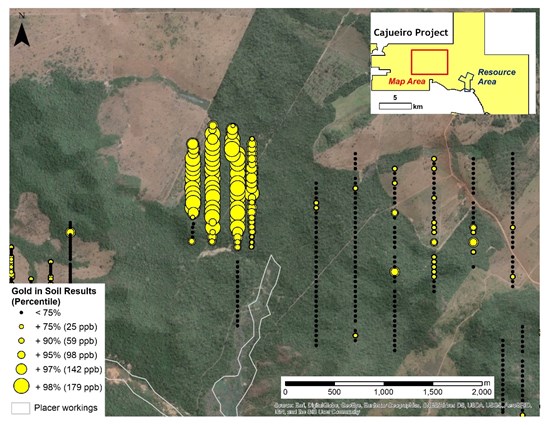 A total of 14,000m of drilling (105 holes) and over 4,000m of trenching have been completed to date within 285ha in the central part of the 22,935ha claim package (or 1% of the Cajueiro project area). Numerous other gold-in-soil anomalies remain untested.

To view the source version of this press release, please visit https://www.newsfilecorp.com/release/66955