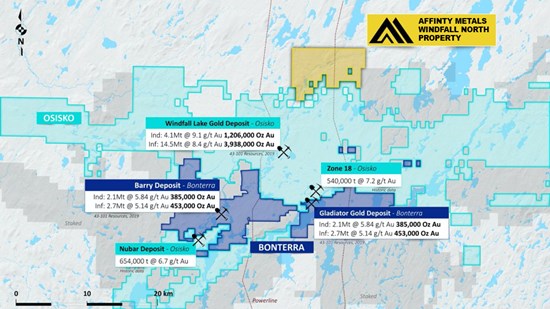 The Abitibi Greenstone Belt, along with the Fraser Institute deeming it the 4th most attractive mining jurisdiction in the world, is home to dozens of world class deposits including:

The Abitibi is renowned as the world's largest mineral-rich greenstone geological belt. The geological structure spans 450 km long by 150 km wide and runs through the Canadian Shield, from west of Timmins, Ontario, then eastward to Chibougamau, Quebec. The region's history hosts over 100 mines that have aggregately produced an excess of 170 million ounces of gold. While the belt is known primarily for its prolific gold mines, base metal production in the region is also substantial at over 400 million ounces of silver, 15 billion tons of copper, and 35 billion tons of zinc.

The Windfall Lake Project is reportedly one of the highest grade resource-stage gold projects in Canada and continues to grow as more discoveries are made. Osisko recently reported Windfall Lake indicated resources of 2.39 million tonnes at 9.1 g/t Au (1,206,000 oz. gold) and inferred resources of 10.61 million tonnes at 8.4 g/t. (3,938,000 oz. gold). Osisko has defined the resource approximately 2000m on strike and 1500m depth, and continues to drill at an impressive pace. They hit the million meter drilling mark earlier this year in anticipation of an updated resource estimate in the later part of 2020 and a feasibility study to come out next summer.

In 2018, a Preliminary Economic Assessment (PEA) forecast was done on the Windfall Lake Project. At the time it contained around 3 million oz. gold. As it stood then, it would cost $397 million to build the mine that would produce an average of 218,000 oz. gold annually, over 8.1 years. The study projected an after-tax internal rate of return of 32.7% and a net present value of $413.2 million using a discount rate of 5%.

The PEA in 2018, indicated Windfall had very strong economics with a $1,300 gold price and a 6.7 g/t gold grade deposit. With gold in the $1,900's and an inferred resource estimate of 9.1 g/t Au, the Windfall project has exponentially grown in value. The region will become even more profitable by the means of a 30-year Grande Alliance agreement. The agreement covers road, rail, port and power infrastructure in the region, including a powerline from Lebel-sur-Quévillon directly to the Windfall site.

Mick Carew of Haywood Securities commented in a northern miner article (dated May 29, 2019), on the growing results, and states they "reflect the continued assertion that Windfall is part of a larger, dynamic gold mineralized system" and "demonstrate the significant exploration potential beyond the immediate footprint of the current Windfall resource." 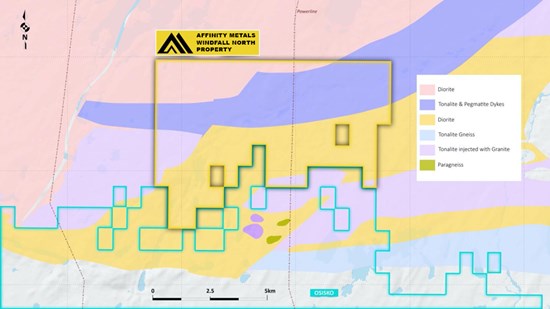 Affinity's North Windfall claims are located along the contact of a dioritic gneiss terrain and a granitic terrains. It is strategically positioned directly along the Windfall and Romeo faults and is located approximately 9 km NNE from Osisko's Windfall Lake project.

The Windfall fault, which is interpreted to represent the ductile level root feeder system that plumbs and controls the location of Osisko's Windfall deposit model, is interpreted to continue northeast into Affinity's Windfall North claim holdings along strike where it diverges into two separate structural traces and subducts beneath the granitic pluton.

Affinity staked the North Windfall claims based on the interpreted northeast trend of the Windfall Lake Fault from the Windfall Lake gold deposit and plans to conduct a geological and geophysical data compilation in order to generate drill targets.

The Qualified Person for this news release for the purposes of National Instrument 43-101 is Kevin Montgomery, P.Geo. and he has read and approved the scientific and technical information that forms the basis for the disclosure contained herein.

The Regal project is located near Revelstoke, BC in the northern end of the prolific Kootenay Arc and hosts several major geophysical anomalies as well as three historic small-scale past producing mines. An exploration program, including in excess of 3,000 meters of drilling, is presently underway on the project.

The Company can be contacted at: info@affinity-metals.com

Information relating to the Company is available at: www.affinity-metals.com

To view the source version of this press release, please visit https://www.newsfilecorp.com/release/66270

Sign up to receive news releases by email for Affinity Metals Corp. or all companies belonging to the Mining and Metals industry.