Vancouver, British Columbia--(Newsfile Corp. - August 31, 2020) - Discovery Harbour Resources Corp. (TSXV: DHR) (OTC Pink: DCHRF) (FSE: 4GW) (the "Company" or "Discovery Harbour") is pleased to provide a detailed description of targets for the 10 drill sites in five separate mineralized areas. Further to the Company's June 3, 2020 press release, it has submitted an Exploration Plan of Operations (the "Plan") to the United States Forest Service ("USFS") to advance the Company's planned drill program at the Caldera gold project, which lies in a fertile gold region at the intersection of the Walker Lane and Northumberland Gold Belts northwest of Tonopah, Nevada.

Mark Fields, the Company's President and CEO, states, "Our plan is to drill 100 to 300 metres deeper than any previous drilling for which we have records on the Caldera gold project. We have selected 10 targets from no less than 33 targets within five of the eight distinct gold mineralized areas at Caldera. Figure 1 outlines the locations of the 10 drill sites (A through J), each having the potential to deliver a significant high grade intercept. Our recent financing provides us with the funds required for our drill program which we expect to undertake this fall." 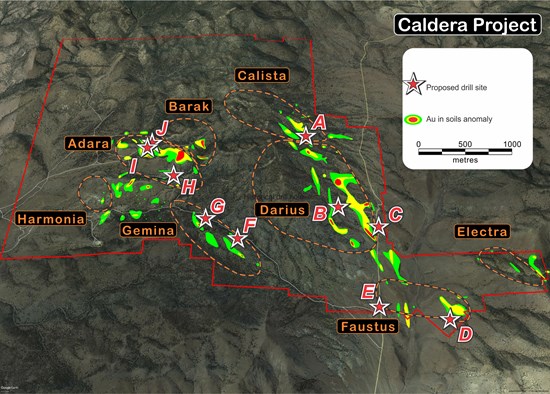 Mr. Fields continues, "Figure 2 to is a conceptual construction of historical drill results and, based on the data we have compiled and developed, is our interpretation of where high-grade gold mineralization is thought to exist. This is the discovery opportunity provided by drilling deeper. We believe the high-grade gold occurrences historically drilled at or near surface were deposited by a deeper low sulphidation epithermal gold system. All of the data we have analyzed also support our theory that the gold system is intact." 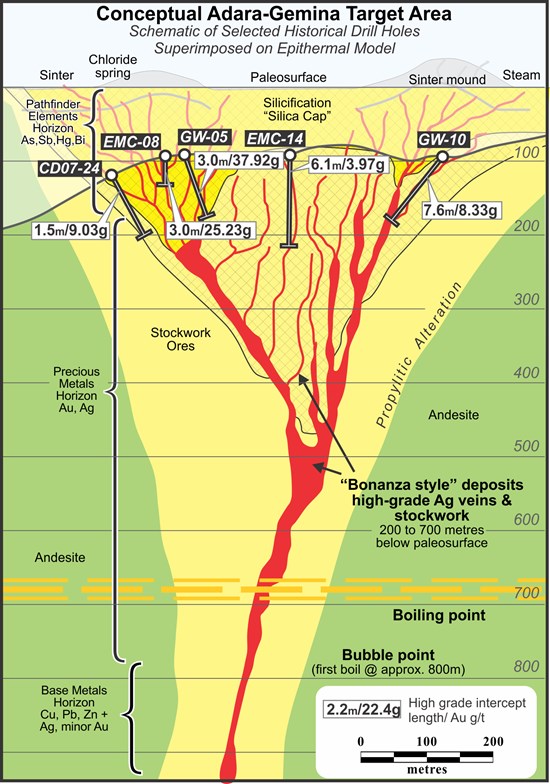 The five (of eight) mineralized areas (Adara, Calista, Darius, Faustus and Gemina) selected for drill site permitting were described in detail in our January 9, February 10 and March 4, 2020 Company news releases. This news release in turn describes the specific targets which will be tested from each drill site.

The key features which were evaluated to choose each of the sites for which the drill permit application was made were:

A detailed description of each drill target is provided in Appendix A. 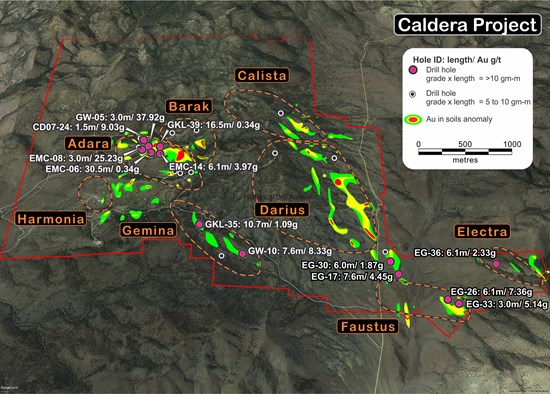 The Company commenced the drill permitting process late last year. Since then, it has selected the specific drill sites and engaged Nevada contractors to conduct the baseline studies necessary for the environmental impact analyses required under the Plan, which has been submitted to the USFS for required regulatory review. Future drilling is subject to USFS review and approval as well as approvals of other regulatory agencies.

Discovery Harbour's 100%-optioned Caldera property was generated by Don Merrick and John Zimmerman of Genesis Gold Corporation, a private Utah company specializing in gold exploration in the Western United States (www.genesisgoldcorp.com), the foundation of which are the claims first staked by Zsolt Rosta.

Mark Fields, P.Geo., is the Qualified Person for Discovery Harbour as defined in NI 43-101 and has reviewed and approved the technical contents of this news release.

For more information, please visit the Company's website at www.discoveryharbour.com.

ON BEHALF OF THE BOARD OF DISCOVERY HARBOUR RESOURCES CORP.

In order to facilitate the permitting procedure, Discovery Harbour has elected to apply for only the most easily accessible target requiring minimal road preparation within the Calista area, which is shown as "A" in Figure 1 above.

In the immediate vicinity of "A" the following results supported its selection for drilling:

The Darius area contains a total of eight targets. There are a number of structural trends that, in contrast to the Calista area, trend more northerly at approximately 340 degrees.

Application has been made for a permit to drill two sites in the Darius area, shown as "B" and "C" in Figure 1 above.

In the immediate vicinity of "B" the following results supported its selection for drilling:

In the immediate vicinity of "C" the following results supported its selection for drilling:

The Faustus area contains three targets. Targets within this area demonstrate two contrasting structural trends, one being northwesterly and the other northerly. The Faustus area also marks the southeast extent of a regional magnetic low that underlies much of the Caldera property, which Discovery Harbour has interpreted to represent the alteration zone associated with the low-sulphidation epithermal system.

Application has been made for a permit to drill two sites in the Faustus area, shown as "D" and "E" on Figure 1 above.

In the immediate vicinity of "D" the following results supported its selection for drilling:

In the immediate vicinity of "E" the following results supported its selection for drilling:

The Gemina area is typical of a number of the defined target areas in that it possesses numerous targets based on historical workings, well defined structural zones and strongly anomalous gold results in shallow drill holes. Gemina's six targets are over a notably long strike length that has been defined through exposures and previous drilling. The alteration zone associated with the structures is broad, characterized by a combination of quartz and chalcedony at various locations.

Application has been made for a permit to drill two sites in the Gemina area, shown as "F" and "G" in Figure 1 above.

In the immediate vicinity of "F" the following results supported its selection for drilling:

Highlights of the historical drilling include the following:

In the immediate vicinity of "G" the following results supported its selection for drilling:

The Adara area contains eight targets and includes the historic Golden King Mine. Historical drilling intersected sporadic high-grade shallow intercepts which are interpreted to be associated with west to northwest trending structures.

Application has been made for a permit to drill three sites in the Adara area, shown as "H"," "I and "J" in Figure 1 above. "I" and "J" are alternate sites to provide flexibility in the permitting process as the same target can be tested from either site.

In the immediate vicinity of "H" the following results supported its selection for drilling:

In the immediate vicinity of "I" and "J" the following results supported its selection for drilling:

Highlights of the historical drilling include the following:

To view the source version of this press release, please visit https://www.newsfilecorp.com/release/62795

Sign up to receive news releases by email for Discovery Harbour Resources Corp. or all companies belonging to the Mining and Metals industry.