As Meguma and Osprey work toward finalizing the previously announced plan of arrangement (see joint news release dated June 10, 2020), management and technical teams from both companies have been reviewing data from the combined project portfolio and prioritizing targets, budgets, and work plans for an aggressive first phase of work expected to commence immediately following the closing of the plan of arrangement. The combined database supports plans for an extensive multi-phase drilling campaign to test numerous targets on several projects within the combined portfolio. The initial exploration focus of the combined entity will be developing target areas within a close proximity of St Barbara Limited's ("St Barbara") operating Touquoy Mine in the Moose River Gold Mines area, which includes Osprey's Caribou project and MegumaGold's Killag and Touqouy West properties.

"We've been very busy over the past couple of months on the corporate side, working with MegumaGold to complete the proposed business combination", said Osprey President Cooper Quinn. "Contemporaneously, we have been working on the technical and exploration side; communicating closely with MegumaGold's technical team to prioritize projects across the combined company and ensure a seamless transition. The exploration potential of the combined land package has yet to be materially tested and we're excited to be prioritizing drill targets which we believe have the potential to expand our existing gold resources, and potentially discover new disseminated gold deposits in the area. I look forward to drilling these exciting targets."

MegumaGold President Theo van der Linde commented, "Our team has been working diligently on developing high priority targets at the Touquoy West property. These target areas are represented by large newly identified soil and IP anomalies, which have yet to be drill tested. Our recent exploration activities have confirmed that disseminated sulphide mineralization is present in the Moose River anticlinal structure and we are continuing to expand on that story as the Touquoy West property takes shape. Concurrently, our amalgamation with Osprey provides shareholders of both groups with a very compelling story of exploration successes and mineral resources in the Caribou deposit."

During 2019, Osprey conducted UAV geophysical surveys over the Goldenville Gold Project and the Caribou gold project, the latter of which is located approximately 12 kilometers on existing roads from St Barbara Minerals Moose River Consolidated operating mill. Magnetic and ortho-imagery were collected and compiled. When combined with existing data on geology and mineralization, detailed structural analysis was completed, and areas were highlighted for future exploration and drill work. Specifically, northwest-trending lineaments were identified that intersected with areas of known mineralization, and lesser explored areas. 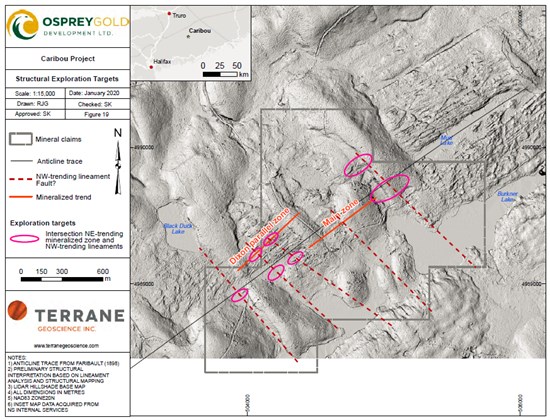 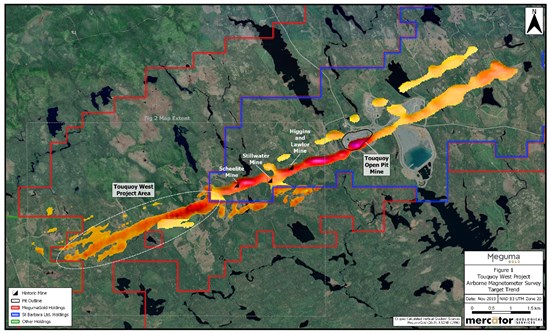 Combined results of these programs define three high priority target areas on the Touquoy West property. The IP survey chargeability responses detected at Touquoy West, which are in part spatially associated with existing soil geochemistry, magnetometer, and VLF-EM anomalies, may indicate the presence of disseminated sulphide mineralization similar in style to that present adjacent to the Touquoy gold deposit located a few kilometres to the east along the Moose River Anticlinal trend. 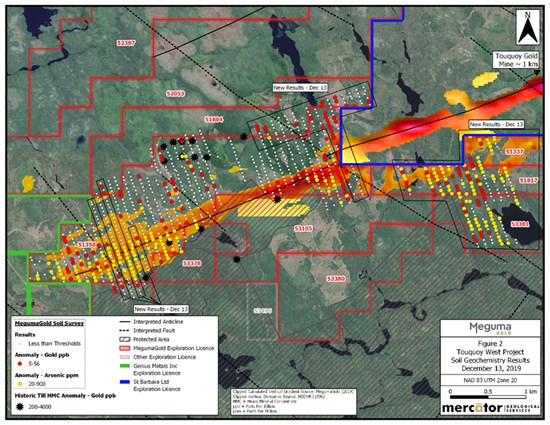 MegumaGold President Theo Van der Linde stated, "These are exciting targets that represent valuable information not previously known in the area and our team is currently permitting these targets and preparing for a maiden diamond drilling campaign."

The three main arsenic-gold anomalies referred to in the figures above parallel the interpreted northeast trend of the Moose River anticlinal fold corridor and are developed in areas either directly overlying, or to the south of, the interpreted main fold hinge zone. This fold corridor structural association is interpreted by the Company to have geological similarities to that of the Touquoy Gold Mine deposit, located within the same anticlinal corridor approximately 2.5 km northeast of the new anomaly described above. As reported previously, the western-most anomaly on the Touquoy West Project survey grid remains open onto the adjacent Genius Metals Inc. property to the west that was optioned by MegumaGold.

This press release has been reviewed and approved by Regan Isenor, Chief Executive Officer of MegumaGold Corp. Paul Ténière, M.Sc., P.Geo. of Mercator Geological Services Ltd. and Perry MacKinnon, P.Geo., Vice President of Exploration of Osprey, both "Qualified Persons" as defined under NI 43-101, have prepared and approved the scientific and technical information disclosed in this press release.

This press release contains scientific and technical information with respect to adjacent or similar mineral properties in the Meguma goldfields and Touquoy Gold Mine deposit, which the Company's have no interest in or rights to explore. Readers are cautioned that information regarding mineral resources, geology, and mineralization on adjacent or similar properties is not necessarily indicative of the presence of mineralization on the Company's properties.

All statements in this presentation, other than statements of historical fact, are "forward-looking information" with respect to MegumaGold and Osprey within the meaning of applicable securities laws including, without limitation economic estimates and any statements related to the proposed transaction, proposed board and management changes and shareholder and exchange approvals. MegumaGold and Osprey provide forward-looking statements for the purpose of conveying information about current expectations and plans relating to the future and readers are cautioned that such statements may not be appropriate for other purposes. By its nature, this information is subject to inherent risks and uncertainties that may be general or specific and which give rise to the possibility that expectations, forecasts, predictions, projections or conclusions will not prove to be accurate, that assumptions may not be correct and that objectives, strategic goals and priorities will not be achieved. These risks and uncertainties include but are not limited to exploration findings, results and recommendations, results of due diligence investigations, ability to raise adequate financing, shareholder and exchange approvals in respect of the transaction and unprecedented market and economic risks associated with current unprecedented market and economic circumstances, as well as those risks and uncertainties identified and reported in MegumaGold's and Osprey's public filings under its respective SEDAR profile at www.sedar.com. Although MegumaGold and Osprey have attempted to identify important factors that could cause actual actions, events or results to differ materially from those described in forward-looking information, there may be other factors that cause actions, events or results not to be as anticipated, estimated or intended. There can be no assurance that such information will prove to be accurate as actual results and future events could differ materially from those anticipated in such statements. MegumaGold and Osprey disclaim any intention or obligation to update or revise any forward-looking information, whether as a result of new information, future events or otherwise unless required by law.

Neither the CSE nor TSXV has approved or disapproved the contents of this news release or passed upon the merits of any of the transactions described herein, including the Transaction.

Neither the CSE, TSXV nor their Regulation Services Providers (as that term is defined in the policies of the TSXV) accepts responsibility for the adequacy or accuracy of this release.

To view the source version of this press release, please visit https://www.newsfilecorp.com/release/61367

Sign up to receive news releases by email for Osprey Gold Development Ltd. or all companies belonging to the Mining and Metals, Precious Metals industries.