Toronto, Ontario--(Newsfile Corp. - August 6, 2020) - Generic Gold Corp. (CSE: GGC) (FSE: 1WD) ("Generic Gold" or the "Company") is pleased to announce that it has initiated a contract with Laurentia Exploration Inc. to manage its exploration work on the recently acquired Belvais Project ("Belvais" or the "Project") located near the town of Normétal, Quebec, adjacent to Amex Exploration Inc.'s flagship Perron Project. Laurentia Exploration is a full service exploration provider that has been involved in the discovery of multiple gold and base metal discoveries, largely in Quebec. Laurentia is led by a dynamic group of geoscientists with expertise in orogenic gold and VMS mineralization systems. Laurentia has particular experience in the Belvais area, having been neighbouring Amex Exploration's sole geological service provider and project manager since November of 2018.

Laurentia will complete a comprehensive review of all existing government and past exploration data on the Belvais project in order to plan and prepare for an inaugural exploration program in the fall of this year. The Belvais project is divided into three separate properties, as shown in figure 1, namely the East, Centre, and West block. Each of the three properties are situated proximal to the roughly east-southeast trending Normétal fault and the regional Chicobi deformation zone.

The West block, covering 2,136 hectares, is contiguous with and on-trend to Amex Exploration's Perron gold project, who has made numerous high-grade discoveries, and it contiguous to the past-producing Normétal mine, which operated from the 1930's through to 1975 from surface to a depth of 2.4 km. It is underlain by stratified felsic to intermediate volcanic rocks of the Normétal South formation, as well as sediments of the Chicobi group.

The Centre block, comprising 2,905 hectares, covers approximately 12 km of the Normétal fault and the associated Normétal mine horizon, which is the host rock to the past-producing Normétal VMS mine. The Centre block is also host to a significant number of electromagnetic anomalies, compiled by the government of Quebec and available on the SIGEOM geological system.

The East block, covering 3,110 hectares, covers the eastern extension of the Normétal fault, and is contiguous with claims held by Osisko Metals. Of particular interest is a package of claims approximately 2 km from the East block that was recently acquired by IAMGold Corporation. The East block is underlain by mafic to intermediate volcanic rocks as well as a portion of the neoarchean Val-St-Gilles pluton.

Historically, many exploration companies have completed small campaigns on the Belvais project, including airborne geophysics, ground geophysics, diamond drilling, geological mapping, prospecting, and soil sampling. In addition, the region was the subject of a PhD thesis entitled "RECONSTRUCTION D'UN ENVIRONNEMENT DE SULFURES MASSIFS VOLCANOGÈNES DÉFORMÉ: EXEMPLE ARCHÉEN DE NORMÉTAL, ABITIBI." completed by Benoit Lafrance, 2003. All of the available information will be compiled by Laurentia in 2 and 3D in order to define an exploration program for the Belvais Project.

Figure 1: Geological map of the Belvais Project, with respect to Amex Exploration's Perron project and the past-producing Normétal VMS mine 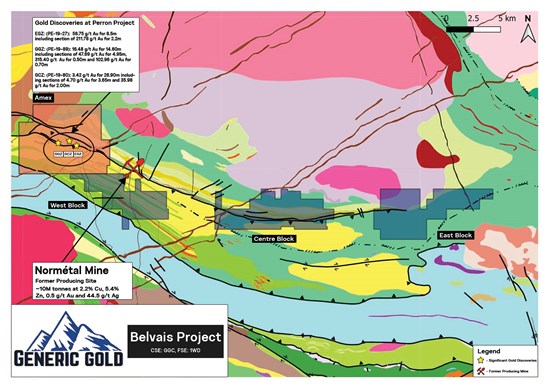 Generic Gold is a Canadian mineral exploration company focused on gold projects in the Tintina Gold Belt in the Yukon Territory of Canada and the Abitibi Greenstone Belt in Quebec, Canada. The Company's Yukon exploration portfolio consists of several projects with a total land position of greater than 35,000 hectares, all of which are 100% owned by Generic Gold. Several of these projects are in close proximity to significant gold, including Goldcorp's Coffee project, Victoria Gold's Eagle Gold project, White Gold's Golden Saddle project, and Western Copper & Gold's Casino project. The Company's Quebec exploration portfolio consists of three properties covering 8,148 hectares proximal to the town of Normétal. Generic Gold's board of directors and management team is led by experienced mining industry professionals, with expertise in exploration, finance, capital markets, and mine development. For information on the Company's property portfolio, visit the Company's website at genericgold.ca.

To view the source version of this press release, please visit https://www.newsfilecorp.com/release/61219