"The magnitude of what was discovered at Windy in such a small area across four short exploration campaigns confirms that we are, in fact, in an extremely prospective high-grade gold mineralizing zone. The Windy Gold Zone represents just one of nine underexplored gold mineralization zones on the Wishbone property and we are incredibly excited about the remainder of our 2020 season if the opportunity we see at Windy is an indication of the property's potential as a whole," states Blake Morgan, Company President.

The Windy Zone is situated within the northern part of the Wishbone property and was the primary target area of interest through Teck's 1981 to 1988 exploration programs on the property. Subsequent to Teck in 1981 and 1982 discovering a concentration of markedly high gold grades in soils (see Company news release dated July 15, 2020) and the discovery of the first gold bearing quartz vein in 1986, Windy was subject to a more comprehensive prospecting and trenching program in 1987.

At the conclusion of the 1987 exploration program, seven gold mineralized quartz-sulphide veins were discovered within a small 400 x 500 metre area (Figure 1). A total of 45 trenches, totalling 398 linear metres, were excavated to bedrock with 344 rock chip samples collected and assayed for gold and silver.

The Main Vein trending E-W along Line 600 South and dipping steeply to the north was traced for 500m in length with a width of 6.7 metres at its widest exposure in the most eastern trench reporting a 3.3m chip sample grading 7.8 g/t Au, including 19.1 g/t Au over 1.1m. 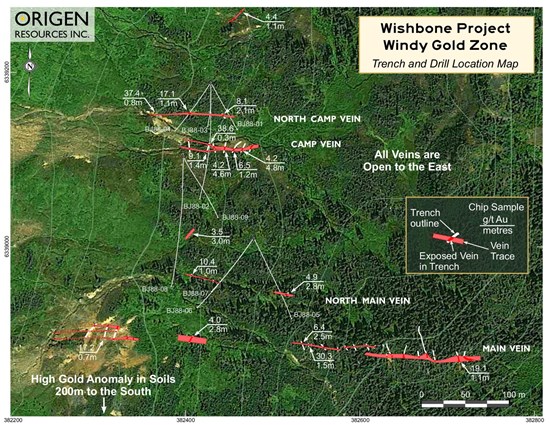 A vein which occurs about 60 m north of the Main Vein designated as North Main Vein is uncovered in only four places along a 125 m length. The most eastern trench returned chip samples averaging 4.9 g/t Au over a 2.8 m and in the most western trench one chip sample assayed 10.4 g/t Au over 1.0 m.

About 35 m north of the Camp Vein another vein, designated the North Camp Vein, returned chip samples grading 17.3 g/t Au over 1.8 m and 8.1 g/t Au over 2.1 m from two trenches 78 m apart with reports of visible gold panned from the soil in the trenches.

Of note, all the veins are open along strike and appear to be thickening to the east, however the historical field crews were unable to further expose the veins by hand trenching in this direction due to the increasing depth of overburden.

Trench rock chip highlights from the Windy Zone include:

Chip sampling was accomplished with a moil and hammer with the samples sent to ACME Analytical Labs in Vancouver for analysis. Standard fire-assay techniques were utilized. Quality assurance and quality control ("QA/QC") measures were not documented, however a qualified person for Origen considers that the quality of the work, the established standing of the operator and the use of a reputable analytical laboratory supports that the chip sample results disclosed are suitable for guidance and characterization of the area at the current stage of exploration. The channel samples disclosed in this news release were sourced directly from geological maps and assay certificates within assessment reports available on the ARIS (Assessment Report Indexing System) collection of technical assessment reports administered by the B.C. Geological Survey. The current exploration field crew will aim to verify the location of the historical trenches and collect representative chip samples where viable.

In 1988 Teck drilled nine (9) holes totalling 1,353.2m to test the down dip extent of the gold bearing quartz veins uncovered in the 1987 exploration program. All the drill holes intersected notable gold bearing mineralization with the latter portion of hole BJ88-02 providing the longest mineralized widths in a silicified breccia zone.

Of note, due to the design of the drill program only a narrow 100 m wide North-South corridor transecting the gold bearing quartz veins was drill tested. This represents a small portion of the prospective area and the apparent thickening of the quartz veins in the western portion was not tested.

Drilling highlights from the Windy Zone include:

Core sample intervals ranged from 30 cm to 2.0 metres in length and were sent to ACME Analytical Labs in Vancouver for analysis with standard fire-assay techniques. Duplicates and standards were not inserted into the sample series for QA/QC measures, however a qualified person for Origen considers that the quality of the work, the established standing of the operator and the use of a reputable analytical laboratory supports that the drill hole results disclosed are suitable for guidance and characterization of the area at the current stage of exploration. The core sample results disclosed in this news release were sourced directly from geological maps, sections and assay certificates within assessment reports available on the ARIS (Assessment Report Indexing System) collection of technical assessment reports administered by the B.C. Geological Survey. The current exploration field crew will aim to verify the location of the historical drill collars, locate the drill core and if viable verify the historical results. The drill intervals reported in the news release are the down-hole core length. The Company has not performed sufficient work to determine the veins' orientation and calculate a true width for the drill intersections.

The exposed gold mineralized quartz veins are coincident with a number of the exceedingly high gold in soil geochemical samples collected in previous years (see Company news release dated July 15, 2020), however one of the areas reporting the greatest concentration of >1 g/t gold in soils remains unexplored to the south of the known quartz veins.

Origen geological crews are currently in the field to re-establish the historical work at the Windy Zone, evaluate the highly prospective areas defined through trenching and soil sampling, and design the program to make this prospect drill ready.

The Wishbone project sits prominently within British Columbia's Golden Triangle (Fig 1), a richly endowed mineral district in the northwest of the province. The Property contains numerous, underexplored gold vein, gold stockwork and copper-gold volcanogenic massive sulphide (VMS) prospects with the gold vein mineralizing event reporting a similar age as that of the mineralization at Brucejack.

Wishbone consists of a group of 10 claims totalling 3,832 ha approximately 45km northwest of Bob Quinn Lake on the Stewart-Cassiar highway (Hwy 37), 12km west of the Company's LGM property and is immediately adjacent to the east of the Galore Creek Mining Corp claim block (Fig 2).

The Property contains numerous, underexplored gold vein, gold stockwork and copper-gold porphyry prospects. This news release describes the background of one of the main prospects on the Wishbone claims.

Originally staked by Teck Explorations Limited in 1980 and operated until 1988. Teck conducted systematic detailed mapping, soil sampling and trenching which identified at least nine (9) mineralized zones over a N-S trend of approximately 10km length. Teck followed up with a nine hole drill program in 1988 totalling 1353.2m to test encouraging trench results developed from their multi-year exploration program at the Windy Zone.

To view the source version of this press release, please visit https://www.newsfilecorp.com/release/60283