"Acquiring a property with so many prospective targets in an area as productive as the Golden Triangle was a significant success for Origen. The parallels that we see across the multiple targets at Wishbone relative to the more advanced projects in the district highlights the scale and large potential of the Wishbone Property" states Blake Morgan, President.

The Wishbone project sits prominently within British Columbia's Golden Triangle (Fig 1), a richly endowed mineral district in the northwest of the province. The Property contains numerous, underexplored gold vein, gold stockwork and copper-gold volcanogenic massive sulphide (VMS) prospects with the gold vein mineralizing event reporting a similar age as that of the mineralization at Brucejack.

Wishbone consists of a group of 10 claims totalling 3,832 ha approximately 45km northwest of Bob Quinn Lake on the Stewart-Cassiar highway (Hwy 37), 12km west of the Company's LGM property and is immediately adjacent to the east of the Galore Creek Mining Corp claim block (Fig 2).

Wishbone was originally staked by Teck Explorations Limited in 1980 which they operated until 1988. Teck conducted systematic detailed mapping, soil sampling and trenching which identified at least nine (9) mineralized zones over a N-S trend of approximately 10km length (Fig 3). Reconnaissance soil sampling by Teck identified three prospective areas reporting pronounced >1 g/t high grade gold in soils; the Windy, Rat and Table target areas. Only sporadic exploration was conducted in the period subsequent to Teck's activities with the property remaining largely unexplored and the majority of the priority target zones witnessing almost no further work. 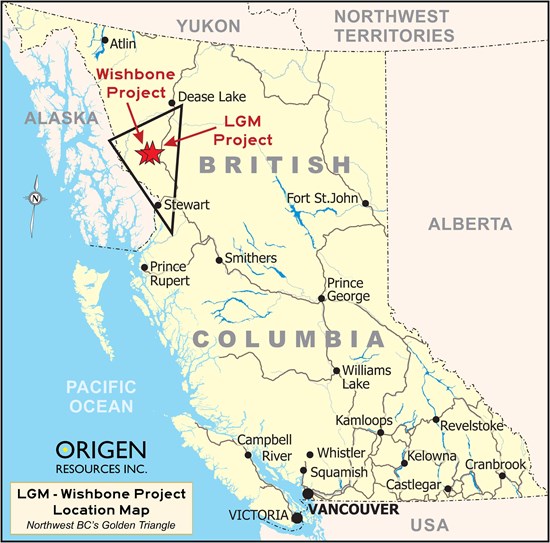 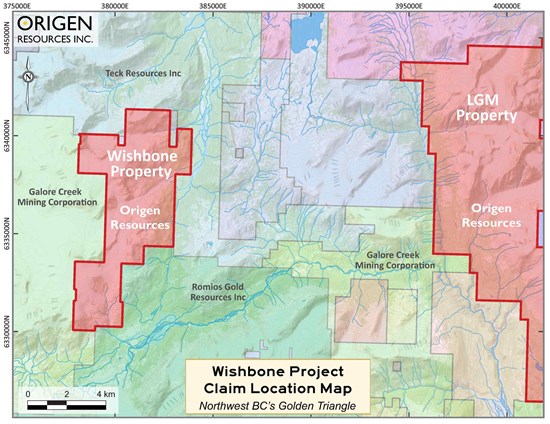 Of all the notable target zones on Wishbone, the Windy prospect has been subject to the greatest degree of attention. The cause is evident. Soil sampling in two separate programs (1981 and 1982) identified seven distinct sample sites reporting >1 g/t Au (equivalent to >1000 ppb Au). The most prominent anomalous area defined by a >100 ppb Au contour extends through the Windy soil grid for 1km with the best values concentrated on the southernmost survey line of the grid (Line 800 South).

Two adjacent samples on Line 800-S reported above the detection limit of 3 g/t Au and 175m to the west six consecutive sample stations, for a combined 150m in length, each reported >0.5 g/t Au in soil, with this last sample series located at the westernmost point of Line 800-S.

Follow up work by Teck in 1987 discovered a series of gold bearing quartz sulphide veins through trenching, with the Main vein traced on surface for over 400m. Several of the highly anomalous gold in soils can be associated with the uncovered quartz veins, however al least four of the distinct high gold in soil locations do not have an identified bedrock source. Of note, the greatest concentration of gold in soils on Line 800-S is apparently 200m south of the Main vein and may be a reflection of a different source.

Determining relative positions of the mineralization to Teck's exploration activities within the Windy target area will be a priority for the forthcoming fieldwork.

Upon further review and verification of the trenching and drilling conducted by Teck in 1987 and 1988, the Company will provide an update.

During 2019 reconnaissance sampling in the Rat area situated 3.5 kms south of Windy collected a mineralized grab sample in float that assayed >10 g/t gold (over range for the assay method). The three reconnaissance soil samples collected by Teck along a 1400m stretch of the ridge above Rat returned 410, 3100 and 910 ppb gold, which along with mapped veins at Rat definitely warrants follow-up and will be included in the first round of the 2020 fieldwork.

The third target with an associated reconnaissance soil sample >1,000 ppb gold is at Lynx situated approximately 5.6 kms south of Windy. Based on the position of the 1290 ppb gold in soil sample and the orientation of mapped veins, the retreating ice margin over the recent decades is expected to have provided more new prospective exposure at the Lynx target zone compared to the other showings at Wishbone. 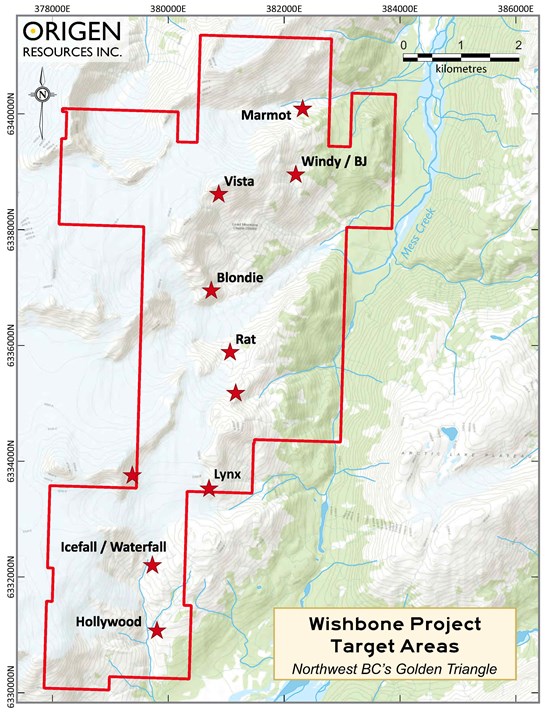 In conclusion, the exploration strategy for 2020 will be to re-establish and extend some of the key existing targets at Wishbone focusing on areas that have demonstrated strongly anomalous gold in soil values. Each area will be evaluated and prioritized for a subsequent program to advance the Wishbone Property.

To view the source version of this press release, please visit https://www.newsfilecorp.com/release/59824