Vancouver, British Columbia--(Newsfile Corp. - June 30, 2020) - Blue Star Gold Corp. (TSXV: BAU) (FSE: 5WP) (the "Company") announces that, based on its Exposure Control Plan and the Health & Safety Plan that was submitted to the Department of Health in Nunavut, the Chief Public Health Officer has confirmed that the Company can commence its work programs in early July on the Hood River and Ulu projects.

Exploration Program: The company plans to conduct a 7,000 m (approximately) drill program using 2 drill rigs. In addition to the known Flood, Gnu and NFN zones in the Robb Trend (see Appendix 1) on which approximately 4,500 m of drilling are planned, the Company plans to test new targets in the North and South Penthouse as well as Crown Zones in eastern Hood River. The Company also plans to test the Apex and Contact zones in the Robb Trend (see Appendix 2).

Reclamation of the recently acquired Ulu Gold Project includes characterization, segregation and staging of legacy mine waste, demolition waste and contaminated soil for approved on site treatment and disposal or backhaul for appropriate off-site disposal, where needed.

Peter Kuhn, Interim CEO & General Manager, remarks: "We would like to thank the Kitikmeot Inuit Association, the offices of the Chief Public Health Officers in both Nunavut and Northwest Territories, the Government of Nunavut Department of Economic Development and Transportation, the Government of the Northwest Territories Department of Industry, Tourism and Investment, Workers' Safety and Compensation Commission and the Northwest Territories and Nunavut Chamber of Mines for their collaboration and assistance in support of Blue Star's application to access our exploration properties in a timely and safe manner."

Blue Star is a Vancouver-based gold and silver company focused on exploration and development within Nunavut, Canada. The Company, through its subsidiary, Inukshuk Exploration Inc. ("Inukshuk"), owns the highly prospective 8,015 ha Hood River gold concessions located contiguous with the Ulu mining lease. Inukshuk acquired its interest in the Hood River property through a renewable, 20-year Mineral Exploration Agreement with Nunavut Tunngavik Incorporated ("NTI") which holds subsurface title to Inuit Owned Lands ("IOL"). The Hood River property located within the CO-20 IOL parcel is administered by the NTI through the HOODRIVER-001 MEA signed between Inukshuk and NTI dated June 01, 2013. Blue Star has recently acquired the Ulu Gold Property, an advanced gold and silver project and with regulatory approvals has completed the transmittal of the mining lease and assignment of the permits and licenses. Together with the Hood River concessions, Blue Star controls nearly 10,000 ha of prospective mineral claims within which the Company has identified more than 40 gold occurrences. 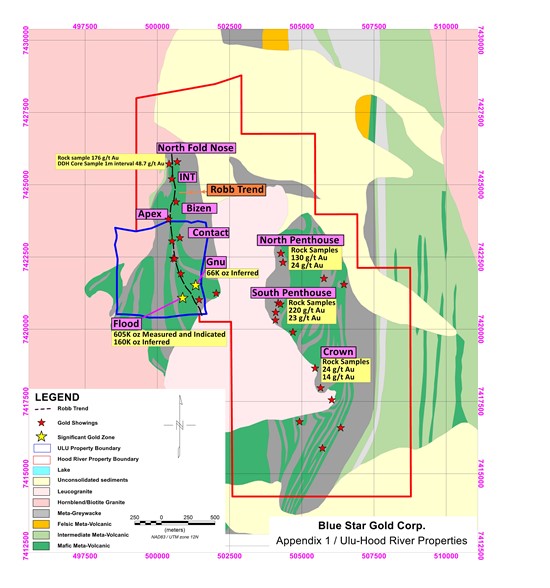 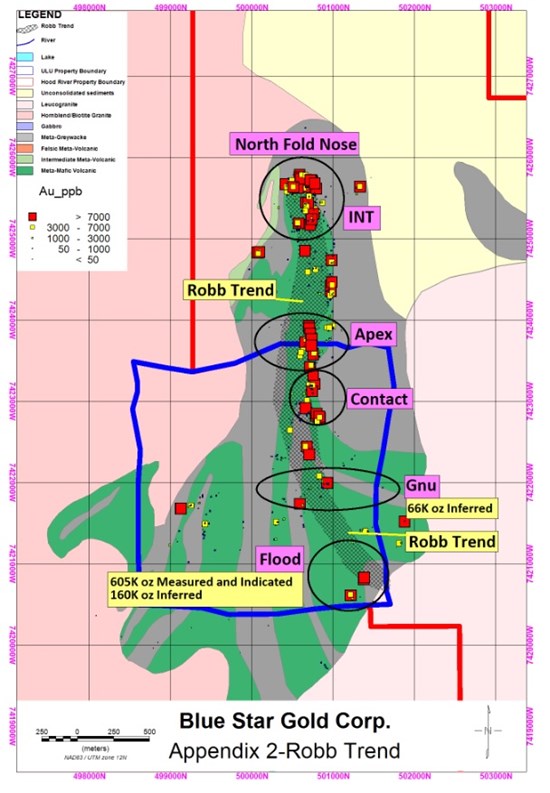 To view the source version of this press release, please visit https://www.newsfilecorp.com/release/58819

Sign up to receive news releases by email for Blue Star Gold Corp. or all companies belonging to the Mining/Metals industry.