Vancouver, British Columbia--(Newsfile Corp. - May 19, 2020) - Revelo Resources Corp. (TSXV: RVL) ("Revelo" or the "Company") is pleased to announce that it has signed a Binding Letter of Intent ("LOI") with West Pacific Ventures Corp. ("WPV"), a private Canadian company, that will allow WPV to acquire a 100% interest in eight of Revelo's copper-focused projects in northern Chile.

Under the terms of the LOI, Revelo will receive new shares of WPV that in turn will be exchanged for shares of a public company shell ("PubCo"). The transaction will result in a Reverse Take-Over ("RTO") of Pubco, with the resulting company seeking to concurrently list on the Canadian Securities Exchange ("CSE") after having raised a minimum of $4 million. Revelo will on closing of the RTO hold 19.9% of the issued and outstanding shares of PubCo.

Revelo's President and CEO, Tim Beale, commented: "This transaction represents an excellent opportunity for Revelo to participate in a new company that will be well financed and positioned to advance eight of our projects in Chile. Revelo will retain a significant say in the technical direction and evolution of the exploration programs. This meets Revelo's key criteria for striking deals on its projects, with the Company and its shareholders well positioned to participate in success and discovery."

Conditions precedent and other details of the transaction include:

The Arrieros, Block 2, Block 3, Block 4 and Redondo-Veronica projects all lie along the Mid-Tertiary aged magmatic belt of northern Chile often referred to as the Domeyko Cordillera or the West Fissure Belt. This mineral belt, stretching over some 600 kilometers north-south, is host to some of the most important porphyry copper mines and districts in the world, such as Collahuasi (Anglo American, Glencore and partners), Chuquicamata (Codelco), Centinela (Antofagasta Minerals, Marubeni and partners), La Escondida (BHP, Rio Tinto and partners) and El Salvador (Codelco), amongst others. The Domeyko Cordillera copper mines are responsible for producing around 15% of world copper production, and around 56% of Chilean copper production, and include the world's largest single copper mine at La Escondida.

All five of the Revelo projects to be sold are characterised by extensive post-mineral gravel and caliche covered basins, typically called "pampas", which obscure the underlying geology. Geophysics followed by drill testing are the main tools available for exploration.

The projects all lie directly along trend from major producing copper mines and have potential for concealing buried porphyry copper systems, as evidenced by peripheral hydrothermal alteration zones at each project exhibiting characteristics related to porphyry copper deposits. Two projects, Arrieros and Block 3, already have exploration magnetics data coverage that reveals a series of geophysical anomalies that could possibly be related to buried porphyry copper systems. Although limited historic drilling has been carried out on some of the projects, the drilling is generally wide-spaced or off-target based on existing data, and large areas with potential to conceal large porphyry systems remain untested. None of the projects currently has Induced Polarisation ("IP") coverage. It will be the intent of PubCo to fully explore the pampa basins with high resolution geophysical surveys, both magnetics and IP, in order to delineate potential drill targets for follow-up.

The Cerro Blanco, Cerro Buenos Aires and Morros Blancos projects all lie along the Early-Tertiary aged magmatic belt of northern Chile often referred to as the Central Belt or the Paleocene Belt. This mineral belt extends from at least southern Peru to central Chile - more than 1,500 kilometers - and is host to important porphyry copper deposits and mines such as Cerro Verde (Freeport and partners), Cuajone and Toquepala (Southern Copper), and Quellaveco (Anglo American and partners) in southern Peru, and Cerro Colorado and Spence (BHP and partners), Sierra Gorda (KGHM and partners), and further south Relincho (Teck and partners), in northern Chile. The segment of the belt between the latitudes of approximately Antofagasta and Copiapo in northern Chile, a distance of around 400 kilometers, is also characterised by historically important and currently producing gold and silver mines of both high-sulphidation and low-sulphidation type, such as the El Peñon-Fortuna district (Yamana Gold), Amancaya and Guanaco (Austral Gold), and the Inca de Oro district.

The three Revelo projects to be sold all occur within the central segment dominated by gold and silver deposits and mines and are located between El Peñon and Amancaya. The three projects are characterised by high-level, advanced argillic hydrothermal alteration zones commonly called "lithocaps", which typically occur above potential high-sulphidation and/or porphyry copper or copper-gold systems. Cerro Buenos Aires and Morros Blancos have extensive, zoned alteration zones with zoned geochemical patterns at surface, while Cerro Blanco is a relatively small outcrop (about 1 Km across) surrounded by extensive post-mineral gravel "pampas".

Magnetic geophysical coverage at both Cerro Buenos Aires and Cerro Blanco reveals several magnetic highs that might be related to porphyry copper centres. Minor drilling at all three projects, peripheral to the main targets as currently understood, supports the proposed porphyry copper model. It will be the intent of PubCo to add detail to the alteration and geochemical zonation patterns which, in conjunction with further geophysical surveys, should result in the delineation of drill targets for follow-up. The Cerro Blanco area requires IP coverage in order to understand better the magnetic features apparent through the extensive cover, with a view to delineating drill targets.

The reader is cautioned that the mention of existing deposits and mines is to give context to the various projects, but there is no evidence to date that a comparable mineral resource could be found on the Properties.

For further details of the projects please refer to the relevant project pages on Revelo's website (www.reveloresources.com).

Demetrius Pohl, PhD., Certified Professional Geoscientist (CPG), an independent geological consultant to Revelo, is the Company's Qualified Person for the purposes of National Instrument 43-101 Standards of Disclosures for Mineral Projects of the Canadian Securities Administrators and has verified the data disclosed and approved the written disclosure of the technical information contained in this news release.

Revelo is a Canadian company listed on the TSX Venture Exchange (TSXV: RVL). Revelo has interests in an outstanding portfolio of projects prospective for gold and copper located along proven mineral belts in one of the world's top mining jurisdictions - Chile. The Company has a vision to reward shareholders with wealth-generating mineral discoveries along Chile's prime mineral belts, through leveraged and more efficient capital deployment, exploration, discovery and monetization. For more information, please visit Revelo's website here www.reveloresources.com. 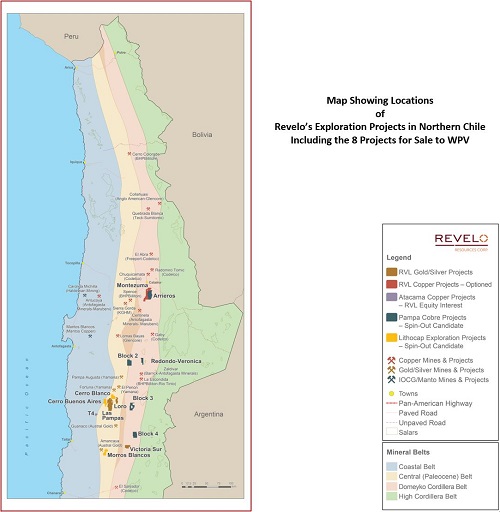 To view an enhanced version of this graphic, please visit:
https://orders.newsfilecorp.com/files/3761/56131_img.enh.jpg

To view the source version of this press release, please visit https://www.newsfilecorp.com/release/56131

Sign up to receive news releases by email for Revelo Resources Corp. or all companies belonging to the Mining and Metals, Precious Metals industries.