Riverside's President and CEO, John-Mark Staude, stated: "We are pleased with the progress and high-grade gold results above and around the former mining operations at Santa Rosalia and other target areas. We look forward to progressing this Project potentially with a joint-venture partner and are excited to be located in between two highly valued mining and development operations. The approved drill permit allows Riverside to take the next necessary steps at Los Cuarentas."

In addition to the assay results, the Company also completed permitting for drilling and obtained local access agreements with the surface ranch owners enabling the Project to move ahead in a positive way in the coming months. The recent sampling program included 31 new rock-chip samples and Riverside geologists took the opportunity to update and create a new geological map. The new assay results show continuity along the principal mineralized zones and included five high-grades gold samples (see Table 1 below). 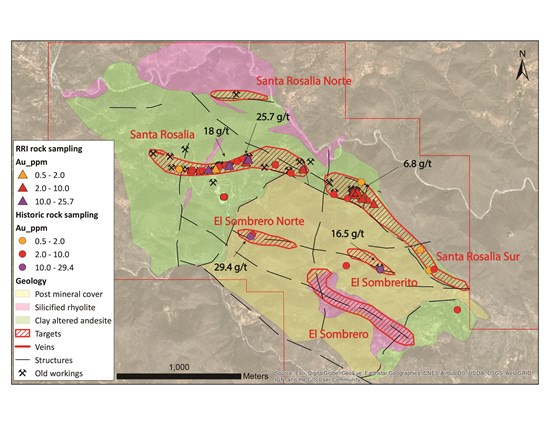 The Los Cuarentas Project area comprises multiple, gold-bearing quartz veins located within a larger structural corridor. Mineralization is primarily hosted in an andesitic volcanic sequence, which is overlain by post-mineral units (see Figures 1 and 2). Recent mapping by Riverside has also demonstrated the presence of post-mineral faulting resulting in the down dropping to the south. Within the down dropped mineralized block not as much erosion has occurred preserving the upper levels of the vein system. This is evident by the change in alteration minerals and style of gold occurrence (see Figure 2 below). The observation of down-dropping within the Project suggests that the system may host multiple additional preserved mineralized bodies similar to Santa Rosalia and Santa Rosalia Sur. 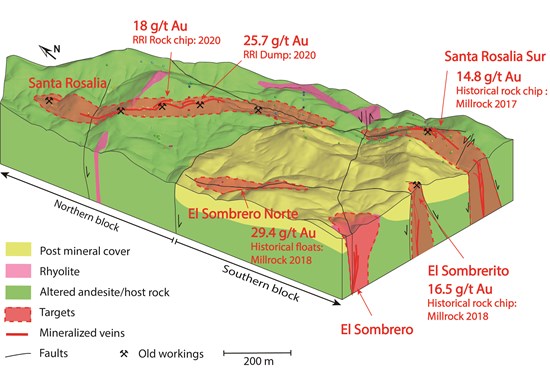 Santa Rosalia:
The Santa Rosalia target is a mineralized structural zone extending for approximately 1 km (see press release January 20, 2020) and part of the uplifted northern block. The Santa Rosalia "vein zone" is defined as multiple sub-parallel mineralized silica-infilled fractures which form veins. Those veins can be seen in structural zones which can be up to 8 m wide. The latest sampling program returned several high-grade samples that include: 18 g/t Au in a single 0.5 m wide vein, 2.3 g/t Au in quartz vein floats and 0.5 g/t Au along a 1 m channel sample across the entrance of an adit. Additional observations at Santa Rosalia show shallow, hydrothermal textures such as chalcedony quartz, suggesting most of the system has been preserved and likely extends to depth.

Santa Rosalia Sur:
Similar to the Santa Rosalia target, the Santa Rosalia Sur target is part of the uplifted northern block. The latest mapping and sampling program highlighted and confirmed the presence of high-grade gold up to 14.8 g/t Au in hydrothermal breccia that extends 200 meters along strike. Laterally, the stockwork bordering the hydrothermal breccia returned 3 g/t Au. As previously described in the press release of January 20, 2020, the mineralized zone is affected by post-mineral faulting to the north, west and south. Although the mineralized bedrock has been dropped-down to the south, the alteration and lower grade gold (1-3 g/t) mineralization can still be traced for an additional 800 meters to the south along trend.

El Sombrero:
El Sombrero target can be defined as a northwest oriented zone of hydrothermally altered package of volcanic rocks. High temperature alteration mineralogy as well as extensive silicification are primarily located along the El Sombrero structure and extend approximately 10 meters on each side of the fault (see Figure 2 above). This observation makes El Sombrero a priority for deeper testing as it is identified as a possible feeder structure.

El Sombrero Norte:
El Sombrero target is mostly covered by post-mineral andesite (see Figure 1 above), windows in the andesite show hydrothermal alteration as well as silicified rhyolite dikes indicating that historical samples were taken along a structural feature. This structure is defined as a parallel splay of the Mine fault, which is the main host for the Santa Rosalia high-grade mineralization. Historical samples from Millrock's 2017 sampling program returned the highest grade on the property 29.4 g/t Au and another 8.6 g/t Au.

El Sombrerito:
El Sombrerito is a new discovery that includes some old workings. Historical samples taken by Millrock in 2018 returned 16.5 g/t Au and 11 g/t Au from 0.5 m wide stacked veinlets (see Figure 1 above). Riverside's geologists defined the area as a new structural target, which maybe a parallel splay in between Santa Rosalia Sur and El Sombrero.

Santa Rosalia Norte:
Approximately 450 meters to the north of Santa Rosalia additional old workings were discovered. Outcrops show steam-heated alteration mineralogy and the presence of silicified rhyolitic dikes. This area warrants more work to expand the size of the identified mineralized zone. Multiple parallel splays are likely to be found in this system, as was found at the nearby Las Chispas mine owned by SilverCrest Metals. Following their acquisition of the project SilverCrest discovered 14 additional veins, including the notable Babicanora Norte Vein, across a 1.5 km wide zone1.

Qualified Person and QA/QC:
The scientific and technical data contained in this news release pertaining to the Los Cuarentas Project was reviewed and/or prepared under the supervision of Freeman Smith, P.Geo., a non-independent qualified person to Riverside Resources Inc. who is responsible for ensuring that the geologic information provided in this news release is accurate and who acts as a "qualified person" under National Instrument 43-101 Standards of Disclosure for Mineral Projects.

Rock samples collected were taken to the Bureau Veritas Laboratories in Hermosillo, Mexico and analyzed using fire assaying for gold. The rejects remained with Bureau Veritas in Mexico while the pulps were transported to Bureau Veritas' laboratory in Vancouver, BC, Canada and analyzed using a 45 element ICP/ES-MS analysis. A QA/QC program was implemented as part of the sampling procedures for the exploration program which included blanks which were inserted randomly into the sample stream by Riverside.

About Riverside Resources Inc.:
Riverside is a well-funded exploration company driven by value generation and discovery. The Company has no debt and approximately 63M shares outstanding with a strong portfolio of gold-silver and copper assets in North America. Riverside has extensive experience and knowledge operating in Mexico and Canada and leverages its large database to generate a portfolio of prospective mineral properties. In addition to Riverside's own exploration spending, the Company also strives to diversify risk by securing joint-venture and spin-out partnerships to advance multiple assets simultaneously and create more chances for discovery. Riverside has additional properties available for option, with more information available on the Company's website at www.rivres.com.

To view the source version of this press release, please visit https://www.newsfilecorp.com/release/54651