Calgary, Alberta--(Newsfile Corp. - April 8, 2020) - Crestview Exploration Inc. (CSE: CRS) (FSE: CE7) ("Crestview" or "the Company") is pleased to announce it has acquired a geophysical use licence with Edcon-PRJ, Inc. of Lakewood, Colorado for aeromagnetic data. The subject data consists of high-quality data collected by Edcon-PRJ, Inc. over a 155 square kilometre area centered on the Rock Creek property, which covers 1525 acres (617 Ha).

Rock Creek hosts two parallel north-south gold mineralized vein-breccia structures which run the length of the property. On the surface these structures are hosted by volcanic flows and tuffs. Historic drill data for the project shows the early drilling encountered gold mineralized Paleozoic silty carbonate rocks at depth and proximal to the structures. These sedimentary rocks share many of the characteristics of the favourable gold host rocks found on the Carlin Trend; specifically, those at the Meikle mine located approximately 20 miles (32 km) to the south.

The company believes these deep reaching structures acted as a plumbing system to allow gold mineralizing fluids into the favourable host rocks as found by the shallow early drilling on the project. None of these early holes tested the favourable rocks below a depth of 500 ft. (152 meters) as most of the holes were terminated much sooner. Where these Paleozoic rocks are proximal to the structures represent excellent drill targets. 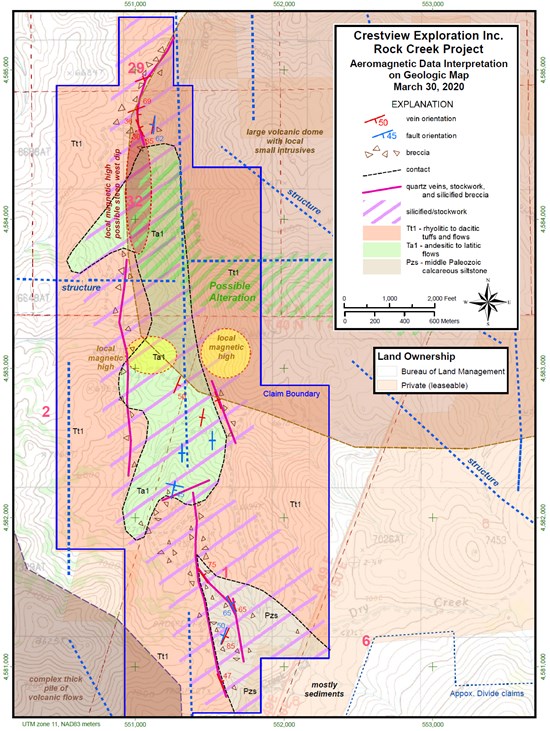 The company engaged the services of Frank P. Fritz of Fritz Geophysics to complete an interpretation of the data. The company supplied current geological mapping, related data and reviewed what is known about the project area and the location of current exploration targets to aid in the interpretation.

The interpretation indicates the area is dominated by north-south structures throughout the project. In addition, locally, the many volcanic flows and volcanic ashfalls appear to have a north-northeast trend, which is consistent with the company's mapping data.

Interpretation of the magnetic data reinforces the two northerly structures that contain mineralized veins and breccias geologically mapped on the claims. The company hypothesizes additional mineralized vein and vein breccias could be found along these other north-south structures on the property as interpreted from the geophysics. An important target has also been identified where one of the interpreted northerly structures cuts across the west edge of a large volcanic dome interpreted to lie in the east-central part of the claims. The area where this particular structure intersects the flank of the interpreted volcanic dome is also occupied by a strong northerly trending magnetic high which may reflect deeper mineralized sources. Structures along the flanks of volcanic domes are favourable for localizing precious metal mineralization.

Further, an interpreted north-south trending granitic dike extends from a large interpreted granitic body located just south of the claim block, northerly to the south edge of the interpreted dome described above. This large dike appears to occupy one of the more prominent interpreted north-south structures further confirming the veracity of the structural preparation. In other locations near and within the project area, these types of dikes can be mineralized.

The company considers these above described north-south trending structures and dikes, along with the strong magnetic high on the flank of the dome as priority targets and is currently evaluating methods to further explore them prior to drilling. 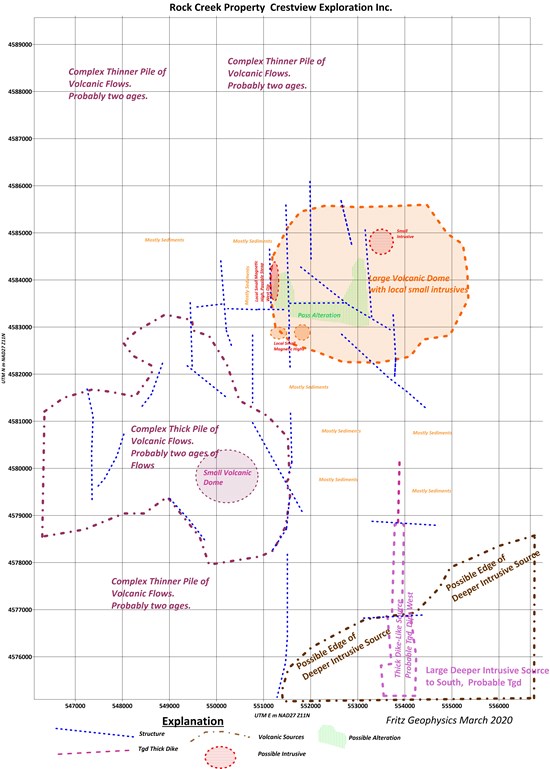 North-south structures play a significant role on the Carlin Trend as many of the deposits on the trend lie along a north-south structural corridor which begins in the Bootstrap-Capstone deposit area and extends to the Ren deposit. This same or closely related structural zone likely extends north from Ren north through the Falcon mine, which is located about four miles south of the project.

M. J. Abrams, Crestview's vice-president exploration commented "The project lies in the southwest part of the Red Cow aka Big Cottonwood Canyon caldera within an area of closely spaced or nested Eocene age calderas; and has a complex volcanic and intrusive geological history. More work is planned to fully understand the geology and its relationship to the mineralization on the property. The complexity of the geology bodes well for the exploration potential on the project in that each of the geological events could have positively impacted the amount of mineralization introduced to the property."

This News Release was prepared by M.J. Abrams; BS and MS Geology, CPG #11451; Idaho PG #570. M.J. Abrams is a Qualified Person as defined by NI 43-101 and has reviewed the scientific and technical disclosure included in this news release.

About Crestview Exploration Inc:
The Rock Creek Project is a volcanic and sediment-hosted, epithermal precious metal property, which is adjacent to mines with historical production, situated in the Tuscarora Mountains of northern Elko County, Nevada. Together the property comprises 74 unpatented lode mining claims. The Tuscarora Mountains host the northern end of Carlin-trend mineralization, a cluster of major, large gold deposits.

Forward-Looking Information
This news release includes certain information that may be deemed "forward-looking information" under applicable securities laws. All statements in this release, other than statements of historical facts, that address acquisition of the Property and future work thereon, mineral resource and reserve potential, exploration activities and events or developments that the Company expects is forward-looking information. Although the Company believes the expectations expressed in such statements are based on reasonable assumptions, such statements are not guarantees of future performance and actual results or developments may differ materially from those in the statements. There are certain factors that could cause actual results to differ materially from those in the forward-looking information. These include the results of the Company's due diligence investigations, market prices, exploration successes, continued availability of capital and financing, and general economic, market or business conditions.

Investors are cautioned that any such statements are not guarantees of future performance and actual results or developments may differ materially from those projected in the forward-looking information. For more information on the Company, investors are encouraged to review the Company's public filings at www.sedar.com. The Company disclaims any intention or obligation to update or revise any forward- looking information, whether as a result of new information, future events or otherwise, other than as required by law.

To view the source version of this press release, please visit https://www.newsfilecorp.com/release/54283

Sign up to receive news releases by email for Crestview Exploration Inc. or all companies belonging to the Precious Metals, Mining and Metals industries.