The purpose of the testing has been to customize the AffinityTM System to the production of cannabidiol ("CBD") distillate, free from all detectable THC content ("T-Free Distillate") while retaining all of the other valuable cannabinoids. The objective is an important one for CBD processors, since chromatography, the legacy technology for removing THC is widely considered to have significant issues regarding capital and operating costs, efficiency, and scalability.

On December 20, 2018, the United States Agricultural Improvement Act of 2018 (the "2018 Farm Bill") established that cannabis plants and derivatives containing less than 0.3% THC would no longer be controlled substances under United States federal law and allows for federally-sanctioned hemp production under the purview of the United States Department of Agriculture (the "USDA"), in coordination with state departments of agriculture that elect to have primary regulatory authority. Products which meet the acceptable percentage of THC are considered to be compliant ("T-Compliant"). Products which have below "non-detectable" amounts of THC are considered to be T-free ("T-Free"). The testing team has been tailoring the AffinityTM unit to the production of T-Free as well as T-Compliant CBD distillate. 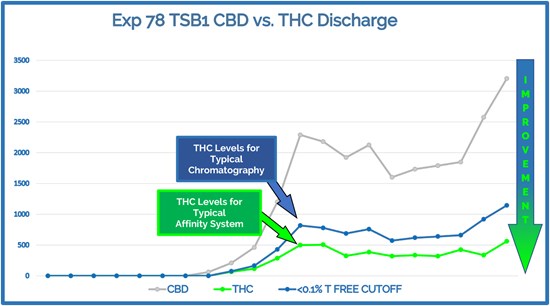 The forgoing graph displays indicative results of the in-house testing and provides a comparative analysis of the AffinityTM System remediation capabilities when compared directly to distillate that was remediated using traditional chromatography. The CBD distillate generated by the AffinityTM System contained roughly half the amount of undesirable THC relative to that which was produced by chromatography.

"These results showcase the superior selectivity and extractive capabilities of the AffinityTM System versus chromatography," said Dr. Jonathan Gluckman, President and CEO of Sixth Wave. "I'm very excited and proud of the Sixth Wave team and their ability to rapidly pivot to meet the changing demands of the cannabis/hemp industry. As we know, a major challenge for the cannabinoid purification industry will be the delivery of customization and flexibility, with medicinal and recreational applications demanding exceptional product diversity. The AffinityTM System is highly capable in this regard, with the potential to tailor extraction media to recover any one of the hundreds of cannabinoids available to us. Our current accomplishment in delivering a T-Free distillate at an industrial scale is important, but is only scratching the surface of our capabilities in the cannabis sector."

The AffinityTM pilot project is the culmination of a collaboration between Sixth Wave and numerous test partners encompassing an extensive range of specialties including polymer bead design, bead production scale-up, machine design, and cannabinoid extraction. The team notably includes; Don Riley, Affinity Farms; Aris Kalivretenos, Aurora Analytics; Billy Chavis, Paragon Processing LLC and Earl Ross, Natural Ascent Consulting. The resulting work has been useful in optimizing the performance of the AffinityTM System and is breaking new ground in the materials detection and extraction nanotechnology sector. The AffinityTM development process has comprised over 85 experiments to date with more than 30 data elements analyzed per experiment. The resultant 2,550 data elements have furnished a broad sample set for the determination of operating parameters for optimized system performance.

Sixth Wave is now incorporating these variables into the design of AffinityTM production units. Fluid dynamics are a key component of the unit design. Work has involved the careful analysis of fluid dispersion, homogenization, and backpressure as it relates to AffinityTM bead particle size and type, all of which affect the performance of the system. Varying ethanol/water mixtures, distillate dilution ratios, flow rates, and fluid volumes are being incorporated into the current set of standard operating parameters ("SOP").

Based on these results, the Company is now progressing to Production Scale operations. The decision to accelerate production followed a series of successful bead formulations, each one unlocking the pathway to the next generation Molecular Imprinted Polymer ("MIP") design and quantitative improvements in THC remediation. The Company is in the process of collecting and analyzing the performance data essential for refining the design and starting the full-scale production process of the AffinityTM systems.

Comparative results between AffinityTM and chromatography show AffinityTM exceeding chromatography performance in terms of product retention and yield, as well as significant savings in both capital and operating costs. While the main focus of the test work has been on THC remediation, Sixth Wave has already demonstrated that the AffinityTM System can be used as a direct cannabinoid isolation and purification technology and may eliminate distillation when processing both raw crude extracts and refined distillates.

The foregoing factors are particularly important for cannabis processors focused on the vape and edibles markets. In such cases, the creation of a mixed cannabinoid isolate is an intermediate step to making products reliably dosed and easily adsorbed by the body. In turn, the ability to take crude extracts, separate the major lipids with precipitation and filtration, rather than full winterization, and process these directly with the AffinityTM System provides a major advantage in terms of THC and CBD content yield, as well as prospective savings to the operator in terms of up front equipment costs and ongoing operating costs.

In addition to the foregoing, laboratory work with extracts containing heavy metals indicate that the AffinityTM System may isolate and remove the cannabinoids without carrying forward the metal contaminants. Testing of the ability to remove pesticide contaminants is also underway. As a result of these tests, the Company has begun negotiations with several cannabis producers for pre-production deployment of AffinityTM Systems.

"Plant genetics are being manipulated successfully to increase the production of target cannabinoids at the exclusion of others," commented Dr. Gluckman, "Our ability to stay ahead of the genetics in the ability to maximize the extraction and isolation of these cannabinoids will be a key to success. As demonstrated by our successes to date, we are confident that we will continue to offer our customers cutting edge nanotechnology solutions to meet these changes and maintain their competitive advantages".

The Company further reports on the addition of Natural Ascent Consulting ("NAC") to its development team. Co-owned by Kameron Walker and Earl Ross, NAC brings over 5 years of hemp and cannabis specific industry experience to the AffinityTM team.

Kameron Walker is a widely known expert in industrial-scale extraction and purification for both hemp and cannabis. His cannabinoid processing industry contact network is extensive, comprising all major equipment manufacturers and service companies. Kameron has aided in the early-stage and advanced development of a wide range of technologies including centrifuges, chilling systems, solvent recovery, distillation, and others.

Earl Ross is classically trained as a chemical engineer, graduating from The Pennsylvania State University in 2010. From analytical chemistry in a lab setting, to data acquisition as a field engineer in the oilfields, and finally breaking out and consulting on extraction and analytical chemistry in the hemp and cannabis industry, Earl has a multitude of industry experiences to draw upon to find solutions to emerging challenges now facing the rapidly growing hemp and cannabis industries.

Sixth Wave is a development stage nanotechnology company focused on extraction and detection of target substances at the molecular level using its patented technologies in the highly specialized field of molecularly imprinted polymers. Sixth Wave is in the process of commercializing IXOS®, a line of extraction polymers for the gold mining industry, and together with the Company, it has developed extraction polymers for the extraction of CBD, THC and other cannabinoids from cannabis extracts under the name AffinityTM.

For more information about Sixth Wave, please visit our web site at: www.sixthwave.com

To view the source version of this press release, please visit https://www.newsfilecorp.com/release/52592

Sign up to receive news releases by email for Sixth Wave Innovations Inc. or all companies belonging to the Chemical, Precious Metals, Cannabis, Technology industries.