Vancouver, British Columbia--(Newsfile Corp. - January 30, 2020) - Thunderstruck Resources Ltd. (TSXV: AWE) (OTC: THURF) (The "Company") is pleased to report significant assay results for the remaining diamond drill holes completed during 2019 on its Korokayiu Joint Venture zinc-copper VMS prospect. Based on the strength of these and previously reported 2019 drill results, together with other recent results from the project, the JV has applied to increase the tenement holdings by over 350%. Arrangements are underway to begin the next phase of drilling, which will be focused on scouting holes and completely funded by the JV partner.

Bryce Bradley, Thunderstruck's President/CEO, stated "Zinc grades have increased 2.5 times for two of our modern diamond drill holes versus the historically reported Anglo drill intercepts. Our current drilling program has also shown a sizable increase in copper, gold and silver grades relative to historical data. We are now in the process of securing a rig capable of testing these showings further down dip as well as continuing to test them laterally. This next phase of scouting holes will help to give size and direction beyond the historical discovery. And since the Korokayiu program is fully funded, it gives Thunderstruck the opportunity to advance its efforts on our other three 100%-owned projects in Fiji." 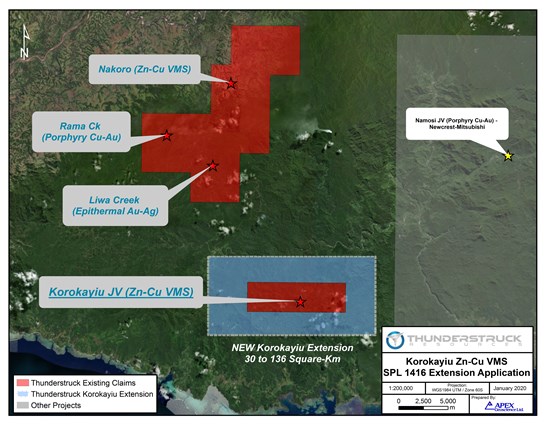 The Korokayiu tenement features approximately 15 kilometres of prospective geologic strike length, including eight additional, underexplored zinc-copper VMS prospects (see Thunderstruck News Release August 19, 2019). The results of 2019 geologic mapping and prospect assessment indicate that the geologic horizon and volcanic stratigraphy hosting the Korokayiu VMS mineralization and other high-priority prospects may extend outside the current landholdings. VMS deposits worldwide commonly occur in clusters within districts, with one or two large deposits and many smaller deposits/prospects.1 The move to expand the Korokayiu landholdings will allow the JV to capitalize on the potential for additional VMS discoveries.

The exploration program on Korokayiu is funded by Japan Oil, Gas and Metals National Corporation (JOGMEC), a Japanese agency funded by the national government with the intent of discovering large-scale mineral deposits that will benefit Japanese industry.

The WLK17 intercept is significant in that it represents the highest-grade drill intercept to date, current or historically reported, from Korokayiu. WLK17 was in part designed to twin historic hole WLK4, drilled by Anglo over 40 years ago, which returned assays of 5.5% Zn and 2.3% Cu over a drill core interval of 10 metres.2,3 The fact that WLK17 returned a zinc grade 2.5 times that of WLK4 underscores the importance of modern verification drilling at Korokayiu and its potential to add value to the project. 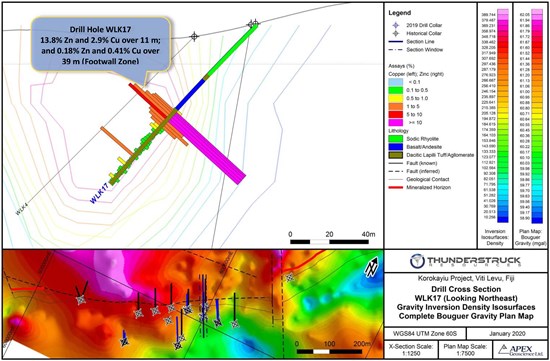 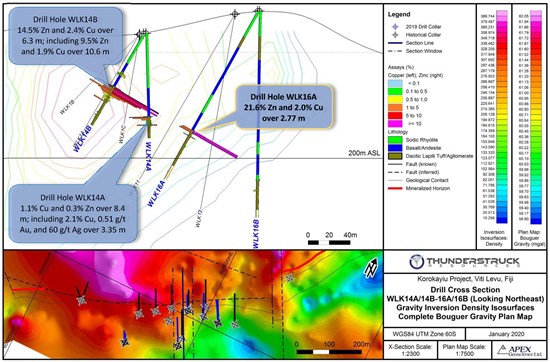 The Company announces that it has granted an aggregate of 1,100,000 options to various directors and consultants, with each option being exercisable into one common share at a price of $0.075 per share for a period of 10 years.

Viti Levu, the main island of Fiji, has a long mining history. It is on the prolific Pacific Ring of Fire, a trend that has produced numerous large deposits, including Porgera, Lihir and Grasberg. The island of Viti Levu hosts Namosi, held by a joint venture between Newcrest and Mitsubishi. Newcrest published Proven and Probable Reserves for Namosi of 1.3 billion tonnes at 0.37% Cu and 0.12 g/t Au (5.2M ounces Au and 4.9M tonnes Cu). Namosi is now undergoing environmental assessment as part of the permitting process. Lion One Metals is now developing its Tuvatu Project, with Indicated Resources of 1.1 million tonnes at 8.17 g/t Au (294,000 ounces Au), and Inferred Resources of 1.3 million tonnes at 10.6 g/t Au (445,000 ounces Au). The Vatukoula Gold Mine has been operating for 80 years, producing in excess of 7 million ounces.

JOGMEC (Japan Oil, Gas and Metals National Corporation) seeks to ensure a stable supply of metal resources that are indispensable for their industries, and contributes to a wide range of fields including surveying, exploration, financial support for Japanese companies and stockpiling, to recycling and environmental protection.

Thunderstruck Resources is a Canadian mineral exploration company that has assembled extensive and highly prospective properties in Fiji on which recent and previous exploration has confirmed zinc, copper and precious metals mineralization. The Company provides investors with exposure to a diverse portfolio of exploration stage projects with potential for zinc, copper, gold and silver in a politically safe and stable jurisdiction. Thunderstruck trades on the Toronto Venture Exchange (TSX-V) under the symbol "AWE" and United States OTC under the symbol "THURF."

The analytical work reported on herein was performed by Australian Laboratory Services Pty. Ltd. (ALS) at Perth, WA. ALS is an ISO-IEC 17025:2017 and ISO 9001:2015 accredited geoanalytical laboratory and is independent of the Thunderstruck Resources and the QP. Drill core samples were subject to crushing at a minimum of 70% passing 2 mm, followed by pulverizing of a 250 gram split to 85% passing 75 microns (PREP-31). A 0.25 gram sample pulp was then subject to 4-acid (HF-HNO3-HClO4) digestion and analysis via 33 element ICP-AES analysis (ME-ICP61) for base metals and silver, and 30 gram fire assay fusion (Au-AA25) for gold determination. Base metal over limit values returning greater than 1%, or greater than 100 g/t for silver, were analyzed by four-acid digestion of a 0.40 gram sample pulp, followed analysis via ICP-AES (ME-OG62).

Kristopher J. Raffle, P.Geo. (BC) Principal and Consultant of APEX Geoscience Ltd. of Edmonton, AB, is a qualified person for the project as defined by National Instrument NI 43-101. Mr. Raffle has reviewed and approved the portion of the technical content of this news release as it relates to Korokayiu VMS prospect.

To view the source version of this press release, please visit https://www.newsfilecorp.com/release/51954

Sign up to receive news releases by email for Thunderstruck Resources Ltd. or all companies belonging to the Mining and Metals, Precious Metals industries.