High concentrations of gallium oxide were identified in the 2017 Alces Lake prospecting lithogeochemical results. An average of 138.75 ppm (0.014 wt%) and maximum of 348.15 ppm (0.035 wt%) Ga2O3 was calculated from 23 samples (n=23) after applying a cut-off of 4.0 wt% Total Rare Earth Oxide ("TREO") to the full suite of sample results (n=53) (see Table 1). Gallium is one of the few elements besides uranium, thorium, lead, scandium and phosphorus that exhibits a similar positive linear correlation with total rare earth oxides, suggesting not only that gallium is part of the mineralization system but could be directly related to monazite (i.e., the higher the concentration of TREO, the higher the concentration of gallium).

Ten samples with a variety of TREO grades from the 2018 Alces Lake exploration program were sent to ACT Labs in Ancaster, Ontario, for inter-lab quality assurance element grade checks. ACT Labs confirmed high concentrations of gallium, but the ACT Labs results returned much higher values than those from the 2017 samples simply due to the different analytical digestion techniques used.

Gallium is one of several elements deemed "critical" by the United States Government (i.e., restricted supply by China, Kazakhstan and Ukraine, and in high-demand) that is used in numerous modern technological applications, in wireless communications such as 5G, cell phones, laser diodes, semiconductors, solar energy magnetic materials, and military defense. A significant potential exists for bottlenecks in the gallium supply chain because of rapid growth in areas of green/clean energy technologies.

As much as 90% of primary global gallium supply is a by-product of processing of bauxite (alumina ore) with lesser amounts derived from sphalerite (ZnS) production. It takes multiple cycles of bauxite processing before the gallium content reaches its production starting concentration point of approximately 100 - 125 ppm Ga2O3.

Production of gallium is therefore limited by global factors and economics that influence the production of the principal mineral commodities (i.e., aluminum or zinc).

Much like rare earth elements ("REE"), gallium is widely dispersed in nature but rarely found in economically extractable quantities. For example, the Apex mine, southwestern Utah, USA, was the only primary mined source of gallium (and germanium) until its closure in 2011 by Teck Resources Limited. The mine operated intermittently over 100 years since 1884. A historic estimate for the average concentration of gallium was 0.032 wt%, with locally occurring grades up to 0.148 wt% gallium.

Mr. James Sykes, Appia's Vice-President, Exploration and Development, comments: "The naturally occurring high-concentrations of gallium associated with REEs emphasizes the potential value that exists at Alces Lake. The Alces Lake mineralization system is endowed with critical metals that are needed for emerging commercial technological and military defense applications. We observe naturally occurring gallium concentrations that are much higher than those occurring as concentrated by-products from bauxite and sphalerite ores. The grades we have observed are comparable to those of the Apex mine, the only primary mined source of gallium. The gallium extracted during the REE processing stage represents another potential revenue stream for Alces Lake."

Appia will continue its gallium studies in the coming weeks/months, starting with re-analysing of high-grade REO samples for the presence of gallium. Positive analytical numbers could result in an advanced study by a Master's student from the University of Saskatchewan to determine the presence/economic potential of recovering gallium at Alces Lake.

The 2017 assay results were provided by Saskatchewan Research Council's ("SRC") Geoanalytical Laboratory, an ISO/IEC 17025:2005 (CAN-P-4E) certified laboratory in Saskatoon, SK, for multi-element and REE analysis. The multi-element analysis, which includes gallium, uses a tri-acid (HF:HNO3:HClO4) total digestion technique to dissolve most elements, with the exception of refractory minerals, such as monazite. Since monazite was not fully dissolved, the gallium values are under-represented using this methodology. The REE analysis uses a lithium metaborate fusion to dissolve refractory minerals, such as monazite, but gallium was not reported with this method. The 2018 assay results were provided by ACT Labs, an ISO 17025 accredited laboratory in Ancaster, ON, for multi-element and REE analysis. Both multi-element and REE analysis used a lithium borate fusion to dissolve refractory minerals, including both gallium and REEs using the same digestion method, and shows a better correlation of gallium to REO.

All analytical results reported herein have passed rigorous internal QA/QC review and compilation. The technical content in this news release was reviewed and approved by Dr. Irvine R. Annesley, P.Geo, Advisor to Appia's Board of Directors, and a Qualified Person as defined by National Instrument 43-101.

The Company also has a 100% interest (subject to a 1% Uranium Production Payment Royalty and a 1% Net Smelter Return Royalty on any precious or base metals payable, provided that the price of uranium is greater than US$130 per pound) in 12,545 hectares (31,000 acres), with rare earth element and uranium deposits over five mineralized zones in the Elliot Lake Camp, Ontario. The Camp historically produced over 300 million pounds of U3O8 and is the only Canadian camp that has had significant rare earth element (yttrium) production. The deposits are largely unconstrained along strike and down dip. 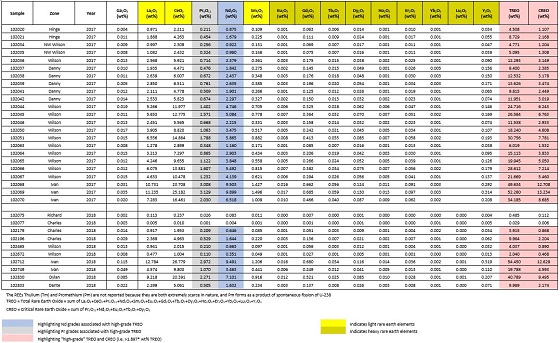 To view an enhanced version of Table 1, please visit:
https://orders.newsfilecorp.com/files/5416/51774_appia_orig.JPG

To view the source version of this press release, please visit https://www.newsfilecorp.com/release/51774