This first phase of drilling completed by Rio Tinto Exploration Canada (RTEC) has successfully confirmed and extended copper mineralization at the Jansem and Janice targets. Forum and RTEC's technical teams are reviewing the drill data and a more thorough analysis and interpretation of results are forthcoming.

Rick Mazur, President & CEO commented, "Drilling by Rio Tinto intersected thick zones of flat lying, stratabound chalcocite and native copper mineralization with good continuity and near-surface grades. Deeper drilling has demonstrated that multiple horizons of copper mineralization are present. We are gaining confidence that Janice Lake is a strongly mineralized system, as new data generated by this program helps us to understand the full potential of this 52km long sedimentary copper basin."

Drilling intersected several layers of copper mineralization, starting from 11 metres to a maximum downhole depth of 220 metres. Estimated true thickness varies from several metres to more than 60m. Drill holes were orientated to crosscut the stratigraphy as close as possible at right angles, as the copper is interpreted to be mostly stratabound.

*Drill holes were oriented to crosscut the stratigraphy, however, true widths of the reported mineralized intervals have not yet been determined,

Drilling intersected several layers of Cu mineralization, starting from 8 metres to a maximum downhole depth of 358 metres. Estimated true thickness varies from several metres to more than 50m. Drill holes were orientated to crosscut the stratigraphy as close as possible at right angles, as the copper is interpreted to be mostly stratabound.

* Drill holes were oriented to crosscut the stratigraphy, however, true widths of the reported mineralized intervals have not yet been determined.

Noranda discovered a series of copper-bearing boulders in the KAZ area and followed-up with drill hole PL93-5, which intersected 0.32% copper over 15 metres. The 2019 holes drilled by RTEC were located approximately 400 to 500m to the south of the original showing, and the lower mineralized unit is interpreted to have been faulted away along this section. Further drilling on this showing will have to be located closer to the original holes to understand its control and orientation.

* Drill holes were oriented to crosscut the stratigraphy, however, true widths of the reported mineralized intervals have not yet been determined.

A complete set of drill results and a plan map have been posted to the Home Page of Forum's website at https://forumenergymetals.com/ All drill core samples were sent to ALS Global in Vancouver, BC for assay. Ken Wheatley, P.Geo. and Forum's VP, Exploration and Qualified Person under National Instrument 43-101, has reviewed and approved the contents of this news release. 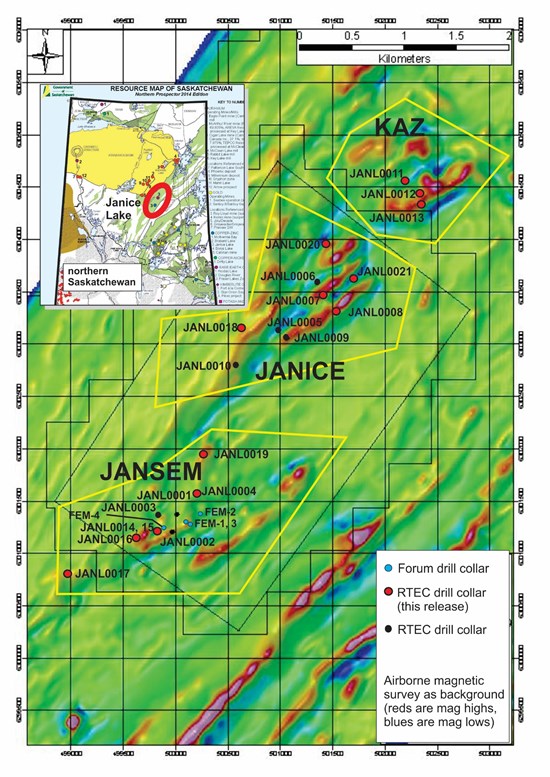 RTEC completed a 4,318 line kilometre high resolution airborne magnetic survey over the entire 52 km length of the property and drilled 21 holes totalling 5,209 metres this summer under an Option Agreement to earn an 80% interest in the Janice Lake project by spending $30 million in exploration. Nine holes have been completed on the Jansem target, nine on the Janice target and three on the Kaz target.

To view the source version of this press release, please visit https://www.newsfilecorp.com/release/50294