Sudbury, Ontario--(Newsfile Corp. - November 19, 2019) - Transition Metals Corp (TSXV: XTM) ("Transition", "the Company") is pleased to report that encouraging assay results are continuing to be received from diamond drilling completed on the Janice Lake property by Rio Tinto Exploration Canada Inc. ("RTEC"). To date, assay results from 9 of a total of 21 holes completed by RTEC have been reported for 2 of more than 20 target areas consisting of outcropping zones of copper-bearing mineralization highlighted by exploration work completed to date on the property. Results include 18.0 metres grading 0.71% Cu, 4.2 g/t Ag in hole JANL0002 from the Jansem target area and 57.1 metres grading 0.41% Cu, 4.2 g/t Ag including 13.0 metres grading 0.95% Cu, 9.7 g/t Ag from the Janice target area. Results from drilling at both target areas are discussed more fully below. Forum Energy Metals Corp ("Forum") currently holds an option to earn a 100% interest in the property from the Company and has optioned a portion of its potential interest in the property to RTEC. The Company retains excellent exposure to this project benefitting from exploration expenditures on the property, the issuance of Forum shares, receipt of cash payments and retention of a Net Smelter Return royalty, described more fully below.

- This new drilling has defined a continuously mineralized, flat-lying zone of near surface copper mineralization that is now a minimum of 400 metres in strike length, 130 metres in width, with an estimated true thickness varying from several metres to more than 55 metres.

- The Janice target is located approximately 2.5 kilometres northeast from the Jansem target area

- Drilling to date outlines a near surface mineralized zone now a minimum of 600 metres in strike length, and 200 metres in width at surface, and has an estimated true thickness varying from several metres to more than 55 metres, present in several stratigraphic layers.

All drill core samples have been sent to ALS Global in Vancouver, BC for assay. Ken Wheatley, P.Geo. and Forum's VP, Exploration and Qualified Person under National Instrument 43-101, has reviewed and approved the contents of this news release. Please refer to Forum releases dated October 1, October 9, October 31 and November 14, 2019 for additional information www.forumenergymetals.com.

Quality Control/ Quality Assurance
Core samples were sawed in half, keeping the half with the reference line for orientated core in the box. Samples averaged 2 metres in length through the mineralized zone, 4 metres in length in the unmineralized zone, however these lengths varied depending on stratigraphy, alteration or mineralization. Standards were introduced after every 20th sample, using a high grade, low grade or unmineralized, depending on the surrounding core. Duplicates were also introduced on every 20th sample, quartering the core. Blanks were used for the first sample of the hole and at the beginning and end of a mineralized interval, using certified rose quartz. The first two holes of this drill program had blank material inserted after every sample that had visual chalcocite and native copper to determine the potential smear effect. This would allow to modifications in the sample preparation for future holes in this program. A 4-acid digestion was used on the samples at ALS lab in Vancouver, followed by analysis by ICP-MS (the ME-MS61L package). Higher grade samples will be run again through copper screen using the coarse reject material. 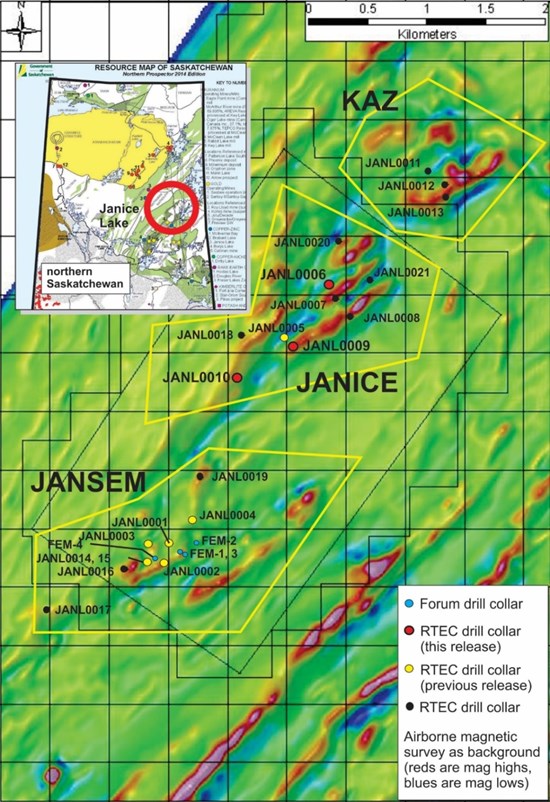 
Janice Lake Summer Exploration Program Summary
In May 2019, Forum entered into a $30 million option agreement with Rio Tinto Exploration Canada Inc. ("RTEC"). RTEC has since completed a 4,318 line kilometre high resolution airborne magnetic survey over the entire 52 km length of the property and drilled 21 holes totalling 5,209 metres this summer. Nine holes have been completed on the Jansem target, nine on the Janice target and three on the Kaz target (Figure 1). Results from 9 holes on the Janice and Jansem have been reported to date. The remaining 12 holes from three target areas will be reported once received from RTEC.

About the Transition Agreement with Forum
Janice Lake, currently under option from the Company to Forum, is located approximately 55 km southeast of Key Lake Saskatchewan. In May 2019, Transition was advised that RTEC had signed an Option Agreement with Forum to earn an interest in Janice Lake Property (see Transition news release dated May 9, 2019). Forum holds an option to earn 100% interest in the Janice Lake project by providing Transition with 8,000,000 common shares of Forum (issued), completing $250,000 in expenditures over 6 months (completed), and issuing cash option payments totaling $250,000 ($50,000 completed) over 48 months. Once Forum's 100% interest is vested, Transition will retain a 2.0% Net Smelter Return royalty (NSR) of which 0.75% NSR can be purchased for $1.5 million. In addition, Transition is entitled to receive a $1,000,000 cash payment upon the completion of a Feasibility Study and a milestone $5,000,000 cash payment within 12 months of achieving Commercial Production. (See Transition news release of February 6, 2018).

Under the terms of the Forum - RTEC agreement, RTEC will commit to spending $3 million within 18 months on the Property with the option to vest a 51% interest by spending $10 million over 4 years. Upon vesting its interest, RTEC can, at its option, earn a further 29% interest (for a total 80% interest) by spending a further $20 million over 3 years. (See Transition news release of May 9, 2019)

About the Janice Lake Sedimentary Copper/Silver Project, Saskatchewan
Janice Lake is a sedimentary hosted copper project located approximately 55 km southeast of Key Lake, crossed by the high-tension power line that supplies electricity to Key Lake, in north-central Saskatchewan The project has geologic features that are analogous to the giant Udokan development project in Russia. Prior to the acquisition of the project by the Company, limited historic work had been completed principally by Noranda and Phelps Dodge that identified 20 copper occurrences over a 6 km trend. In September 2018, Forum, following up mapping and geophysical work undertaken by Transition, completed 4 drill holes intersected copper mineralization as discussed above.(see Transition News Release of October 10, 2018).

To view the source version of this press release, please visit https://www.newsfilecorp.com/release/49872