Vancouver, British Columbia--(Newsfile Corp. - November 14, 2019) - Forum Energy Metals Corp. (TSXV: FMC) ("Forum") is pleased to announce that it has received further positive assay results from three more holes on the Janice target at the Janice Lake sedimentary-hosted copper project, drilled by Rio Tinto Exploration Canada ("RTEC"). Copper/silver mineralization has been expanded along strike from 270 metres to 600 metres and multiple mineralized horizons continue to be discovered at depth on the Janice target.

Highlights from the three holes are:

With these three holes, the mineralized zone at the Janice target is now a minimum of 600m in strike length, 200m in width at surface, and has an estimated true thickness varying from several metres to more than 55m, present in several stratigraphic layers. Drill holes were orientated to crosscut the stratigraphy as close as possible at right angles, as the copper is interpreted to be mostly stratabound.

To view an enhanced version of Table 1, please visit:
https://orders.newsfilecorp.com/files/4908/49737_table1.jpg

A complete set of drill results to date and a plan map have been posted to the Home Page of Forum's website at https://forumenergymetals.com/ All drill core samples have been sent to ALS Global in Vancouver, BC for assay. Ken Wheatley, P.Geo. and Forum's VP, Exploration and Qualified Person under National Instrument 43-101, has reviewed and approved the contents of this news release. 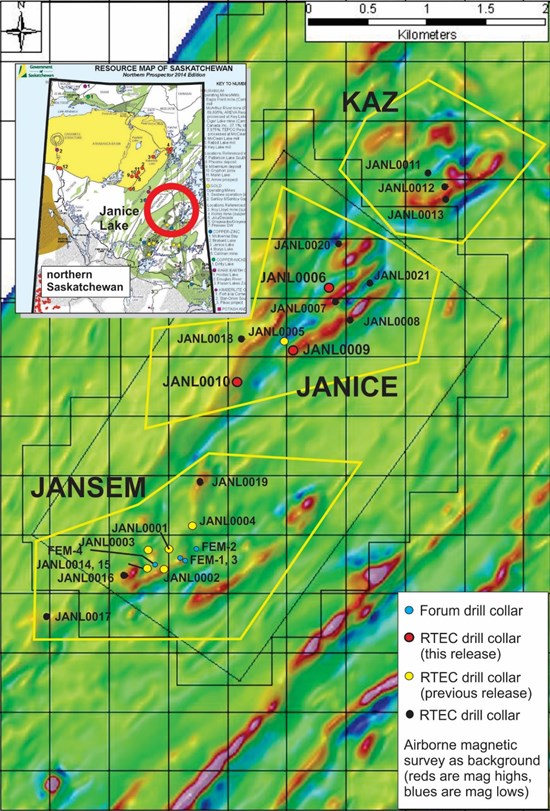 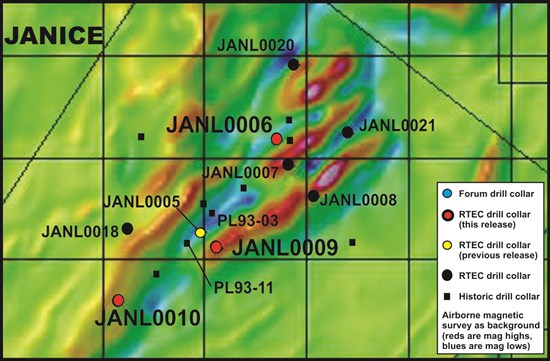 To view the source version of this press release, please visit https://www.newsfilecorp.com/release/49737