Chris Taylor, P.Geo, Chairman of the Board of Dunnedin said, "The MPD project has drill-proven potential to host a significant gold-rich copper discovery. One of the most intriguing aspects of this project are gold values that are unusually strong for this district, including 120 metres of just under a gram per tonne in drill core, and 7 metres of 3.26 g/t gold in surface trenches. On the copper side, recent surface results include an impressive 0.89% copper over 46 metres, and long mineralized intervals in historical core, showing increasing grades at depth in both locations where tested, indicating potential for a "deep porphyry" discovery. The MPD project has flown under the radar for many years, but its location near infrastructure and year-round road accessibility, demonstrate why this area is a leading copper production district in B.C. and a cost-effective location of a junior exploration company like Dunnedin to potentially build shareholder value."

Initial drilling at MPD in 2019 will consist of 1,500 metres of HQ/NQ size core to test significant porphyry-copper mineralization at depth at the Prime Zone (see Figure 1), and gold-rich mineralization intersected during historic work at the Man Zone.

Claudia Tornquist, President and CEO of Dunnedin said, "We are excited to accelerate our work on the Company's high-quality copper-gold porphyry projects. At MPD we are fortunate as the last round of historic drilling in 2013 ended on a high note and generated very promising results which we will now follow up for the first time. In addition, our work at the project to date has identified multiple further untested geochemical anomalies across the property. As we kick-off our first drill campaign at MPD, we look forward to unlocking the value of this consolidated land package with ten square kilometers of multi-zoned mineralization." 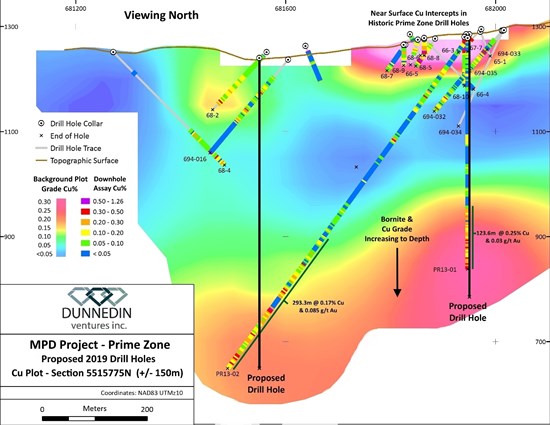 Drilling at the Prime Zone will target highly altered, well mineralized monzonite at depth. Two holes drilled at Prime in 2013 ended with intervals of 24.6 metres of 0.34% copper and 0.066 g/t gold and 12 metres of 0.33% copper and 0.073 g/t gold, approximately 450 metres apart. A key observation is that increasing copper grade was associated with both chalcopyrite and bornite mineralization. Bornite in particular is a higher-grade copper mineral that is generally associated with more centrally located zones of copper mineralization within porphyry systems, and suggests these historical holes were terminated prematurely. Dunnedin will follow up these historic holes that demonstrate prospective geology and test the potential for a large, mineralized porphyry-type system at depth.

The MPD project is accessible year-round via paved highway and situated approximately 40 kilometres southeast from Merritt, British Columbia. In preparation for upcoming drilling, the Company initiated mapping, prospecting, soil sampling and resampling of historic trenches on the property this summer. The Company will use these results to characterize the porphyry system at MPD and guide drilling. 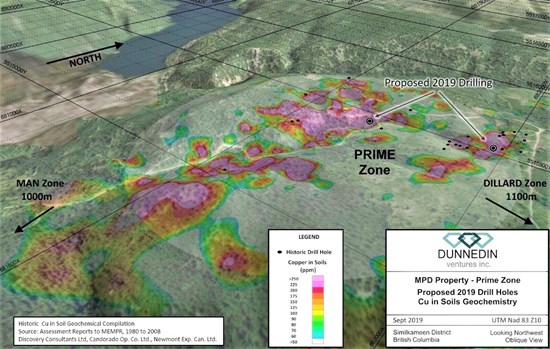 Dunnedin has received a multi-year, area-based Exploration Permit with the British Columbia Ministry of Energy, Mines and Petroleum Resources allowing up to 18 drill pads and up to 10 mechanical trenching sites in 2019 and 2020. The Company's Phase 1 drilling in 2019 will include several of these drill sites, with the remaining drilling and trenching operations approved under this permit extending into 2020.

Jeff Ward, P.Geo, Vice President Exploration and the Qualified Person as defined by National Instrument 43-101, has reviewed and approved the technical information contained in this release. The Company has not independently verified, or cannot guarantee, the accuracy of historic information disclosed herein. However, Dunnedin believes historic results to be from reliable sources using industry standards at the time.

The advanced-stage Kahuna diamond project in Nunavut hosts a high-grade, near surface inferred diamond resource and numerous kimberlite pipe targets. Dunnedin has title to 809 km2 of mineral tenure, with diamond rights covering 1,664 km2 in Nunavut, 26 kilometres from Rankin Inlet and adjacent to Agnico Eagle's Meliadine gold mine. Dunnedin's exploration is aimed at the discovery of diamondiferous kimberlite pipes, working with its advisor and largest shareholder Dr. Chuck Fipke.

Based in Vancouver, Dunnedin is backed by a world-renowned team of exploration experts with decades of combined exploration experience and significant capital market strength. Dunnedin is part of the Discovery Group of companies led by John Robins, one of the most successful mining entrepreneurs in Canada.

To view the source version of this press release, please visit https://www.newsfilecorp.com/release/49173

Sign up to receive news releases by email for Dunnedin Ventures Inc. or all companies belonging to the Mining/Metals, Diamonds industries.