The preliminary program included four diamond drill holes on two sections totaling 2,087 meters of drilling. Nine hundred and twenty-nine (929) drill core samples were analyzed and assay results were reported on March 15, 2019. While management was pleased and very encouraged by the results as there were multiple gold intersections in all 4 preliminary drill holes, it was suspected that the initial assay results did not accurately reflect the amount of gold within the core and may have in fact missed much of the gold due to "nugget effect" and the coarse nature of the gold.

Re-logging of the drill core has now been concluded and this effort, along with further recent prospecting on the property, has confirmed that much of the gold within several drill core intersections was in fact not reflected in the initial assay results. During re-logging of the core visible gold was discovered in quartz veins in at least four new locations where assays indicated only trace or very low grade gold values.

As a first step, several samples have been selected for re-assay which will include screening for metallics in an effort to mitigate against and eliminate the "nugget effect" and get a more accurate assay as to actual gold present. Additional assay results, findings and conclusions will be reported in due course.

The 2018 drill program was conducted to test a Cretaceous age swarm of syenite porphyry dykes intruded into lower and middle Cambrian sediments. Four holes on two sections were drilled (see map below) This is the first time that this package of rocks has ever been drilled.

About the Gold Hill Project

The Gold Hill property covers approximately 836 hectares and is located along the eastern edge of the Kimberly Gold Trend. The property is road accessible by paved highway to Fort Steele and then by main logging roads to (and through) the property. Driving time from Cranbrook to the center of the property is less than one hour.

The property contains a significant portion of the Boulder Creek drainage, a tributary of the Wild Horse River which is considered to be one of the greatest placer gold rivers in the entire province. Gold rushes have taken place there since the 1860's that have yielded over 48 tonnes of reported gold, making it Canada's 4th largest placer producer. The majority of the gold recovered from the Wild Horse was located along a 6 km stretch between Boulder Creek (upstream) and Brewery Creek (downstream). From the point where Boulder Creek enters the Wild Horse River for a distance of 6 kilometers downstream, a minimum of 1.5 million ounces (45,655,215 grams) of placer gold was recovered between 1864 and the 1930's. In addition, an undetermined amount of placer gold was sold in the United States during this period but no records of the amount are available. The Boulder Creek drainage is the logical source of the placer gold recovered from the Wildhorse River below.

Early efforts by prospectors to locate the source of the Wild Horse placer gold led explorers up Boulder Creek to what is now called the Gold Hill property. Although lode gold was first found in the area by prospectors in the late 1800's, the Gold Hill property has not been the subject of any systematic modern exploration and prior to this program, the property has never been drill tested.

There are two main highly prospective targets on the property:

1. The Midas / Gold Hill prospect which is situated on the southern part of the property. The Midas is in an area of steep topography and is structurally controlled.

2. The Big Chief prospect which is situated on the northern portion of the property. The Big Chief is located on an area of moderate relief and is formed by hydrothermal activity from intruded syenite dikes of Cretaceous age.

The property is nominally divided into north and south portions by Boulder Creek which flows westerly through the property. Phase 1 of the exploration program focused solely on a portion of the Big Chief prospect. The highly prospective area of the property situated south of Boulder Creek was not explored during 2018. This southern area, which includes high grade gold values in grab samples including 25.14 g/t from the Guggenheim showing, will be included in future phases of exploration.

Gold values, as tested by initial ICP analysis, ranged from slightly less than 0.5 g/t to 5.68 g/t. With reference to sample 043174 in hole NS18-01, where the initial analysis placed gold at >30,000 ppb (30.0 g/t), total metal analysis of the same sample returned a value of 66.4 g/t. To date, this is the only sample that has been analyzed for total metal. It was originally selected because of the proximal galena and visible gold.

Historical work on the property has noted the presence of metallic gold in samples that is not detected by conventional ICP analysis. A skilled, well trained and experienced Prospector discusses this phenom in Assessment Report 27,173 (Dec. 29, 2004). Again, in AR 34,920, (July 2015) a P. Geo. explained the presence of metallic gold. The following is a direct quote from AR 34,920 by the highly experienced P. Geo. who mapped the property: "work by the original prospectors and miners on the property from 1898 to 1957 did a good job of exposing gold-bearing structures and the related sulphides and gangue minerals. This work demonstrated the course nature of the gold which is commonly visible to the naked eye."

Darren Blaney, CEO of American Creek stated: "This recent work has confirmed our suspicions that much of the high grade gold in the drill core was missed by the initial assays. While it will be challenging to determine the exact amount of gold we have in the core, we welcome the problem as it means we have successfully discovered multiple intersections of high grade visible, coarse gold in quartz veins in our preliminary phase one program. A further significant step in unravelling the mystery of the potential source of the large quantity of Wild Horse river placer gold collected downstream." 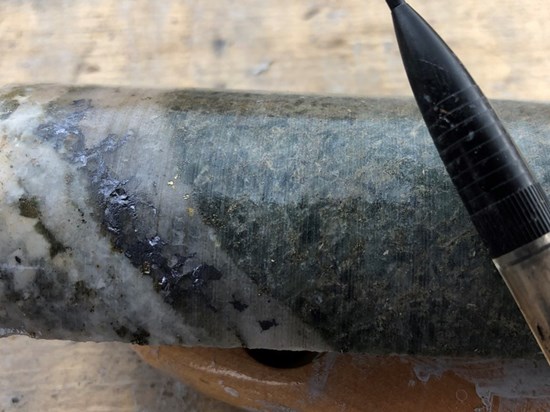 More pictures of the drill program can be viewed here in the Gold Hill Project photo gallery: https://americancreek.com/index.php/media-page/gallery/category/14-office

Frank O'Grady, P.Eng., is the Qualified Person as defined by National Instrument 43-101 for the Gold Hill Project and for this news release.

A summary of the Gold Hill project can be found here:
https://americancreek.com/images/Gold_Hill_Summary_2018.pdf

Three of those properties are located in the prolific "Golden Triangle"; the Treaty Creek and Electrum joint venture projects with Tudor Gold (Walter Storm) as well as the 100% owned past producing Dunwell Mine.

The Corporation also holds the Austruck-Bonanza, Ample Goldmax, Silver Side, and Glitter King properties located in other prospective areas of the province.

To view the source version of this press release, please visit https://www.newsfilecorp.com/release/49040