Vancouver, British Columbia--(Newsfile Corp. - October 21, 2019) -  Northway Resources Corp (TSXV: NTW) ("Northway" or "the Company") is pleased to announce the release of drill results from its inaugural 2019 exploration drilling campaign at the Healy Project, located in the Goodpaster Mining District of Alaska, USA.

Northway's 2019 drilling program at the Bronk target was designed to test a large-scale gold, arsenic and antimony soil anomaly, one of seven such anomalies at Healy that were identified during multiple successive field seasons completed by both Northway (2018) and Newmont Goldcorp (2012-2013). The inaugural ten-hole, reconnaissance-style reverse circulation (RC) drill program at Bronk intersected significant gold mineralization over broad intervals, and at shallow depths, across a 150m wide structural zone. These results are summarized below:

Zach Flood, President and CEO of Northway states: "We are very excited to have intercepted shallow and broad intervals of disseminated gold mineralization in every hole from our maiden drill program at Healy. Part of the scope of this initial reconnaissance program was to better understand the nature and tenor of gold within the Bronk zone. The results have proven that there is widespread gold mineralisation associated with structural corridors within the metamorphic basement rocks. The style of mineralization is consistent with that of an orogenic gold system. Going forward our programs will focus on testing and delineating additional targets across the property." 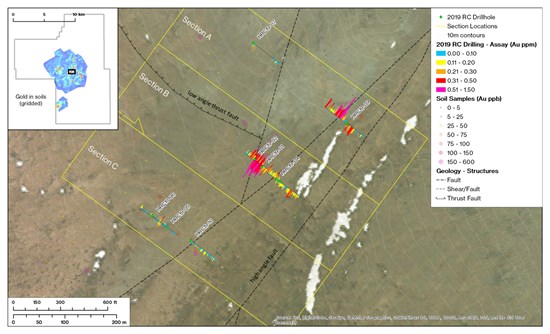 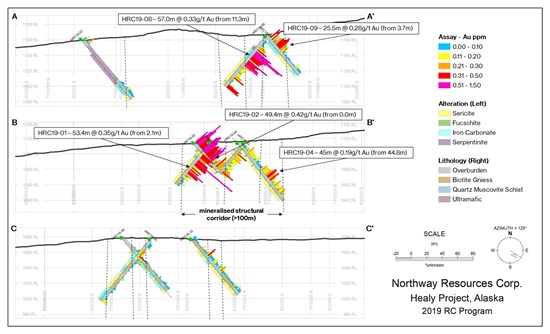 The 2019 reconnaissance drilling program focused on Bronk, which is one of seven significant gold-in-soil anomalies that has been defined by systematic surface sampling across the Healy project. Some of the most anomalous gold-in-stream catchments have only seen limited ridge and spur soil sampling, and no mapping or prospecting. Northway plans to conduct follow up soil sampling, ground based geophysics (VLF, Magnetics, and IP), as well as mapping and prospecting across additional under explored areas of the property to expand its inventory of targets and prepare for future drill programs. 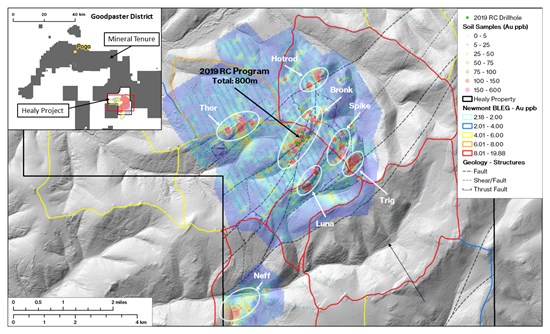 About the Healy Project

The Healy Project was first identified and staked by Newmont in 2012, following a two-year regional stream sediment sampling program in eastern Alaska. Two years of follow up mapping, prospecting and systematic soil sampling defined numerous, kilometer-scale gold, arsenic and antimony in soil anomalies. Healy is located along a major northeast trending fault system, as well as the prospective regional contact between metasedimentary rocks and cretaceous intrusive rocks, similar to the neighbouring Pogo and Tibbs areas. The property scale structural geology is defined by numerous low-angle thrust faults cut by steeply dipping northeast trending faults. Gold anomalism seems to be spatially associated with both steeply dipping faults and low angle thrust faults. No recorded work has been done on the Healy property prior to Newmont in 2012 and 2013, and now Northway. The recent 2019 RC drill program was the first ever drill test of this newly identified gold system in the Goodpaster Mining District of Alaska, host of the world class Pogo gold deposit (10+ million ounces of gold).

The technical content of this news release has been reviewed and approved by Luke van der Meer, B.Sc., P.Geo., VP Exploration for the company, and qualified person as defined by National Instrument 43-101

All samples were analyzed by Bureau Veritas Laboratories (BV) in Vancouver, British Columbia. They were prepared for analysis according to BV method PRP70-250: individual samples were crushed to 2mm and a 250g split was pulverized for analysis. Gold was tested by Lead Collection Fire Assay Fusion with an atomic absorption finish on a 30g nominal sample (method FAA430). Additional 59 elements analyses were completed by ICP-AES using a four-acid digestion (method MA250).

Northway is a Canadian gold exploration company focused in Alaska. The company is currently exploring the Healy Project, as well as its 100% owned Napoleon Property, located in eastern Alaska.

The Healy Project was optioned from Newmont in 2018. Northway Resources has the right to earn up to 70% in the Healy Project by spending a total of USD$4m by Dec 31, 2022.

The Healy Project covers 18,470 ha of ground within Alaska's Goodpaster Mining District. The Goodpaster District is host to the world-class Pogo gold mine, currently operated by Northern Star Mining.

Further information can be found on the Company's website www.northwayresources.com

To view the source version of this press release, please visit https://www.newsfilecorp.com/release/48915

Sign up to receive news releases by email for Northway Resources Corp. or all companies belonging to the Mining and Metals, Precious Metals industries.