The Jefferson Gold Project now covers 705 hectares (1,641 acres) and wraps all the way around the former Brewer Gold Mine (see Image 1 below). Brewer's previous operators produced 178,000 ounces of oxide gold in the 1990s from open pit mining that extended to approximately 50-metre depths, where they began encountering copper and gold-rich sulfides that could not be processed by the oxide processing facility. Brewer's prospective geology, including diatreme breccias, associated high sulphidation alteration, gold and copper mineralization, and geophysics support a possible porphyry-style copper-gold system at depth (Schmidt, R.G., 1978, The Potential for Porphyry Copper-Molybdenum Deposits in the Eastern United States, US Geological Survey).

"Our Jefferson Project has secured the most prospective land surrounding the former Brewer Gold Mine on the southwest-northeast Carolina Slate Belt gold trend, which hosts the Haile Gold Mine just down the road. Last week our team walked most of our leased land and we saw ample firsthand evidence that our strategic approach to exploration will be successful. Among other compelling findings, we saw multiple examples of outcrop and subcrop of strongly altered rock along the Brewer's known northwest trend, extending from mineralization at the former mine. This seeming extension of Brewer's northwest trend is 400 metres wide and extends across Pancon's Jefferson Project for nearly 1 kilometre beyond the Brewer property boundary," stated Layton Croft, President & CEO. 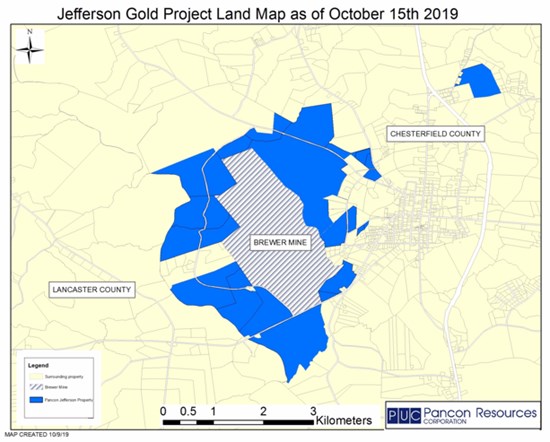 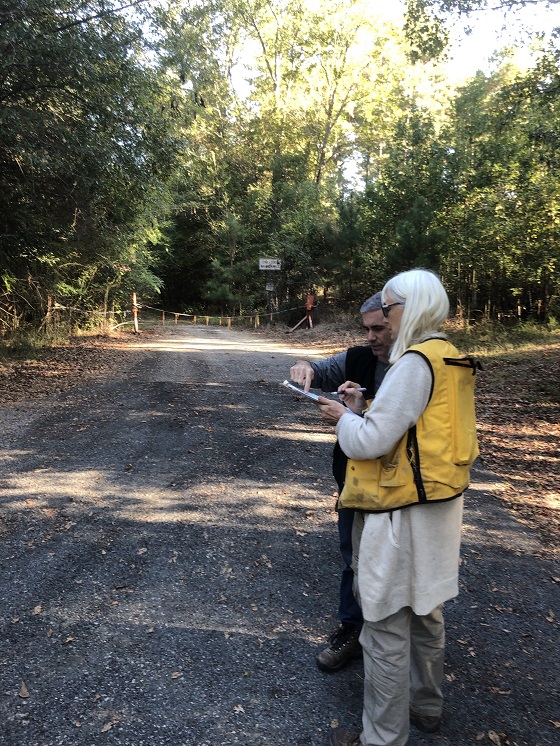 Pancon expects this work will lead to additional geophysics and a full drill program on targets believed to correlate to the Brewer gold system and with geological similarities to the Haile Gold Mine, including similar host rock lithology, similar age, similar stratigraphy and time of mineralization, as well as similar alteration style and mineral assemblage (Ayuso, R.A., Wooden, J.L., Foley, N.K., Seal, R.R.II, Sinha, A.K., 2005, U-Pb zircon ages and Pb isotopic geochemistry of gold deposits in the Carolina Slate Belt of South Carolina; and Foley, N.K. and Ayuso, R.A., 2012, Gold deposits of the Carolina Slate Belt, southeastern United States: age and origin of the major producers). Pancon cautions that the mineralization on adjacent and nearby properties is not necessarily indicative of the mineralization that may be identified on the Company's property.

About the Jefferson Gold Project

Pancontinental Resources Corporation (TSXV: PUC), or Pancon, is a Canadian junior mining company focused on North American gold and battery metals projects surrounding or near producing or former mines in proven and safe mining districts. Pancon's 100%-owned Jefferson Gold Project is 15 km along trend northeast from the Haile Gold Mine and surrounds the former Brewer Gold Mine, on the prolific and underexplored Carolina Slate Belt in South Carolina, USA. In addition, Pancon has five nickel-copper-cobalt projects in Northern Ontario. The Montcalm, Gambler, Nova and Strachan Projects are near and/or surround the former Montcalm Ni-Cu-Co Mine property owned by Glencore and located 65 km northwest of Timmins. The St. Laurent Project has an advanced Ni-Cu-Co-Au-Pt-Pd target located 50 km south of the Detour Lake Mine and 20 km southwest of the Casa Berardi Mine.

The technical information in this news release has been prepared in accordance with Canadian regulatory requirements as set out in NI 43-101 and reviewed and approved by Richard "Criss" Capps, PhD, RPG, SME REG. GEO, a Qualified Person as defined by NI 43-101.

To view the source version of this press release, please visit https://www.newsfilecorp.com/release/48829