Vancouver, British Columbia--(Newsfile Corp. - October 1, 2019) - International Lithium Corp. (TSXV: ILC) (the "Company" or "ILC") is pleased to announce the receipt of the final results from an unmanned aerial vehicle magnetometer ("UAV-MAG") survey designed to collect high-resolution magnetic field data over the Raleigh Lake project area. The resulting magnetic images confirm that a geologic body with elevated magnetic response, previously interpreted to be a gabbroic intrusive hosting the lithium bearing pegmatites, continues onto the adjacent group of claims acquired by ILC in 2018.

The 2019 UAV-MAG survey was conducted by Pioneer Aerial Surveys Ltd., a subsidiary of Global UAV Technologies Ltd. It covered a total of just under 500 line-kilometres using a 40 metre line spacing. The data were merged with the 2016 UAV-MAG survey which covered an additional 189 line-kilometres for almost 700 line-kilomtres of continuously profiled magnetic data recorded at an approximate ground clearance of 50 metres.

A map showing a gridded image of the merged data sets is given in Figure 1. The magnetic body interpreted to be the gabbroic host to the pegmatites is clearly visible in the eastern-central portion of the map. It measures approximately 3 kilometres by 1 kilometre which is comparable in size to the gabbroic rocks hosting the mineralized pegmatites at the Tanco mine.

The Two-mica granite is coarsely mapped in at the south-western extent of the survey area. It is thought to be the parental magma source for the spodumene bearing pegmatites at Raleigh Lake. It is located between four and six kilometres from the gabbro indicating that the gabbro is the optimal distance from the magmatic source body for fractionation to favor the crystallization of spodumene, a lithium rich mineral (Figure 2).

Several regional structures can be interpreted from the magnetic image shown in Figure 1. Some of these strucures transcend from the Two-mica granite to the Raleigh Lake gabbro. The structures cut the gabbro at its northern terminus, in the vicinity of the historic drilling, and in the central (thickest) portion of the body. No drill holes have tested the main gabbro body and all the historic drill holes at the terminus have intersected spodumene bearing pegmatites that dip gently southeasterly and flatten as they intrude the edge of the gabbro. There is a striking resemblence to the emplacement style of mineralized pegmatites at Tanco making the Raleigh Lake gabbro a highly prospective target.

The Company is planning to investigate these interpretations with a proposed 2,000 metre drill program, focusing on stepping out from the known mineralization both along strike to the southwest (toward the Two-mica granite) and down dip into the gabbroic body. 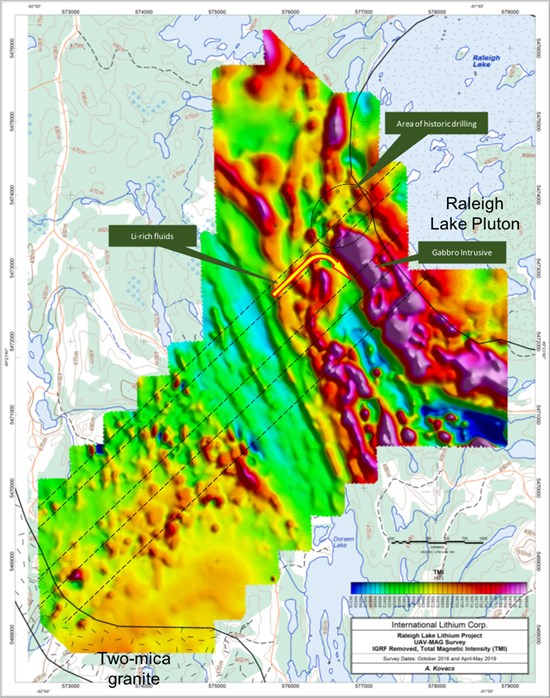 Figure 1. Total magnetic intensity image from the Raleigh Lake UAV-MAG surveys. Regional structures can be interpreted emanating from the Two-mica granite to the gabbro which is hosting the mineralized pegmatite.
To view an enhanced version of this graphic, please visit:
https://orders.newsfilecorp.com/files/3232/48390_4d35d78904fde858_003full.jpg 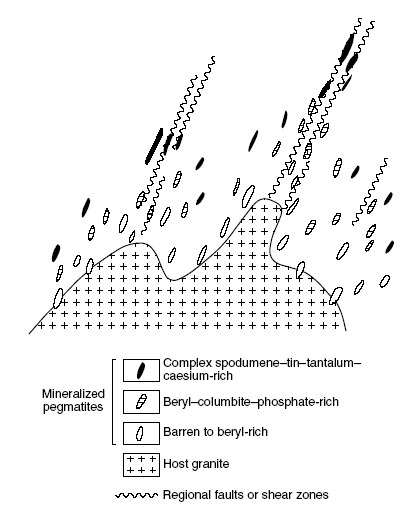 Figure 2. Schematic section of a zoned fertile granite-pegmatite system (Cerny, 1989). Note the tendancy for pegmatites to form along structural corridors.
To view an enhanced version of this graphic, please visit:
https://orders.newsfilecorp.com/files/3232/48390_4d35d78904fde858_004full.jpg

John Wisbey, Chairman and CEO of International Lithium Corp. stated, "We are delighted that the magnetometer survey at Raleigh Lake reinforces our belief that the geology is very promising. With an increasing awareness in Canada and the USA of the need for North American self sufficiency in lithium and other battery metals, we are also very pleased that the mineral rights remain wholly owned by International Lithium Corp. with no royalty or encumbrance over the property. The surrounding infrastructure is excellent with immediate access to the Trans Canada Highway, electricity and rail services to Lake Superior and the industrial heartland of North America. This remains a project that our board place a very high strategic value on."

Afzaal Pirzada, P. Geo., a Qualified Person as defined by NI 43-101 and a consultant to the Company, has reviewed and approved the technical content in this news release.

The Company's primary strategic focus is now on the Mariana project in Argentina and on the Raleigh Lake project in Canada.

The Company has a strategic stake in the Mariana lithium-potash brine project located within the renowned South American "Lithium Belt" that is the host to the vast majority of global lithium resources, reserves and production. The Mariana project strategically encompasses an entire mineral rich evaporite basin, totalling 160 square kilometres that ranks as one of the more prospective salars or 'salt lakes' in the region. Current ownership of the project is through a joint venture company, Litio Minera Argentina S. A., a private company registered in Argentina, now owned 85.8% by Ganfeng Lithium and 14.2% by ILC. In addition, ILC has an option to acquire 10% in the Mariana project through a back-in right.

The Raleigh Lake project, now consisting of 3,027 hectares of adjoining mineral claims in Ontario, is now regarded by ILC management as ILC's most significant project in Canada. It is 100% owned by ILC, is not subject to any encumbrances, and is royalty free.

The ownership of the Mavis Lake project is now 51% Pioneer Resources Limited (ASX:PIO) ("Pioneer") and 49% ILC. In addition, ILC owns a 1.5% NSR on Mavis Lake. Pioneer has an option to earn an additional 29% by sole-funding a further CAD $8.5 million expenditures of exploration activities, at which time the ownership will be 80% Pioneer and 20% ILC.

The Forgan Lake project will, upon Ultra Lithium meeting its contractual requirements pursuant to its agreement with ILC, become 100% owned by Ultra Lithium (TSXV: ULI), and ILC will retain a 1.5% NSR on Forgan Lake.

With the increasing demand for high tech rechargeable batteries used in electric vehicles and electrical storage as well as portable electronics, lithium has been designated "the new oil", and is a key part of a "green tech", sustainable economy. By positioning itself with solid strategic partners and projects with significant resource potential, ILC aims to be one of the lithium and battery metals resource developers of choice for investors and to continue to build value for its shareholders.

International Lithium Corp.'s mission is to find, explore and develop projects that have the potential to become world class lithium and rare metal deposits. A key goal is to become a well funded company to turn that aspiration into reality.

Except for statements of historical fact, this news release contains certain "forward-looking information" within the meaning of applicable securities law. Forward-looking information or forward-looking statements in this or other news releases may include: the effect of results of the preliminary economic assessment of the Mariana Joint Venture Project, timing of publication of the PEA technical report, anticipated production rates, the timing and/or anticipated results of drilling on the Raleigh Lake or Mavis Lake projects, the expectation of feasibility studies, lithium recoveries, modeling of capital and operating costs, results of studies utilizing membrane technology at the Mariana Project, budgeted expenditures and planned exploration work on the Avalonia Joint Venture, satisfactory completion of the sale of mineral rights at Forgan Lake, satisfactory completion of the purchase of additional mineral rights at Raleigh Lake, increased value of shareholder investments, and continued agreement between the Company and Jiangxi Ganfeng Lithium Co. Ltd. regarding the Company's percentage interest in the Mariana project. Such forward-looking information is based on a number of assumptions and subject to a variety of risks and uncertainties, including but not limited to those discussed in the sections entitled "Risks" and "Forward-Looking Statements" in the interim and annual Management's Discussion and Analysis which are available at www.sedar.com. While management believes that the assumptions made are reasonable, there can be no assurance that forward-looking statements will prove to be accurate. Should one or more of the risks, uncertainties or other factors materialize, or should underlying assumptions prove incorrect, actual results may vary materially from those described in forward-looking information. Forward-looking information herein, and all subsequent written and oral forward-looking information are based on expectations, estimates and opinions of management on the dates they are made that, while considered reasonable by the Company as of the time of such statements, are subject to significant business, economic and competitive uncertainties and contingencies. These estimates and assumptions may prove to be incorrect and are expressly qualified in their entirety by this cautionary statement. Except as required by law, the Company assumes no obligation to update forward-looking information should circumstances or management's estimates or opinions change.

To view the source version of this press release, please visit https://www.newsfilecorp.com/release/48390