"We are excited to have finalized an agreement to acquire the Valeriano property which lies in a region of world class precious and base metals deposits," said Carl Hansen, CEO of ATEX. "While prior operators focussed largely on the near surface potential, it wasn't until recently that the porphyry potential of the property was recognized. Deeper seated systems, such as Valeriano, represent the next stage in copper gold porphyry mine development with major mining companies now exploring and developing bulk tonnage underground mines. We are eager to start a systematic exploration campaign with the goal of defining the full potential of the Valeriano copper gold property."

The Valeriano property is underlain by altered felsic volcanics (figure 2) which at depth have been intruded by a multi-phase granodiorite porphyry. The mineralized system displays a classic porphyry-style alteration pattern from high-level advanced argillic alteration through to a well-developed potassic alteration zone close to the porphyry with associated stockwork and disseminated copper and gold mineralization (figure 3). A large surface alteration zone (lithocap), covering a surface area of approximately 13 by 4.5 kilometres, extends from the Valeriano property northward over Antofagasta/Barrick's El Encierro project. Antofagasta is earning a 51% interest in the El Encierro property from Barrick by spending US$25 million and completing a PEA by January 2020.

During the mid-1990's, Phelps Dodge, and later Barrick, explored the Valeriano property for near surface gold mineralization drilling 47 holes to a maximum depth of 550 m. The drill programs outlined a zone of near-surface epithermal gold mineralization over an area of approximately 400 m by 400 m to depths of approximately 100 m below surface. Drill intercepts included 89 m grading 1.50 g/t Au (RDH-V27) and 0.62 g/t Au over 170 m (RDH-V31). Barrick terminated its option agreement in 1997 having not discovered a deposit of sufficient size.

In 2010, Hochschild optioned Valeriano drilling 16 diamond drill holes in three campaigns for a total of 14,270 m. During the second drill campaign, Hochschild recognized porphyry-style alteration at depth and in the third season they drilled three holes, approximately 225 to 375 m apart, to depths of up to 1,878 m intersecting well-defined advanced argillic and phyllic alteration zones before entering a chalcopyrite and bornite-bearing, potassic-altered granodiorite porphyry (figures 2 and 3).

VAL12-09 is located 375 m west of, and drilled roughly parallel to, VAL13-14. The hole cut a copper gold mineralized inter-mineral breccia, related to the porphyry system, returning 848 m grading 0.64% Cu eq. (Table 1). The hole did not intersect the mineralized granodiorite porphyry cut in the holes described above and instead entered lower grade inter to late-mineral breccias and porphyry returning 130 m grading 0.38% Cu eq. at the end of the hole.

A subsidiary of ATEX has acquired an option agreement with Sociedad Contractual Minera Valleno ("Valleno"), an arm's-length Chilean corporation that owns the Valeriano concessions. Under the terms of the option agreement dated August 29, 2019 (all figures are US$), ATEX may make payments of $12.0 million over 4 years as follows in order to acquire 100% of the Valeriano concessions: $200,000 upon signing, $300,000 upon the commencement of drilling, $3.5 million on the second anniversary of signing and $8.0 million on the fourth anniversary. Half of the $3.5 million payment may be paid in ATEX common shares at the option of ATEX and half of the final $8.0 million payment may be paid in ATEX common shares at the vendor's option. The option agreement was originally acquired from Valleno by a third party. Under a transfer and assignment agreement, $150,000, 2 million ATEX units and a net smelter royalty of 0.25% is payable by ATEX to SBX Asesorías e Inversiones Limitada ("SBX"), who originally acquired the option. Each ATEX unit is comprised of one common share and one full warrant exercisable at C$0.40 for four years. Neither Valleno nor SBX are Non-Arm's Length Parties within the meaning of TSX Venture Exchange policies.

Following completion of the first two years of work expenditure commitments and paying the required $4.0 million of payments, ATEX will earn a 49% interest in the Valeriano concessions. By completing all expenditures and making all required payments by the fourth anniversary date, ATEX will acquire a 100% interest in the Valeriano property subject to a total net smelter royalty of 2.5%.

The agreements and payments are subject to TSX Venture Exchange acceptance and approval.

Diamond drill core samples were prepared according to industry best practice under direct supervision of Hochschild and shipped directly to ALS laboratories in Chile for sample preparation and analysis using ICP-MS and fire assay. Internal QA/QC, including use of industry blanks and standards, was conducted by Hochschild. Drillhole and surface assays, geology and drillhole locations are shown as recorded in the Hochschild database as provided to ATEX by the vendors. ATEX has reviewed and validated the integrity of the data but has not independently verified the accuracy of the assay results.

Drill results related to the 1990's exploration campaign undertaken by Phelps Dodge and Barrick pre-date NI 43-101 disclosure requirements and should be considered historical in nature. While the results are relevant and there is no reason to doubt their veracity, a Qualified Person has not completed sufficient work to confirm the results.

The scientific and technical information in this press release has been reviewed and approved by David R. Hopper, a Qualified Person as defined by National Instrument 43-101 Standards for Disclosure for Mineral Projects. As the supervising geologist for the Hochschild exploration campaigns, Mr. Hopper, confirms the veracity of the Hochschild data, based upon his person knowledge of the work undertaken and procedures used. David Hopper is a Chartered Geologist of the Geological Society of London, Fellow No. 1030584, and has over 25 years of relevant experience in exploration of porphyry-epithermal deposits. He resides in Santiago, Chile and is independent of ATEX within the meaning of NI 43-101.

ATEX is a TSXV-listed minerals exploration company focused on the acquisition, development and monetization of projects throughout the Americas.

On behalf of ATEX Resources Inc.

Forward-looking statements involve known and unknown risks, future events, conditions, uncertainties and other factors which may cause the actual results, performance or achievements to be materially different from any future results, prediction, projection, forecast, performance or achievements expressed or implied by the forward-looking statements. Such factors include, among others, changes in economic parameters and assumptions, the interpretation and actual results of current exploration activities; changes in project parameters as plans continue to be refined; the results of regulatory and permitting processes; future metals price; possible variations in grade or recovery rates; failure of equipment or processes to operate as anticipated; labour disputes and other risks of the mining industry; the results of economic and technical studies, delays in obtaining governmental approvals or financing or in the completion of exploration, as well as those factors disclosed in ATEX's publicly filed documents. 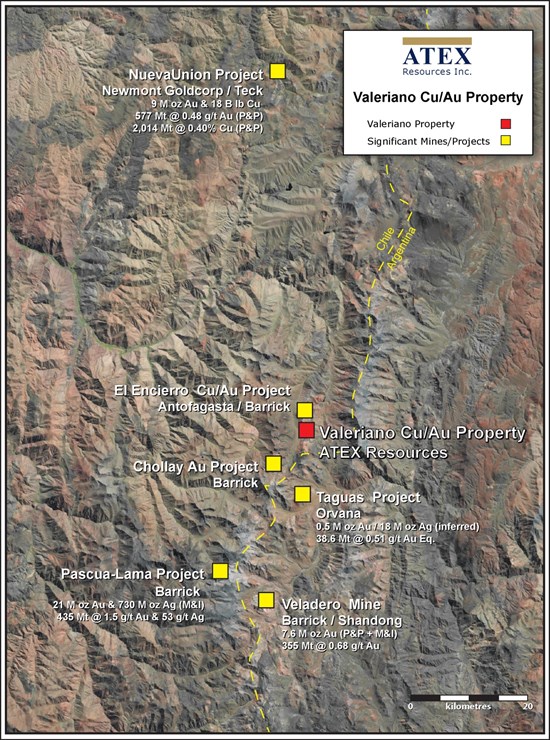 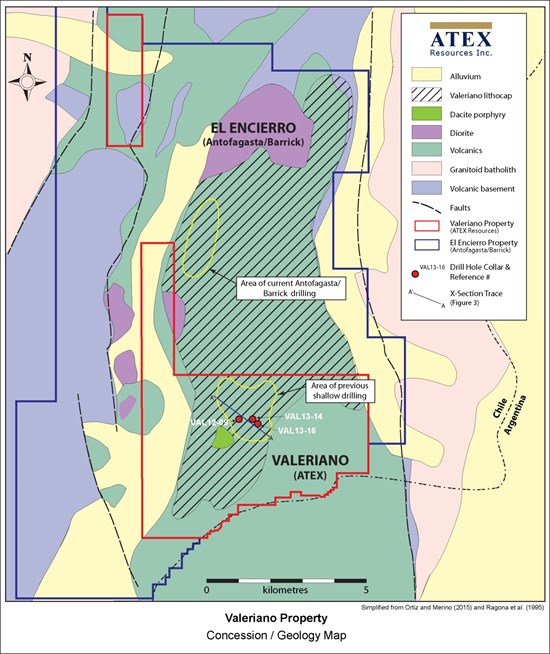 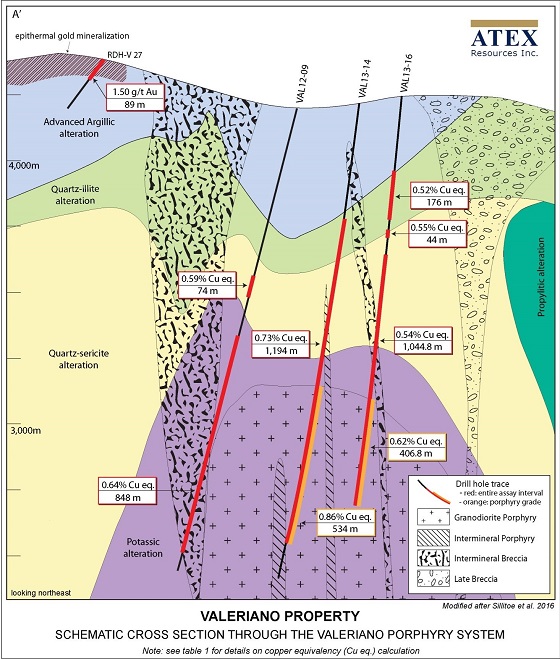 To view an enhanced version of Figure 3, please visit:
https://orders.newsfilecorp.com/files/6303/47989_figure3.jpg

To view the source version of this press release, please visit https://www.newsfilecorp.com/release/47989

Sign up to receive news releases by email for ATEX Resources Inc. or all companies belonging to the Mining/Metals industry.