Sudbury, Ontario--(Newsfile Corp. - September 18, 2019) - Transition Metals Corp. (TSXV: XTM) ("Transition", "the Company") is pleased to disclose the balance of assay results from a program of reverse circulation (RC) drilling completed this summer at its Highland Gold project in Cape Breton, Nova Scotia. The results are interpreted to confirm strike and dip extensions to mineralization identified at Zone 6A and indicate significant grades and thicknesses of gold at Zone 6B which is located approximately 250 metres southwest of Zone 6A. Testing Zone 6B, hole 19-TMC-RC-11 intersected 9.0 metres grading 6.14 g.t Au including 2.0 metres grading 25.46 g/t Au. Zones 6A and 6B are respectively located approximately 2 kilometres east of Main Zone where RAB drilling completed by the Company in late 2018 returned a 9.14 metre interval grading 23.22 g/t Au.

Company CEO Scott McLean commented, "The results from this drilling program highlight significant grades and widths of gold mineralization in three separate zones that occur within a 2 square kilometre portion of our property. Till geochemical sampling and geophysical data suggest good potential for an even larger camp scale target associated structures that occur extensively on the property. There is limited bedrock exposure hence further geophysics and drilling will be required to test this very prospective corridor and to begin to evaluate other prospective target areas identified on the property."

The objective of the 2019 RC drilling program was to investigate near surface mineralized showings accessible from the MacMillan Road for the purpose of assessing the larger scale secondary order structures highlighted by the geophysical survey flown over the property in 2018. In total 28 holes for 568 metres were completed in May and June of 2019. Drilling was completed by a mobile skidder mounted percussion RC rig capable of penetrating between 70-100 feet (30 metres) into bedrock drilling vertically.

On July 15th 2019 Transition released initial assay results from composite samples submitted for the first 6 holes as well as 4 one metre length detailed samples collected from hole 19-TMC-RC-01. This release presents detailed assay results from the remainder of hole 19-TMC-RC-01 and detailed results from the balance of holes completed during the program. Table 1 presents a summary of mineralized intervals encountered over the program with the last column in the table describing the area the drilling was completed. Figure 1 depicts the project location, known zones of mineralization and areas drilled during the program. Figure 2 presents a plan view of drilling results from the 6A and 6B target areas.

Nine holes were drilled in the vicinity of mineralization exposed at surface by previous trenching completed in the vicinity of the 6A target area with hole depths ranging from 10 to 29 metres. Of this drilling, only two holes failed to intersect anomalous gold values, (19-TMC-RC-05 and 19-TMC-RC-08) which were drilled to test areas interpreted to occur in the footwall of the targeted structure. Drilling at 6A confirms a south west dipping subcropping zone of mineralization exposed at surface and by drilling over a strike length of 100 metres to a vertical depth of approximately 50 metres which remains open along strike and at depth. The drilling targeted an area up dip from 2 historical diamond drill holes that returned elevated gold values through zones of poor core recovery that the company interprets to be an extension of the 6A Zone.

Seven holes were drilled in the vicinity of mineralization exposed at surface by previous trenching completed in the vicinity of the 6B target area with hole depths ranging from 10 to 29 metres. Of this drilling, only one hole failed to intersect anomalous gold values, (19-TMC-RC-12) which was drilled to test the footwall of the targeted structure. Based on the results Company geologists interpret that mineralization intersected in holes 19-TMC-RC-11, 15 and 16 are associated with a steeply dipping structure that may be offset across a vertically dipping north-south striking fault from mineralization intersected in holes 19-TMC-RC-10, 13 and 14 which appears associated with a flatter southwest dipping structure. While it remains unclear how the mineralization associated with these structures may correlated the trends they define remain open for expansion along strike and at depth.

Four holes were drilled to obtain control data points to along the Main Zone to the northwest of RAB drilling completed in 2018 which returned exceptional gold values off the southeast extension of areas previously exposed by trenching and to confirm the upper contact with bedrock the vicinity of an area extracted historically as a bulk sample. Of the 4 holes completed, only one was successful in reaching its target depth (19-TMC-RC-21).

Twelve other holes were drilled to investigate features of geological or geophysical interest highlighted by company Geologists in area with no bedrock exposure. None of these holes returned significantly elevated gold results.

The company has applied for crown access permits seeking approval to conduct additional till sampling, geophysics and drilling on the property. The Company is also planning to complete an orientation IP geophysical survey over portions of the property accessible from the MacMillan and Doyle roads in October and would like to follow up the results of this survey with additional drilling. The Company is actively seeking a partnership with an established mining company to help it further explore and advance this exciting new maritime gold project.

Transition has been invited by the Mining Association of Nova Scotia to provide an update on the Highland Project as a featured speaker at the Nova Scotia Gold Show at the Alt Hotel, Halifax Airport from October 17-18, 2019. Information regarding attending the show can be obtained at http://tmans.ca/goldshow.

The Highland Gold property covers an extensive cluster of high-grade gold occurrences in an area that has seen very limited exploration. The property is located approximately 60 kilometres northwest of the city of Sydney, Nova Scotia in the Cape Breton Highlands. It consists of staked mining licenses on crown land that covers approximately 5,408 hectares. The property can be easily reached by a major road (Highland Road) and a network of logging roads.

Work completed by Transition has highlighted large scale structures, strong alteration and widespread bedrock mineralization that are consistent with aspects of an epithermal gold system. In particular, the high resolution airborne magnetic survey highlighted a large (4 kilometre long) region of low magnetic susceptibility developed around one of the major structures on the property associated with widespread propylitic alteration.

RC drilling produces a mixture of crushed rock powder and chips which are flushed using compressed air from the bit face through the rods to a cyclone bagging system at surface. Percussion drilling methodologies were selected by the Qualified Person as being more effective at recovering sample material through intervals of oxidized and friable mineralization known to occur near surface on the property than was previously achieved by diamond drilling on the property. Samples were collected at the drill using a cyclone bagging system at 1 metre intervals as drilling advances. Each one metre drilled run produces approximately 16-20 kg of sample material which was homogenized and representatively split on site such that approximately 25% of the sample was submitted for assay with the remainder available for use in composite sampling, duplicate analysis or discard. Transition Metals' QA/QC procedures conform to industry best practices and include the insertion of field and lab blanks and duplicates. Samples were shipped in sacks secured with zip ties to the lab for chemical analysis. All analytical work performed on samples was conducted by SGS Laboratories in Lakefield, Ontario. Samples were dried, weighed then crushed to 75% passing less than 2 mm, with a 1,000 g split pulverized to 85% passing 75µm screen. A 50 g aliquot was analyzed by fire assay methods with samples returning greater than 10 g/t gold being re-analyzed by fire assay with a full gravimetric finish. The quality system used by SGS complies with the requirements of ISO 17025:2005. Where duplicate analysis exist the average of the values obtained was used for reporting purposes.

The technical elements of this press release have been approved by Mr. Greg Collins, P.Geo. (APGO, APGNS), Chief Operating Officer for Transition Metals and a Qualified Person under National Instrument 43-101. 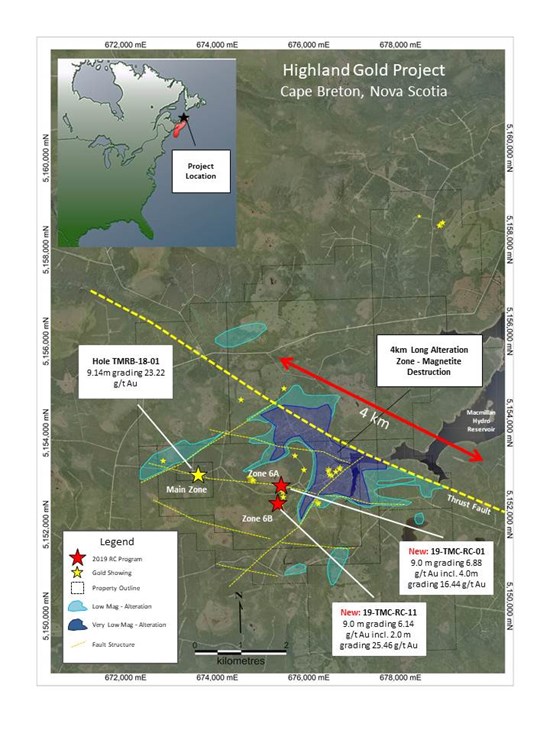 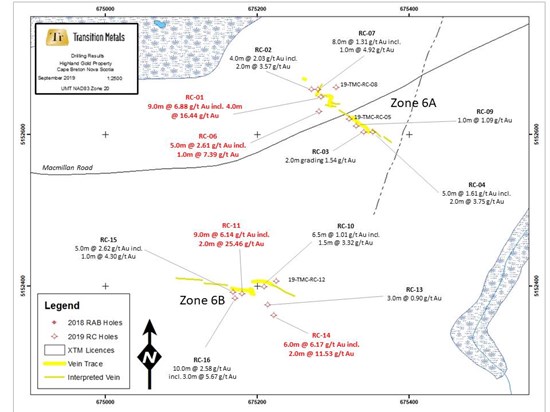 Figure 2. Plan Map Showing Collar Locations and Highlight Assay Results from the 6A and 6B Target Areas

To view the source version of this press release, please visit https://www.newsfilecorp.com/release/47890

Sign up to receive news releases by email for Transition Metals Corp. or all companies belonging to the Mining and Metals industry.