Aurania's Chairman and CEO, Dr. Keith Barron, commented, "We continue to build our portfolio of epithermal targets, which currently sits at 20 targets, in our search for the next Fruta del Norte. The way in which the Tiria targets for gold-silver are arranged around a corridor of silver-zinc-lead, suggests that we are looking at a large and coherent mineralized system. We believe that the silver, zinc and lead accumulated in the hotter core in the centre of the system and that gold and silver precipitated at the cooler margins. I'm impressed by the grades in the core target area and I believe that we are likely to be in a position to joint venture the silver-zinc-lead target shortly."

Four separate target areas have been identified through the presence of blocks of various types of silica that exhibit characteristics of epithermal systems, such as chalcedony veins and hydrothermal breccia. The Tiria targets have a combined length of approximately 20km and two of the targets are up to 3km wide (Figure 1). Initial ridge-and-spur soil sampling has identified north- to northwest-trending areas of enrichment in pathfinder elements for epithermal systems, such as naturally occurring antimony and mercury. Silver distribution in soil is an invaluable exploration tool in this area since it occurs in both the epithermal environment and the zinc-lead target. These corridors of silver and pathfinder enrichment will be the focus of further exploration for epithermal gold-silver.

High-grade silver (up to 325 grams per tonne ("g/t")) with high-grade zinc and lead were reported in Aurania's first press release on the Shimpia target on November 29, 2018. Further exploration has encountered even higher grades, with up to 710g/t silver, 42% zinc and 9.2% lead in boulders in streams (Table 1). A major step forward was the discovery of a 300m long area of breccia in carbonate host-rock - the highest-grade sample from which contains 356g/t silver, 12.7% zinc and 11% lead. The breccia contains abundant sphalerite (zinc sulphide) and galena (lead sulphide). The silver is not identifiable as a separate mineral and is suspected to occur within galena.

The current exploration concept is that the conspicuous magnetic zone at Jempe, interpreted as a buried porphyry with copper potential, is genetically related to the silver-zinc-lead zone at Shimpia, that then evolves outward and upward into the Tiria epithermal targets for gold and silver. Magnetic data from the heliborne survey flown by Aurania shows that these targets are linked by faults that provided conduits along which the metal-bearing fluids first deposited copper, followed by silver-zinc-lead, finally emerging at surface to form the silica terraces that represent the four epithermal targets at Shimpia (Figure 2).

Table 1: Selected analytical results for outcrop and boulder samples from the Shimpia target. 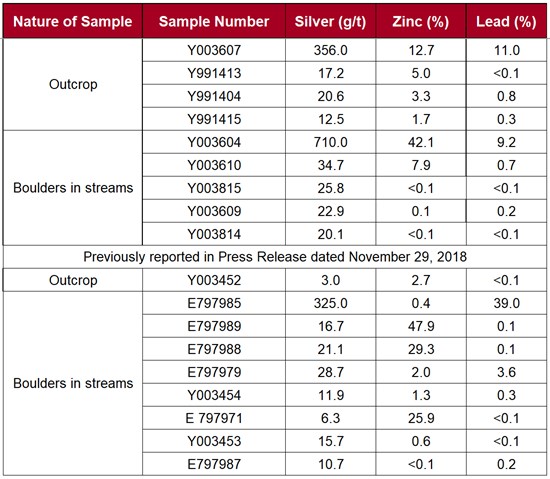 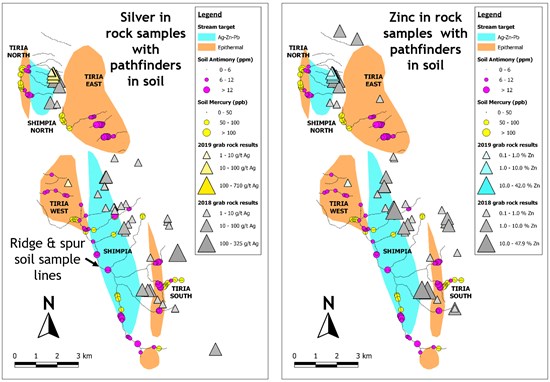 Figure 1. Map of the Shimpia - Tiria targets showing the location & grade of samples of rock (grab samples from boulders in streams) and outcrop with the distribution of silver and pathfinder elements, antimony and mercury, in ridge-and-spur soil samples.

Further exploration will focus on the corridors of enrichment of pathfinder elements and silver in the epithermal target areas with the aim of advancing them toward scout drilling. This work will include additional soil sampling, geological mapping and detailed alteration mineral analysis of soil and rock samples. Induced polarization geophysical surveys may also be considered as a means of imaging silica-rich features such as veins, as well as sulphide minerals at depth. The silver-zinc-lead mineralization is not core to Aurania and is likely to be made available to interested parties for joint venture.

Update on Drilling at Yawi

The water-use permit has been obtained for the scout drilling at Yawi and final preparations are underway for the program which is expected to commence on the first of four targets later in September. 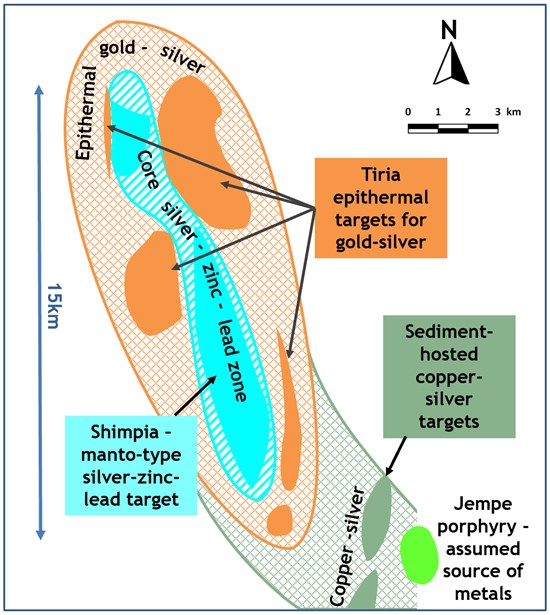 Figure 2. Map showing the Jempe porphyry target, potentially the source of metals that first deposits copper-silver in sedimentary rocks, followed by silver-zinc-lead as the metal-bearing fluids cool, and finally epithermal gold-silver as the fluids cool further. The way in which the Tiria targets for gold-silver are arranged around the silver-zinc-lead zone in the centre, suggests that we are looking at a large and coherent mineralized system.

Laboratories: The samples were prepared for analysis at ALS Global's ("ALS") lab in Quito, or at MS Analytical ("MSA") in Cuenca, Ecuador. Analysis by ALS was done in Lima, Peru, and MSA conducted their analyses in Vancouver, Canada.

Sample preparation: Soil samples consisted of approximately one kilogram of clay from the iron-rich "B" horizon at each sample point. The soil samples were dried and subsequently screened through 80 mesh (using screens with apertures of approximately 0.18 millimetres). A 250 gram ("g") split of the material that passed through 80 mesh was pulverized to 85% passing 0.075mm and was packaged for shipment to the analytical facility.

Rock samples were jaw-crushed to 10 mesh (crushed material passes through a mesh with apertures of 2 millimetres ("mm")), from which a one-kilogram sub-sample was taken. The sub-sample was crushed to a grain size of 0.075mm and a 200g split was set aside for analysis.

Analytical procedure: A 0.5g split of the -0.075mm fraction of soil samples underwent digestion with aqua regia, and rock samples by four-acids, and the liquid was analyzed for 48 elements by ICP-MS. Samples that had lead and zinc grades of greater than 1%, and silver grades of over 100g/t underwent a second analysis in which 0.4 grams of pulp was digested in a mixture of four acids and the resulting liquid was diluted and analyzed by ICP-MS. Apart from being analyzed by ICP-MS, gold was also analyzed by fire assay with an ICP-AES finish.

QAQC: Aurania personnel inserted a certified standard pulp sample, alternating with a field blank, at approximate 20 sample intervals in all sample batches. Aurania's analysis of results from its independent QAQC samples showed the batches reported on above, lie within acceptable limits. In addition, the labs reported that the analyses had passed their internal QAQC tests.

The technical information contained in this news release has been verified and approved by Jean-Paul Pallier, MSc. Mr. Pallier is a designated EurGeol by the European Federation of Geologists and a Qualified Person as defined by National Instrument 43-101, Standards of Disclosure for Mineral Projects of the Canadian Securities Administrators.

Aurania is a junior mineral exploration company engaged in the identification, evaluation, acquisition and exploration of mineral property interests, with a focus on precious metals and copper. Its flagship asset, The Lost Cities - Cutucu Project, is located in the Jurassic Metallogenic Belt in the eastern foothills of the Andes mountain range of southeastern Ecuador.

This news release may contain forward-looking information that involves substantial known and unknown risks and uncertainties, most of which are beyond the control of Aurania. Forward-looking statements include estimates and statements that describe Aurania's future plans, objectives or goals, including words to the effect that Aurania or its management expects a stated condition or result to occur. Forward-looking statements may be identified by such terms as "believes", "anticipates", "expects", "estimates", "may", "could", "would", "will", or "plan". Since forward-looking statements are based on assumptions and address future events and conditions, by their very nature they involve inherent risks and uncertainties. Although these statements are based on information currently available to Aurania, Aurania provides no assurance that actual results will meet management's expectations. Risks, uncertainties and other factors involved with forward-looking information could cause actual events, results, performance, prospects and opportunities to differ materially from those expressed or implied by such forward-looking information. Forward looking information in this news release includes, but is not limited to, Aurania's objectives, goals or future plans, statements, exploration results, potential mineralization, the corporation's portfolio, treasury, management team and enhanced capital markets profile, the estimation of mineral resources, exploration and mine development plans, timing of the commencement of operations and estimates of market conditions. Factors that could cause actual results to differ materially from such forward-looking information include, but are not limited to, failure to identify mineral resources, failure to convert estimated mineral resources to reserves, the inability to complete a feasibility study which recommends a production decision, the preliminary nature of metallurgical test results, delays in obtaining or failures to obtain required governmental, regulatory, environmental or other project approvals, political risks, inability to fulfill the duty to accommodate indigenous peoples, uncertainties relating to the availability and costs of financing needed in the future, changes in equity markets, inflation, changes in exchange rates, fluctuations in commodity prices, delays in the development of projects, capital and operating costs varying significantly from estimates and the other risks involved in the mineral exploration and development industry, and those risks set out in Aurania's public documents filed on SEDAR. Although Aurania believes that the assumptions and factors used in preparing the forward-looking information in this news release are reasonable, undue reliance should not be placed on such information, which only applies as of the date of this news release, and no assurance can be given that such events will occur in the disclosed time frames or at all. Aurania disclaims any intention or obligation to update or revise any forward-looking information, whether as a result of new information, future events or otherwise, other than as required by law.

To view the source version of this press release, please visit https://www.newsfilecorp.com/release/47637