Eagle Mountain Gold Project has an established indicated resource of 3.9 million tonnes grading 1.49 gpt gold (188,000 ounces of contained gold) and inferred resources of 20.6 million tonnes grading 1.19 gpt gold (792,000 ounces of gold). The NI43-101 compliant geological resource does not include Salbora or any expansion drilling since 2017. Please refer to the technical report "Preliminary Economic Assessment of the Eagle Mountain Saprolite Gold Project, Guyana" dated September 12, 2014. The current exploration program is focused on expanding the Salbora to achieve a total project (including Eagle Mountain) critical mass of 600,000 to 800,000 ounces of gold in saprolite resources plus hard rock mineralization to finish its ongoing pre-feasibility study.

Yannis Tsitos, President, commented, "We are pleased with the initial geophysical results as they outline several new drill targets. In addition, drilling has expanded the Salbora discovery by approximately 200 metres to the north of previously announced high-grade drill results and is open to depth and to the south. Drilling has also determined that not all geophysical sulphide-rich IP anomalies contain gold mineralization and appear to require some structural controls as is typical for greenstone-hosted gold deposits. Work to date has significantly increased our understanding of the Salbora geological model and increased confidence in drill targeting to better intercept gold mineralization. Heavy rainfall during the last two months have limited our access to Salbora but we have now returned to drilling the southern extension targeting a potential expansion of an additional 300 to 400 metres strike length based on the defined geophysical IP anomaly."

Preliminary results from the survey are summarized as follows (see attached Figures):

The Friendly area is located 800 metres southeast of Salbora. The Company previously drill-tested saprolite immediately south of this IP target with several holes intercepting gold mineralization in silica-rich sediments and metavolcanics north of the main Eagle Mountain deposit. EMD18-011 intersected 6 metres grading 1.51 gpt Au at a depth of 13.9 metres (refer to news release dated May 17, 2018). Goldsource has made this a priority target to test based on IP anomaly and structural controls with drilling planned in H2, 2019.

The Coolie area is located directly one kilometre south of Salbora. An adit was excavated by Anaconda Mining in the 1940's at Coolie. In 2006, Omai Gold Mines channel sampled the adit with results showing several anomalous intervals including 20 metres along the strike of a quartz vein grading 21.22 gpt Au including 1 metre intervals at 20.1 gpt Au, 57.1 gpt Au, 81 gpt Au and 145 gpt Au. This is non-compliant historical data and should not be relied on except for historic purposes. Limited follow-up work since 2006 was done at Coolie with exploration efforts concentrating at the main Eagle Mountain resource. Goldsource has made this another priority target based on IP anomaly and structural controls with drilling planned in H2, 2019.

Based on the successes of this survey and using the defined Salbora geophysical signature, the survey has been expanded to the east, west and south to the Eagle Mountain deposit. The Company plans to cover with IP surveys an additional 4 square kilometres of prospective lands that is within the Eagle Mountain prospecting license.

Since initiating diamond drilling in late November 2018 at Salbora and the surrounding area, Goldsource has completed 38 diamond core holes for 6,293 metres. Analytical results for seven holes for 1,211 metres are pending. The Company currently has two operating drills on site, one in-house and one under contract with Orbit Garant Drilling Inc.

Note: All numbers rounded.
*Cutoff grade of 0.3 g/t Au.
**Vertical hole in near vertical structure to test mineralization to depth.

All geochemical analyses were completed by Actlabs Guyana Inc. in Georgetown, Guyana.

In H2, 2019 Goldsource plans to test the southern portion of Salbora, to depth at Salbora, test several geophysical anomalies as mentioned above, with developing an interpretation of favourable structural controls with gold mineralization and continue with the geophysical program to identify new targets. The Company is expanding its currently announced diamond core drill program and expects to drill an additional 4,000 to 5,000 metres until the end of the year.

The Company currently has in excess of $6 million in the bank which is sufficient for its planned exploration program over the next 12 months.

The Qualified Person under National Instrument 43-101 - Standards of Disclosure for Mineral Projects for this news release is N. Eric Fier, CPG, P.Eng, Executive Chairman and Chief Operating Officer for Goldsource, who has reviewed and approved its contents. 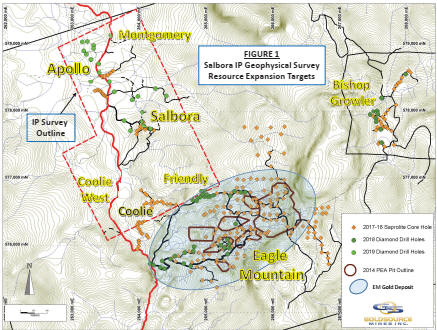 To view an enhanced version of Figure 1, please visit:
https://orders.newsfilecorp.com/files/4977/47350_gs2.jpg 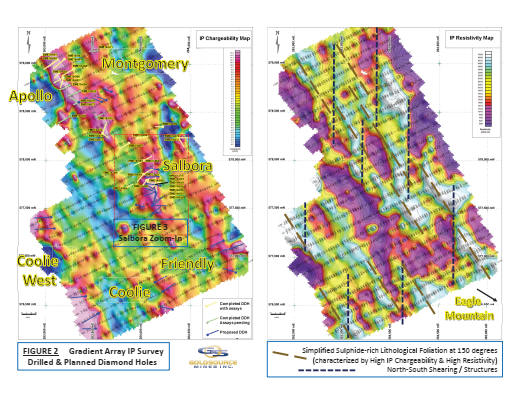 To view an enhanced version of Figure 2, please visit:
https://orders.newsfilecorp.com/files/4977/47350_gs4.jpg 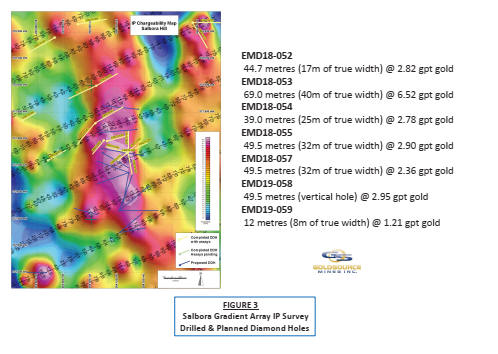 To view an enhanced version of Figure 3, please visit:
https://orders.newsfilecorp.com/files/4977/47350_gs6.jpg 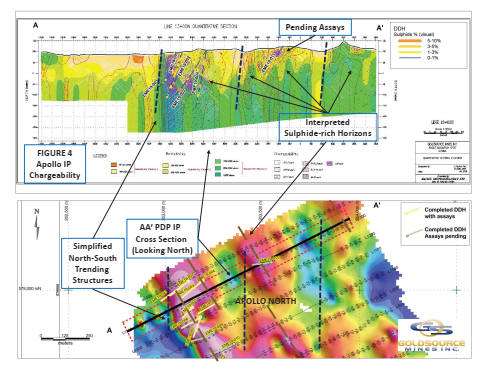 To view an enhanced version of Figure 4, please visit:
https://orders.newsfilecorp.com/files/4977/47350_gs8.jpg

This news release contains "forward-looking statements" within the meaning of Canadian securities legislation. Such forward-looking statements concern Goldsource's strategic plans, timing and expectations for the Company's exploration and drilling programs at Eagle Mountain; and information regarding high grade areas projected from sampling results and drilling results. Such forward-looking statements or information are based on a number of assumptions, which may prove to be incorrect. Assumptions have been made regarding, among other things: conditions in general economic and financial markets; accuracy of assay results and availability of mining equipment; availability of skilled labour; timing and amount of capital expenditures; performance of available laboratory and other related services; and future operating costs. The actual results could differ materially from those anticipated in these forward-looking statements as a result of the risk factors including: the timing and content of work programs; results of exploration activities and development of mineral properties; the interpretation of drilling results and other geological data; the uncertainties of resource estimations; receipt, maintenance and security of permits and mineral property titles; environmental and other regulatory risks; project costs overruns or unanticipated costs and expenses; availability of funds and general market and industry conditions. Forward-looking statements are based on the expectations and opinions of the Company's management on the date the statements are made. The assumptions used in the preparation of such statements, although considered reasonable at the time of preparation, may prove to be imprecise and, as such, readers are cautioned not to place undue reliance on these forward-looking statements, which speak only as of the date the statements were made. The Company undertakes no obligation to update or revise any forward-looking statements included in this news release if these beliefs, estimates and opinions or other circumstances should change, except as otherwise required by applicable law.

Neither TSXV nor its Regulation Services Provider (as that term is defined in policies of the TSX-V) accepts responsibility for the adequacy or accuracy of this release.

To view the source version of this press release, please visit https://www.newsfilecorp.com/release/47350

Sign up to receive news releases by email for Goldsource Mines Inc. or all companies belonging to the Mining and Metals, Precious Metals industries.