The 14,000 hectares Arrieros project was recently separated from the original 30,000 hectare Montezuma project (the remainder of which is now the subject of a Letter of Intent with BMR Group PLC - see news release dated July 29, 2019), and is available for option and joint-venture agreements with potential partners.

Arrieros is strategically located in northern Chile between the giant Chuquicamata and Centinela porphyry copper mining districts, and is characterised by a large, post-mineral, gravel-filled "pampa" basin that obscures the underlying geology. The project area is flanked by extensive hydrothermal alteration typical of porphyry copper style deposits to the west and north at Montezuma, and is itself characterised by significant, undrilled magnetic anomalies that Revelo believes are indicative of porphyry copper systems.

Arrieros lies at the heart of the Mid-Tertiary aged magmatic belt of northern Chile sometimes referred to as the Domeyko Cordillera or the West Fissure Belt. This mineral belt, stretching over some 600 kilometers north-south, is host to some of the most important copper mines and districts in the world, such as Collahuasi (Anglo American, Glencore and partners), Chuquicamata (Codelco), Centinela (Antofagasta Minerals, Marubeni Corp and partners), La Escondida (BHP, Rio Tinto and partners) and El Salvador (Codelco), amongst others. The Domeyko Cordillera copper mines are responsible for producing around 15% of world copper production, and around 56% of Chilean copper production, and include the world's largest single copper mine at La Escondida.

The Domeyko Cordillera and its associated copper mines and prospects are controlled by a series of coastal-parallel, approximately north-south oriented, faults and fault zones, which have played an intimate and intricate part in the evolution and development of the giant deposits located along the belt, including both hypogene (syn-mineral) and supergene (post-mineral) copper deposition. The overall structural belt is narrow - generally less than 100Km wide - and consequently relatively well defined. The geology is typified by uplifted blocks of Palaeozoic and Mesozoic rocks that are separated by generally Miocene-aged, gravel-filled basins that obscure the underlying geology. Mid-Tertiary aged plutonic and higher-level porphyritic rocks, which in some areas are related to the large copper-mineralised systems, intrude the older rocks in key areas along the belt.

The Arrieros property, encompassing about 14,000 Ha of 100% owned tenement, is more than 17.5 Km north-south and 7.5 Km east-west, and is located just 43 Km due south of the giant Chuquicamata copper mine and related deposits, and 37 Km northeast of the Centinela copper mining district. The property is flanked to the north and west by uplifted blocks of Paleozoic and lesser Mesozoic rocks on Revelo's contiguous Montezuma property. These uplifted blocks are intruded by porphyritic stocks related to widespread hydrothermal alteration and brecciation with porphyry copper characteristics and mineralised drill intercepts, some of which has been dated as Mid-Tertiary in age. This gives evidence to the relationship of the alteration and mineralisation with the Domeyko Cordillera porphyry copper province and the overall prospectivity of the area.

The only significant exploration campaign to date by Revelo across the Arrieros "pampa", excluding the southernmost 2.5 Km, has been the completion of a detailed ground magnetics survey. This has revealed a series of magnetic features that may be related to a Mid-Tertiary batholith and/or the hypogene porphyry copper centres that the Company is exploring for. Very limited historic exploration drilling (5 holes) is either located on the edges of the property, has failed to reach bedrock through the cover and/or has not targeted the magnetic features of interest. Other drill holes visible on satellite images in the centre of the pampa are historic water well tests that did not reach bedrock.

Revelo believes the magnetic anomalies are sourced from the bedrock sequences beneath the gravel cover, and at least in part may reflect the presence of possible Mid-Tertiary igneous intrusive rocks that may be related to the porphyry copper style of mineralisation being sought. Electrical geophysical coverage - most likely Induced Polarisation (IP) - would be able to detect the presence of any sulphide mineralisation related to these intrusive rocks, which could then be followed up by drill testing.

Arrieros is easily accessed via paved and dirt roads that extend from the nearby mining town of Calama, which supports Codelco's Chuquicamata mining district. Travel time to the northern part of the property from Calama is around 30 to 40 minutes. The property is characterised by modest topography and flat lying "pampa" areas, at altitudes of around 3,000 m.a.s.l.

For further details of the Arrieros project please refer to the relevant project page on Revelo's website (www.reveloresources.com).

Dr. Demetrius Pohl, Ph.D., Certified Professional Geoscientist (CPG), an independent consultant, is the Company's Qualified Person for the purposes of National Instrument 43-101 Standards of Disclosures for Mineral Projects of the Canadian Securities Administrators and has approved the written disclosure of the technical information contained in this news release.

Revelo has interests in an outstanding portfolio of projects prospective for copper, gold and silver located along proven mineral belts in one of the world's top mining jurisdictions - Chile. The Company has a combination of wholly owned projects (available for option, JV or sale), option agreements, royalty interests (non-producing to date), and equity interests in mining and exploration companies. Revelo's total exposure to mineral tenements in northern Chile, either wholly owned or through royalty interests, is around 200,000 hectares.

Revelo is a Canadian company and is listed on the TSX Venture Exchange (TSXV: RVL). For more information, please visit Revelo's website at www.reveloresources.com

The reader is cautioned that the mines and mining districts indicated in this news release are for geographical reference purposes only, and there is no evidence to date that a comparable mineral resource could be found at Arrieros. 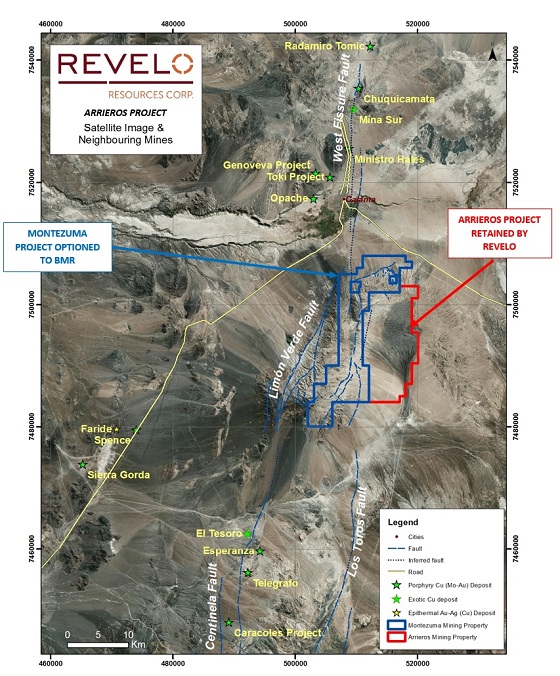 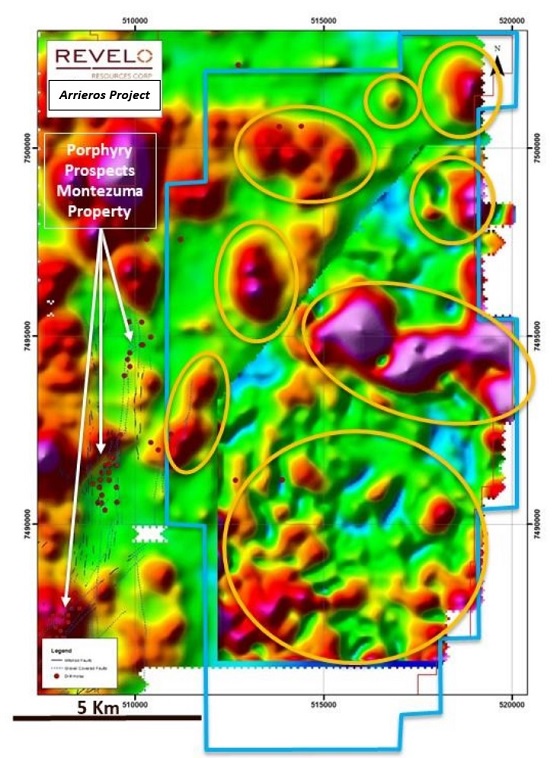 To view an enhanced version of Map 2, please visit:
https://orders.newsfilecorp.com/files/3761/46711_map2a.jpg 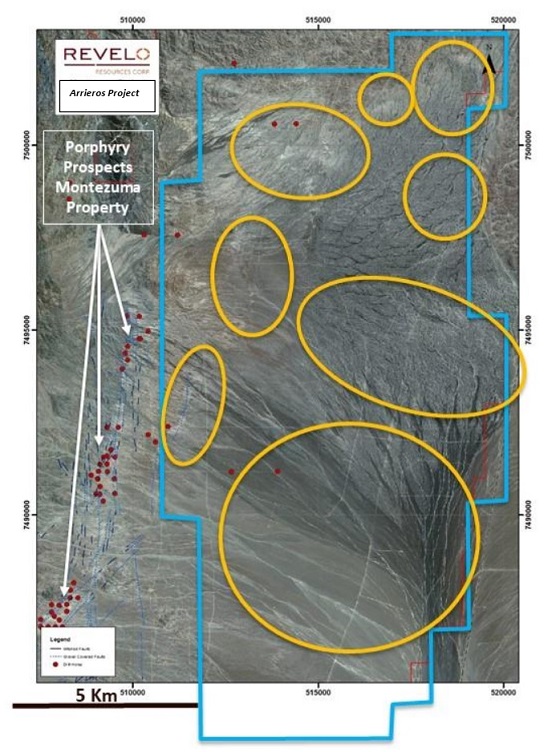 To view an enhanced version of Map 3, please visit:
https://orders.newsfilecorp.com/files/3761/46711_map3a.jpg

To view the source version of this press release, please visit https://www.newsfilecorp.com/release/46711

Sign up to receive news releases by email for Revelo Resources Corp. or all companies belonging to the Mining/Metals, Precious Metals industries.