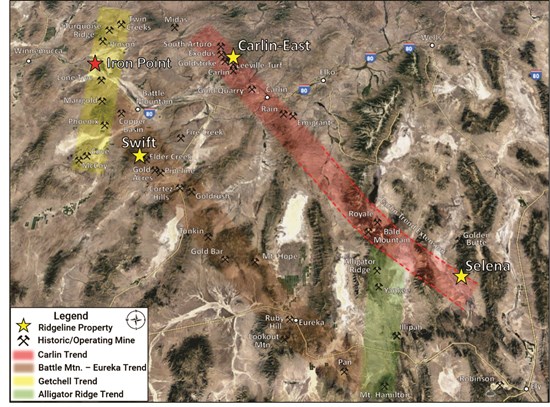 Carlin East is a 6.5 square mile underexplored core land position on the Carlin Trend that is on-trend of Newmont's Leeville-Turf (15Moz. Au) mine and adjacent to Barrick's Goldstrike (50+ Moz. Au) complex. The primary ore controlling structures of the Leeville-Turf mine extend onto the Carlin-East property and coincide with a pronounced gravity geophysics high. A conceptual Carlin-type exploration target has been defined within this structural corridor and Ridgeline is in the process of completing additional geophysics, sampling, mapping, and historic data review prior to an initial drill test of this high priority target.

Selena is a 10.0 square mile early stage Carlin-Type Au exploration project located within the proposed extension of the South-Carlin Trend. The property lies at the southern end of the Cherry Creek Range to the east of Kinross's Bald Mountain (4.0+ Moz. Au) and Alligator Ridge (1.0+ Moz. Au) mines and directly south of McEwen Mining's Golden Butte and Resurrection Ridge prospects. Ridgeline will focus on a newly identified oxide Au structural target highlighted by multiple significantly anomalous in Au grab samples. The structural target is untested by drilling and appears to widen as it cuts up-section and continues under shallow cover to the west where it is projected to intersect the Pilot Shale, a regionally important host to gold mineralization.

Chad Peters, P.Geo. (CTH and Ridgeline President & CEO) and Steve Nielsen (Director, Owner - Envirotech Drilling LLC.) founded the company in 2018 with the core belief that significant discovery potential remains in Nevada. Ridgeline's strategic partnership with Envirotech Drilling LLC. provides exposure to a highly experienced drilling team as well as significantly discounted drilling services allowing Ridgeline to focus exploration dollars into the ground early to maximize the odds of discovery. As Premier's Nevada Exploration Manager, Chad executed multiple exploration projects and joint venture initiatives with partners such Barrick, Newmont and Kinross Gold. In 2015 he led the team that re-interpreted the historic McCoy-Cove structural model and proposed a new exploration target leading to the 2016 discovery of the CSD Gap deposit. The success of the CSD Gap discovery led to a high-grade, 1.6 million-ounce resource estimate in 2017 and subsequent joint venture with Barrick Gold in 2018 on what is now considered the highest-grade undeveloped Carlin-Type deposit in Nevada.

Stated Craig Roberts, P.Eng., President & CEO of Ethos: "For a modest seed round equity investment of C$198,000, Ethos now has exposure to two additional deep Carlin-type drill targets in Nevada, with sufficient funding to drill one and possibly both this year, plus a very prospective nearer surface oxide gold target. This investment furthers our relationship with the Ridgeline technical team who have a proven track record of multiple Carlin-type discoveries in Nevada. Our involvement with Ridgeline management has already provided significant value add to our initiatives in Nevada and if Ridgeline has success in drilling its Carlin-type targets we believe our 8.0% ownership could provide significant upside to the Ethos shareholders. As an equity investment, we get this exposure without the requirement to make further cash calls, although we do have the option to at least maintain our proportional ownership through the next financing round. Including our recently announced program to drill a Carlin-type target at the Iron Point project 22 miles east of Winnemucca, Nevada (see Figure above and the Ethos May 17, 2019 press release), Ethos now has exposure to three Carlin-type targets in Nevada. Iron Point will be drilled shortly under the supervision of Dr. Quinton Hennigh, and at least one and possibly two of the Ridgeline targets will be drilled in 2019."

Jo Price, M.Sc., MBA, P.Geo, VP Exploration of the Company and a Qualified Person as defined under National Instrument 43-101 has reviewed and approved this release.

Ethos Gold is exploring the La Purisima gold project (earning 100%) in Chihuahua Mexico, the Iron Point Carlin gold project (earning 50% from Victory Metals Inc.) 22 miles east of Winnemucca, Nevada, and the Perk-Rocky copper-gold porphyry project (earning 100%), 220 km west of Williams Lake, British Columbia. La Purisima is a near surface, bulk tonnage, oxide gold target, and a maiden drill program will commence shortly. Iron Point is a Lower Plate hosted Carlin style gold target, and a planned program of three vertical holes to test this target will commence shortly under the supervision of Dr. Quinton Hennigh. Perk-Rocky is a copper-gold porphyry target, and an exploration program including detailed airborne geophysics and ground mapping and sampling will commence shortly. Ethos also owns approximately 8% of the equity of Carlin Type Holdings Ltd., a private company earning into 100% ownership of three Nevada exploration projects, including two deep Carlin type targets (Carlin East and Selena). Ethos is also earning into the Pine Pass and Ursula vanadium projects (100% earn-in) in north-central British Columbia. In March 2019 Ethos received notice from the Province of British Columbia that the mineral tenures making up its Pine Pass vanadium project are included in an area under consideration for an immediate moratorium on development proposals and possible inclusion in an expanded environmental protected area, and Ethos is now waiting on the resolution of this issue before finalizing plans for further work.

This press release contains certain "forward-looking statements" within the meaning of Canadian securities legislation. Although the Company believes that such statements are reasonable, it can give no assurance that such expectations will prove to be correct. Forward-looking statements are statements that are not historical facts; they are generally, but not always, identified by the words "expects," "plans," "anticipates," "believes," "intends," "estimates," "projects," "aims," "potential," "goal," "objective," "prospective," and similar expressions, or that events or conditions "will," "would," "may," "can," "could" or "should" occur, or are those statements, which, by their nature, refer to future events. The Company cautions that Forward-looking statements are based on the beliefs, estimates and opinions of the Company's management on the date the statements are made and they involve a number of risks and uncertainties. Consequently, there can be no assurances that such statements will prove to be accurate and actual results and future events could differ materially from those anticipated in such statements. Except to the extent required by applicable securities laws and the policies of the TSX Venture Exchange, the Company undertakes no obligation to update these forward-looking statements if management's beliefs, estimates or opinions, or other factors, should change. Factors that could cause future results to differ materially from those anticipated in these forward-looking statements include the risk of accidents and other risks associated with mineral exploration operations, the risk that the Company will encounter unanticipated geological factors, or the possibility that the Company may not be able to secure permitting and other agency or governmental clearances, necessary to carry out the Company's exploration plans, and the risk of political uncertainties and regulatory or legal changes in the jurisdictions where the Company carries on its business that might interfere with the Company's business and prospects. The reader is urged to refer to the Company's reports, publicly available through the Canadian Securities Administrators' System for Electronic Document Analysis and Retrieval (SEDAR) at www.sedar.com for a more complete discussion of such risk factors and their potential effects

To view the source version of this press release, please visit https://www.newsfilecorp.com/release/45153