Silver One Provides Update on Metallurgical Testing at Its Candelaria Mine Project, Nevada

Vancouver, British Columbia--(Newsfile Corp. - May 21, 2019) - Silver One Resources Inc. (TSXV: SVE) (OTC Pink: SLVRF) (FSE: BRK1) ("Silver One" or the "Company") is pleased to provide an update of its metallurgical testing on the historic leach pads at its Candelaria project in Nevada. New results show that up to 75% of the total silver contained in composite samples from the old leach-pads (an increase of more than 47%-79% over historic production recoveries) can potentially be recovered by reprocessing the heaps using very fine grinding in combination with microbubble technology. This testing was done at First Majestic Silver Corp.'s La Parrilla Mine laboratory in Durango, Mexico. Metallurgical work continues with ongoing efforts being focused on evaluating the economics of recovering gold and silver by either high-pressure grinding roll ("HPGR") or by very fine milling combined with microbubble technology.

Greg Crowe, President and CEO, commented; "The results of the metallurgical testing done to date at Candelaria have been encouraging. Improved and proven technologies such as HPGR grinding and microbubble techniques have made vast improvements in the recoveries and costs of silver production. Our metallurgical studies continue with the aim of working towards a comparative cost analysis in Q3 or Q4 of 2019."

At Penasco Quemado, the Company completed a short program consisting of 974 meters of diamond drilling in five holes. The goal of the program was 3-fold. First was to test the potential down-dip and along strike continuity of the silver-manganese mineralization identified in the area of the historic resource that was outlined by Silvermex Resources Ltd. in 2006 (see the Company's news release of Sept 27, 2016). Second was to investigate the source of the very high zinc and lead in soil anomalies located along strike to the southeast of the historic resource area. The third goal was to test geochemical and geophysical anomalies in the west central part of the property. Assay results indicate the mineralized silver-manganese system does extend outside the area of the historic resource. For example, manganese, zinc and lead values up to 3% Mn, 0.24% Zn and 0.09% Pb were encountered in hole 3 (located down dip from the center of the historic resource area), and holes 4 and 5, (located to the southeast of the same resource area) along an area of strong zinc and lead in soil anomalies. The limited drilling program was not enough to fully test all the areas of interest.

Greg Crowe, President and CEO, further commented; "The drilling at Peñasco Quemado illustrates that the mineralized silver-manganese system extends beyond the area of the historic resource. Also, low to moderate zinc and lead values were encountered in drill holes to the southeast of the historic drill area. However, the limited drill program was not sufficient to fully test all anomalous areas."

Highlights of the metallurgical testing at Candelaria include the following:

Relevant results including cyanide leaching recoveries via heap leach, agitated leaching and microbubbles are summarized in the following table:

An extensive and ongoing metallurgical program, testing 3 different silver recovery processes, has been underway since mid-2018. Work to date has been conducted in three separate laboratories on samples obtained from the Company's sonic drilling completed in late 2017- early 2018.

All composites increased silver recovery with decreasing feed size. Cyanide consumptions were low varying from 0.2 to 1.5 kg of cyanide per metric ton of ore. Ammonium Thiosulfate ("ATS") gold-silver recoveries were similar to the recoveries by cyanidation.

Column test silver and gold recoveries of a sample of the stockpiles were 29.6% and 50% respectively in 80 days of leaching. The sample was tested at 37mm feed size. 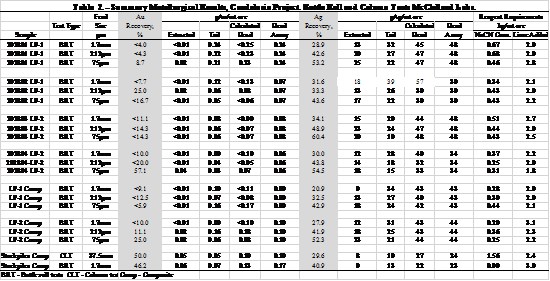 The second set of tests were conducted at Kappes Cassiday Laboratories in Reno, Nevada . Column HPGR-heap-leach tests were completed on composite samples for each of the leach pads LP1 and LP2. Results show that at the 10-mesh feed size (1.7mm), silver and gold recoveries in 120 days of leaching were 35% and 23% respectively (for LP2 composite). Silver and gold recoveries for LP1 composite, at the same feed size, were 26% and 17% respectively. Results of tests conducted at KCA are shown in table 3.

The HPGR results reported for LP2 at the 10-mesh crush size, illustrate the potential to increase silver recoveries by 14%, from 30.6% with conventional grinding to 35% with HPGR. These results are promising as the costs of operation for HPGR crushing are estimated to be significantly lower than traditional crushing.

The third type of testing was undertaken at First Majestic's La Parrilla Mine laboratory (non-certified) in Durango, Mexico. Fine grinding and agitated leaching as well as fine grinding and agitated leaching with microbubble tests were completed. The highest silver recoveries (75%) were achieved using microbubbles at feed sizes at or below 500 mesh (0.025mm). A mineralogical examination of the material suggests the very fine grinding liberates a significant amount of silver previously considered refractory. This silver was not recovered in historic production or in the metallurgical testing done on the coarser material.

Historic silver recoveries at Candelaria, until the mine ceased operations in 1999, ranged from 42% to 51% of the total silver through the heap leaching of ores crushed at 1 inch. New results show that up to 75% of the total silver in the leach pads can be recovered by fine-milling and processing by agitated leaching scenarios.

Drill holes PQ19-2 and PQ19-3 in the eastern part of the property targeted the southwest, down-dip extension of the drill-defined historic silver resource area, interpreted as a shallow, southwest-dipping replacement manto. This anomaly was outlined by geophysics. Drill hole PQ19-3 located 400 meters down dip from the PQ pit at the resource area, intersected 13 meters of anomalous values of Mn, Zn and Pb (up to 0.13%, 0.15%, and 882 ppm respectively) in a volcanic succession at the base of a red conglomerate. Hole PQ19-2, located 500 meters down dip from the resource area reached the gneissic basement without intersecting mineralization of interest.

Hole PQ19-1 in the western part of the property, tested strong zinc, lead and copper soil anomalies with coincidental geophysical anomalies in an area drilled by Silvermex in 2008. Here, significant silver values were intersected by Silvermex in hole PQRC51 (340g/t Ag over 4.5m, 88 meters from surface). The goal of Silver One's hole PQ19-1 was to intersect the continuity of the silver mineralization in the footwall of a felsic dyke 40 meters below the intersection of hole PQRC51. Hole PQ19-1 was drilled to a depth of 320.25 meters without exiting the dyke and therefore did not reach the target. Drill hole collar coordinates and map showing locations are in table 4 and figure 1.

The drilling was conducted in HQ size. Core recoveries were generally good averaging between 96% to 99% in all holes, except drill hole PQ19-2, adjacent to a fault zone, which recovered an average of 81% of the core. The core was logged, photographed and sampled by Silver One personnel at a core facility located in Saric, Sonora 20 km from the project area. Sampling procedure involves splitting the core in half with a diamond core saw; one half is bagged and tagged for assay, and the other half is returned to the core box for storage.

Silver One follows a systematic and rigorous QA/QC program overseen by Greg Crowe, President & CEO and a Director of Silver One. The Company's personnel oversee chain of custody and inserts certified standards, duplicates and blanks in the sample stream of all samples submitted to the laboratory. All samples collected were dried and split by Bureau Veritas, Labs. in Hermosillo Sonora. Gold was assayed in its Hermosillo lab (assay code FA430) using 30-gram sample, while silver and multi-element analysis (ICP_ES/MS assay code AQ270) were conducted in Vancouver.

*Intercepts reported are near true width. 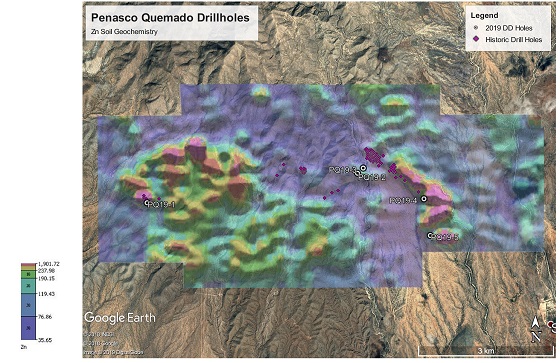 To view an enhanced version of Figure 1, please visit:
https://orders.newsfilecorp.com/files/4730/44888_figure1.jpg

The technical content of this news release has been reviewed and approved by Greg Crowe, P. Geo, President and CEO of Silver One, and a Qualified Person as defined by National Instrument 43-101.

Silver One is focused on the exploration and development of quality silver projects. The Company holds an option to acquire a 100%-interest in its flagship project, the past-producing Candelaria Mine located in Nevada. The Company is currently conducting metallurgical tests to determine the best methods for and potential recoveries of silver from the historic leach pads. Additional opportunities lie in previously identified high-grade silver intercepts down-dip and potentially increasing the substantive silver mineralization along-strike from the two past-producing open pits.

The Company has staked 636 lode claims and entered into a Lease/Purchase Agreement to acquire five patented claims on its Cherokee project located in Lincoln County, Nevada, host to multiple silver-copper-gold vein systems, traced to date for over 11 km along-strike.

Information set forth in this news release contains forward-looking statements that are based on assumptions as of the date of this news release. These statements reflect management's current estimates, beliefs, intentions and expectations. They are not guarantees of future performance. Silver One cautions that all forward-looking statements are inherently uncertain, and that actual performance may be affected by a number of material factors, many of which are beyond Silver One's control. Such factors include, among other things: risks and uncertainties relating to Silver One's limited operating history, ability to obtain sufficient financing to carry out its exploration and development objectives on the Candelaria Project, obtaining the necessary permits to carry out its activities and the need to comply with environmental and governmental regulations. Accordingly, actual and future events, conditions and results may differ materially from the estimates, beliefs, intentions and expectations expressed or implied in the forward-looking information. Except as required under applicable securities legislation, Silver One undertakes no obligation to publicly update or revise forward-looking information.

To view the source version of this press release, please visit https://www.newsfilecorp.com/release/44888

Sign up to receive news releases by email for Silver One Resources Inc. or all companies belonging to the Mining/Metals, Precious Metals industries.