The RAISE at the PDAC: 1X1 Small-Cap Resource Conference was an exclusive event for investors and finance individuals who invest in resource stocks to meet one-on-one with companies throughout the day in a series of meetings and presentations. American Creek met with a steady flow of high net worth individuals, brokers, and fund managers throughout the day.

The Red Cloud 2019 Pre-PDAC Mining Showcase was a sold-out event with some 500 investors attending the conference where American Creek had a booth and also did a "Dragons Den" style presentation to a panel of important industry financial representatives. Red Cloud is a big supporter of exploration companies operating in the Golden Triangle region of BC and American Creek has had recent discussions with Red Cloud management regarding working together going forward. 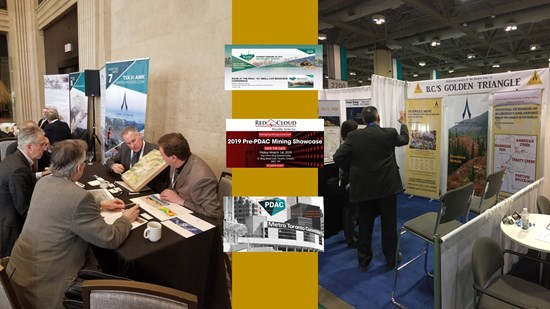 Darren Blaney and Kelvin Burton of American Creek Resources at various conferenced in Toronto
To view an enhanced version of this graphic, please visit:
https://orders.newsfilecorp.com/files/682/43357_742a7d7cb4e10bc0_001full.jpg
The PDAC conference had over 25,000 people attend even though they charged daily admission for the first time. American Creek had a very busy booth and was also invited to give a corporate presentation at the conference.

There were two noticeable differences observed by Company representatives at the PDAC conference this year. One was a palpable excitement in general for precious metals, more particularly gold and silver. The overall sentiment amongst "the experts" giving presentations and the investors we interacted with was one of optimism and expectations for a rise in both gold and silver prices as the year progresses.

The second, and of particular significance to American Creek, was the impressive amount of exposure and recognition that B.C.'s Golden Triangle has achieved. Exploration in that region now equals the rest of the province put together. The experts, analysts and letter writers were all talking about it, and most people who we interacted with knew about or were planning to invest in Golden Triangle companies and projects. It appears that a new Golden Triangle "gold rush" may be in the making. As American Creek has operated in the Golden Triangle region for almost 15 years and has three noteworthy projects there, we are well positioned to benefit from this building excitement.

Having the Treaty Creek JV property with a fully carried interest next to the Brucejack/Valley of Kings (VOK) mine (Pretivm) and the largest undeveloped gold deposit in the world by reserves (Seabridge) with similar geology, geophysics and structure positions American Creek for potential significant growth.

Investors were impressed with and excited about Ken Konkin (former head geologist for Pretivm and instrumental in the discovery and development of the Brucejack / VOK mine) now heading our JV partner Tudor Gold's geological team to develop Treaty Creek. Many shareholders were able to talk with Mr. Konkin at the PDAC conference. In discussions with Mr. Konkin, the three items concerning the Treaty Creek project that he is most excited about are:

Investors were also excited to learn that American Creek owns 100% of the former operating high-grade Dunwell mine located just 8km from the shipping port in Stewart, B.C., with highway and power lines running through it. The Bear River valley is quickly becoming a hotbed of activity including many recent mergers and acquisitions and our Dunwell property has the richest historical grades and production in the valley. There is also now an opportunity to provide a nearby soon to open mine with mill feed from the Dunwell. In addition to investor interest, we presently have serious interest in the project from several different companies. American Creek is planning on commencing drilling at the Dunwell project within the next 90 days. The objective of that program will be to confirm that under the old workings there are additional significant high-grade extensions of the previously mined gold/silver ore body.

As mentioned in our previous release, American Creek granted Tudor an additional extension for the previously announced option to buy out the Corporation's 40% interest in the Electrum Project Joint Venture located near Stewart, British Columbia. Tudor paid American Creek a non-refundable payment of $50,000 upon entering the original agreement. If the option is exercised by Tudor, a further payment of $2,650,000 will be made to American Creek on or before April 15, 2019.

The combination of American Creek working on the Dunwell while its JV partner develops Treaty Creek, and either receiving an additional $2,650,00 or retaining 40% of the Electrum property puts American Creek in one of the strongest positions in the Golden Triangle, which didn't go unrecognized by both analysts and investors alike.

Gold Hill Project Update
The 100% owned Gold Hill project is located in the Boulder Creek drainage, a tributary of the Wildhorse River east of Fort Steele, British Columbia and is a potential source of the downstream placer gold responsible for Canada's 4th largest gold rush.

A preliminary drill program consisting of approximately 2,000 meters of drilling in four holes on two sections was recently concluded on the property. The objective of the program was to get our first initial look at underground geological structure as prior to this time, no drilling had ever been conducted on the property. Information from this preliminary program will be utilized to model and plan future exploration on a wider scale. Assay results are pending.

Three of those properties are located in the prolific "Golden Triangle"; the Treaty Creek and Electrum joint venture projects with Tudor Gold (Walter Storm) as well as the 100% owned past producing Dunwell Mine. The Corporation also holds the Gold Hill, Austruck-Bonanza, Ample Goldmax, Silver Side, and Glitter King properties located in other prospective areas of the province.

Cautionary Statements regarding Forward-Looking Information
Certain statements contained in this press release constitute forward-looking information. These statements relate to future events or future performance. The use of any of the words "could", "intend", "expect", "believe", "will", "projected", "estimated" and similar expressions and statements relating to matters that are not historical facts are intended to identify forward-looking information and are based on the Company's current belief or assumptions as to the outcome and timing of such future events. Actual future results may differ materially.
All statements including, without limitation, statements relating to the properties as well as any other future plans, objectives or expectations of the Company are forward-looking statements that involve various risks and uncertainties. There can be no assurance that such statements will prove to be accurate and actual results and future events could differ materially from those anticipated in such statements. Important factors that could cause actual results to differ materially from the Company's plans or expectations include risks relating to the actual results of current exploration activities, fluctuating gold prices, possibility of equipment breakdowns and delays, exploration cost overruns, availability of capital and financing, general economic, market or business conditions, regulatory changes, timeliness of government or regulatory approvals and other risks detailed herein and from time to time in the filings made by the Company with securities regulators. The Company expressly disclaims any intention or obligation to update or revise any forward-looking statements whether as a result of new information, future events or otherwise except as otherwise required by applicable securities legislation.

To view the source version of this press release, please visit https://www.newsfilecorp.com/release/43357