Two exploratory drill fences were completed 150 metres and 400 metres west of the current DHZ drilling, along the D2 fold axis that is interpreted to be a significant gold control, using the recently added second drill rig as shown on Figure 1. All 5 of 5 drill holes intersected gold mineralization. Highlights include:

Table 1: Results of reconnaissance drilling to the west of the Hinge Zone. All widths are drill indicated core length and insufficient data exists to determine true widths and vein orientations at this time.

Additional drilling has also been completed within the Hinge Zone, results of which have not been received at the time of this release. DHZ drill results will be released once assay results are received and processed.

Chris Taylor, President and CEO of Great Bear said, "In a district where 25 metre step-out drilling is considered aggressive, our new reconnaissance drill holes located 150 metres and 400 metres from the Hinge Zone have yet again shown the extensive footprint of gold mineralization at Dixie, and the apparent importance of major D2 fold axes as regional gold controls. We look forward to further drilling in these areas to determine if these are separate new gold discoveries, or whether the Hinge Zone extends through this entire strike length."

The Company notes that gold-bearing veins have now been drilled over a strike length of approximately 500 metres from the easternmost Hinge Zone drill holes to the newest drilling to the west. This veining is located on the south side of an ultramafic body and fault that are sub-parallel to the regional D2 fold axis. 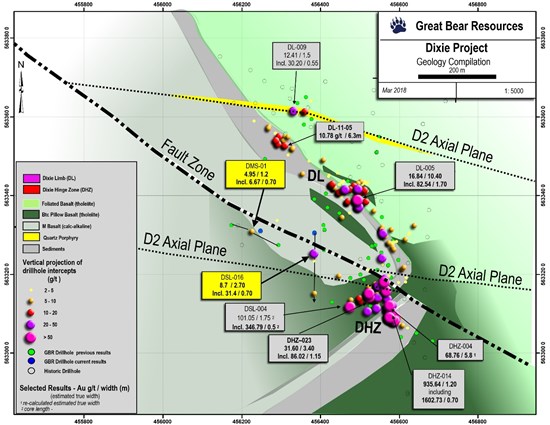 The Company also notes that the next interpreted D2 fold axis to the north, also shown on Figure 1, also hosts high grade gold within a quartz feldspar porphyry dike, including 30.20 g/t gold over 0.55 metres, within a wider interval of 12.41 g/t gold over 1.5 metres in hole DL-009, which was drilled by the Company in late 2017. This second fold axis is also an exploration target for future step-out drilling. 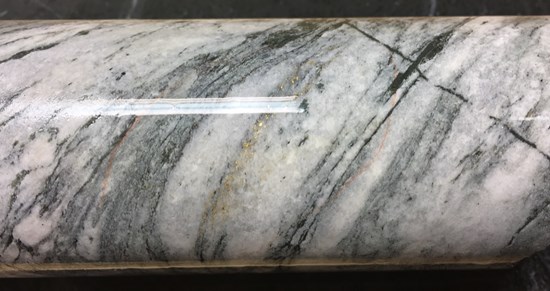 Great Bear is currently undertaking a fully-funded 30,000 metre, approximately 150 drill hole program that is expected to continue through 2019. A second drill rig was added to the project in February 2019 to accelerate this work and is now drilling additional gold targets.

Chris Taylor continued, "Following our recent drill success at Dixie, the total staked area within the Red Lake district increased by over 150%, constituting the area's largest staking rush in decades. We have completed a model-driven geological review of the district using the Dixie property's D2 fold and deep-seated structural gold controls as guides. This work suggests additional prospective areas for gold mineralization, which we have now secured, royalty free. We intend to prospect the new properties in summer 2019."

Figure 3: Map of newly acquired and optioned properties in the Red Lake district. 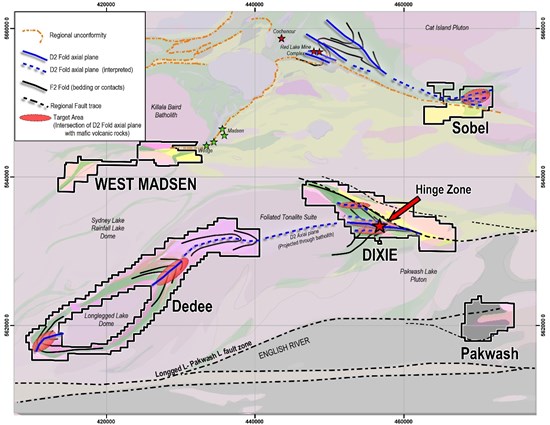 Great Bear has not completed sufficient work on the new properties to verify results from historical work.

Highlights of the Dedee property include:

(b) 15,000 shares after receiving acceptance of the Exchange for the issuance of the shares under this agreement;

The 3,100-hectare (31 square kilometre) Pakwash property is located southeast of the Dixie property and covers portions a major regional fault structure lying along English River sediments. Historical work has identified gold lake sediment anomalies which are coincident with regional fault zones and gold-in-soil (MMI) anomalies which have not been followed up with detailed exploration.

(b) 25,000 shares within seven (7) business days of receiving acceptance of the Exchange for the issuance of the shares under this agreement;

The 3,200-hectare (32 square kilometre) Sobel property, is located along the strike extension of the main D2 fold axial plane that is a major interpreted control of gold mineralization at the Red Lake Gold Mine, operated by Goldcorp.

(b) 30,000 shares within seven (7) business days of receiving acceptance of the Exchange for the issuance of the shares under this Agreement;

The Company has elected to buy out all the outstanding royalties on the newly optioned properties for total consideration of 38,500 shares of Great Bear.

The schedule of optional payments for all of the optioned properties can be accelerated at any time at the Company's discretion in order to achieve full ownership at an earlier date. The options may also be terminated at any time subsequent to the initial cash and share payment.

Great Bear's flagship Dixie property is located approximately 15 minutes' drive along Highway 105 from downtown Red Lake, Ontario. The Red Lake mining district has produced over 30,000,000 ounces of gold and is one of the premier mining districts in Canada, benefitting from major active mining operations including the Red Lake Gold Mine of Goldcorp Inc., plus modern infrastructure and a skilled workforce. The Dixie property covers a drill and geophysically defined 10-kilometre gold mineralized structure similar to that hosting other producing gold mines in the district. In addition, Great Bear is also earning a 100% royalty-free interest in the West Madsen, Pakwash, Dedee and Sobel properties, which cover regionally significant gold-controlling structures and prospective geology. All of Great Bear's Red Lake projects are accessible year-round through existing roads.

Drill core is logged and sampled in a secure core storage facility located in Red Lake Ontario. Core samples from the program are cut in half, using a diamond cutting saw, and are sent to SGS Canada Inc. in Red Lake, Ontario, and Activation Laboratories in Ancaster Ontario, both of which are accredited mineral analysis laboratories, for analysis. All samples are analysed for gold using standard Fire Assay-AA techniques. Samples returning over 3.0 g/t gold are analysed utilizing standard Fire Assay-Gravimetric methods. Selected samples with visible gold are also analyzed with a standard 1kg metallic screen fire assay. Certified gold reference standards, blanks and field duplicates are routinely inserted into the sample stream, as part of Great Bear's quality control/quality assurance program (QAQC). No QAQC issues were noted with the results reported herein.

Mr. R. Bob Singh, P.Geo, Director and VP Exploration, and Ms. Andrea Diakow P.Geo, Exploration Manager for Great Bear are the Qualified Persons as defined by National Instrument 43-101 responsible for the accuracy of technical information contained in this news release.


This new release may contain forward-looking statements. These statements are based on current expectations and assumptions that are subject to risks and uncertainties. Actual results could differ materially because of factors discussed in the management discussion and analysis section of our interim and most recent annual financial statement or other reports and filings with the TSX Venture Exchange and applicable Canadian securities regulations. We do not assume any obligation to update any forward-looking statements.

To view the source version of this press release, please visit https://www.newsfilecorp.com/release/43327

Sign up to receive news releases by email for Great Bear Resources Ltd. or all companies belonging to the Mining and Metals, Precious Metals industries.