The Cantech Letter Awards recognize excellence in Canada's innovation sectors, presenting hardware in multiple categories that are voted on by sell side analysts from Canadian investment banks. Scores of analysts from nearly two dozen firms vote for the best and brightest lights in Canada's capital markets.

2018 Canadian Cannabis Stock of the Year

ABOUT THE CANTECH INVESTMENT CONFERENCE

Entering its sixth year, the Cantech Investment Conference is where Canada's next great technology companies meet the investment community. The conference, brought to you by Cantech Letter and Cambridge House International, attracts public market investors, VCs, angel investors and media to the Metro Toronto Convention Centre for a two-day exhibit and presentation. This year's conference takes place January 29-30. For more information on the conference please visit the following link: CantechConf.com. 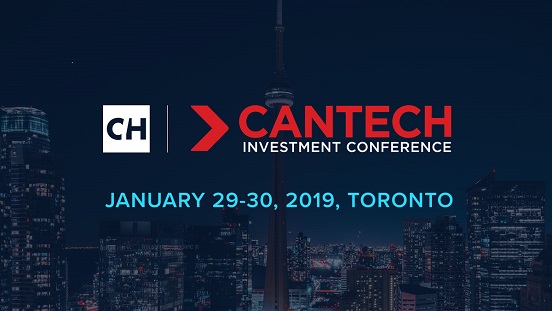 To view an enhanced version of this graphic, please visit:
https://orders.newsfilecorp.com/files/6193/42239_cantech-teaser-intro.jpg

Cambridge House International has grown to be the undisputed leader in technology and mining investment conferences, building flagship, must-attend events for over 25 years. Cambridge House events provide industries with the platform for networking, education and investment discovery.

Founded in 2008 by Nick Waddell, Cantech Letter is an online magazine focusing on Canadian technology. The site has grown into one of the most referenced financial sites in Canada.

Sign up to receive news releases by email for Cambridge House International or all companies belonging to the industry.