Vancouver, British Columbia--(Newsfile Corp. - December 18, 2018) - Pacific Empire Minerals Corp. (TSXV: PEMC) (OTCQB: PEMSF) ("Pacific Empire", "PEMC" or the "Company"), a hybrid prospect generator focused in British Columbia, is pleased to announce it has entered into an option agreement with a group of vendors and subsequently consolidated a significant land position of over 90 square kilometers in the Babine Copper-Gold Porphyry district in central British Columbia. The amalgamated "Paragon Project" combines the Company's Wasp Property, the recently optioned "Nilkitkwa Property", and prospective ground staked by the Company.

About the Paragon Project

The 9,099 hectare Paragon Project covers four copper ± gold prospects in central British Columbia and is within 30 km of three copper-gold porphyry deposits, including the past-producing Bell and Granisle Mines and the advanced Morrison copper-gold porphyry deposit. These deposits are genetically and spatially associated with Biotite Feldspar Porphyry ("BFP") dikes. PEMC is targeting analogous geology at the various prospects situated within the Paragon Property boundary. Results from due diligence rock sampling program at the Nilkitkwa Property are summarized below.

The four copper ± gold prospects consist of the Rebinsky, HOL, Wasp, and Big Joe prospects. The Rebinsky prospects, which are the focus of the ground within the option agreement, cover multiple sulphide showings that were recently uncovered during ongoing logging activities. In the northern portion of the Nilkitkwa Property, extensive quartz-sericite-pyrite +/- magnetite alteration exists proximal to a covered magnetic anomaly. In the southern portion of the property, copper mineralization is found in a recently exposed rock quarry where it consists of localized chalcocite coating chalcopyrite and pyrite grains which are disseminated and filling fractures in chlorite-carbonate altered andesitic volcanics.

At the HOL prospect, a 1,500 m x 600 m copper-molybdenum soil anomaly is coincident with a strong IP chargeability anomaly immediately adjacent to a major northwest trending fault. Historical drilling at the southeastern margin of this area encountered copper mineralization associated with BFP dikes, though assay results were not reported. Historical drilling at the Wasp prospect encountered anomalous copper as disseminated and fracture filling pyrite-chalcopyrite associated with BFP dikes. The Big Joe prospect consists of two historical trenches over 1 km apart where copper as chalcopyrite +/- bornite was encountered and found to be associated with northwest trending structures.

The Paragon Project is ideally suited for PEMC's reverse circulation drill and the Company will be developing and refining targets for intended drill testing in 2019.

Details with respect to the consideration payable for the acquisition of 6 claims totaling 630 hectares are as follows:

This property acquisition remains subject to approval of the TSX Venture Exchange. Any securities issued as consideration under this option agreement will be subject to a statutory hold period of four months and one day from the date of issuance. 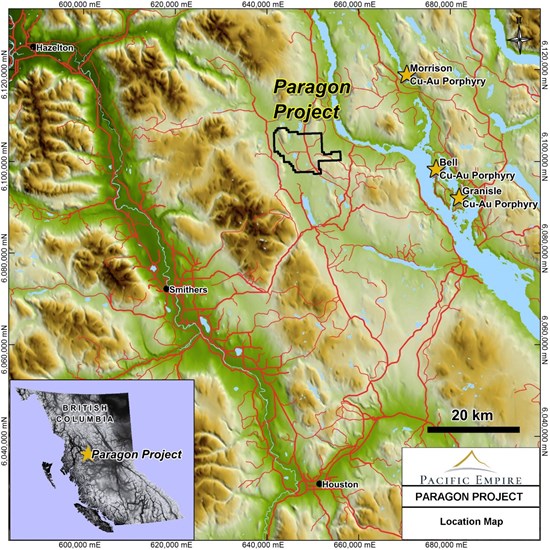 About the Babine Copper-Gold Porphyry District

The most significant deposits and occurrences in the Babine Lake area are temporally and spatially related to Eocene (50 Ma) Babine intrusions. These host more than a dozen deposits and occurrences in addition to the past producing Bell and Granisle open-pit mines which processed 130 million tonnes with average recovered grades of 0.40% copper and 0.15% gold between 1966 and 1992.

Babine intrusions occur as small stocks, plugs and dike swarms emplaced along northwest-trending regional faults developed in arc-derived Mesozoic volcanic and sedimentary assemblages. The dominant hostrock for copper-gold mineralization is a distinctive, fine- to medium-grained, crowded biotite feldspar porphyry (BFP) of granodiorite composition. Copper-gold mineralization occurs as chalcopyrite and bornite within narrow quartz-filled fractures and stockworks and as disseminations within and marginal to BFP intrusions.

Although most of the known porphyry deposits and occurrences were found by basic prospecting and stream sediment geochemistry, subsequent exploration in the Babine area has been hampered by extensive glacial overburden cover.

Pacific Empire's President, Brad Peters, added: "We are excited to continue building our portfolio through a combination of staking and strategic option agreements. The Paragon Project is a good example of the type of projects PEMC intends to pursue moving forward and we look forward to advancing the project in 2019."

Rock samples were collected from outcrop placed in polyethylene sample bags before being sealed and subsequently shipped to MS Analytical in Langley, BC.

Rory Ritchie, P.Geo., Vice President of Exploration for the Company, serves as a qualified person as defined by National Instrument 43-101 and has reviewed the scientific and technical information in this news release, approving the disclosure herein.

By integrating the project generator business model with low-cost reverse circulation drilling, the company intends to leverage its portfolio by identifying, and focusing on, the highest quality projects for partnerships and advancement.

Sign up to receive news releases by email for Pacific Empire Minerals Corp. or all companies belonging to the Mining/Metals, Precious Metals industries.