Winnipeg, Manitoba--(Newsfile Corp. - November 1, 2018) - Gossan Resources Limited (TSXV: GSS) (FSE: GSR) has completed a detailed gravity survey over its highly prospective Sturgeon Lake East polymetallic VMS property in order to help delineate those areas with the greatest concentration of massive sulphides. The gravity survey was carried out in response to very encouraging results from a 4-hole drill program completed earlier in the year, which encountered wide intercepts of strongly altered rocks, and stringer, semi-massive and massive sulphides with anomalous copper and zinc values up to 0.46% Zn. The hydrothermal alterations encountered in the drill holes are similar to those at the Lyon Lake and Sturgeon Lake deposits, and along with ongoing geochemical studies indicate the area is highly prospective for economic VMS type deposits in two main target areas (A and D).

The gravity survey, conducted by MWH Geo-Surveys, defines several areas of high density rocks which are coincident with the previously defined VTEM, magnetic, and geochemical (Zn-Ag-Au) anomalies. The coincidence of the gravity anomalies with these previous surveys, known sulphide mineralization and favourable host rock geology, strongly suggests the presence of massive sulphide bodies.

The attached map shows the location and intensity of the gravity anomalies, along with Gossan's 4 drill holes (red numbered holes), and the VTEM-geochem-gravity target areas A and D. In spite of the abundance of sulphides and alterations encountered in the first 4 holes, they clearly missed the main mass of possible sulphide material in all cases. A winter drill program of about 15 drill holes has been recommended to focus on the main target areas A and D as per attached map (yellow dashed holes).

The geology and alteration encountered during the 2018 winter drill program appears similar to that of the nearby historic Lyon Lake, Sturgeon Lake, Creek and Sub-Creek deposits. Each of the two drill holes (SLG-18-01A, SLG-18-04) was collared within a wide zone of alteration and sulphide mineralization, and require step-back drilling to test the full width of the zone, as well as along strike and deeper drilling to test the extent of the two target areas. The potential of these areas is reinforced by the current gravity survey. Drill holes 18-2 an 18-3 intersected a third target area with significant widths of intercalated sulphidic and graphitic tuffs with abundant pyrrhotite and anomalous zinc mineralization up to 0.29%. This third area also requires additional drilling to test an associated strong gravity anomaly, which was missed by holes 2 and 3.

Gossan management is strongly encouraged by the results of exploration carried out on their Sturgeon Lake property to date. 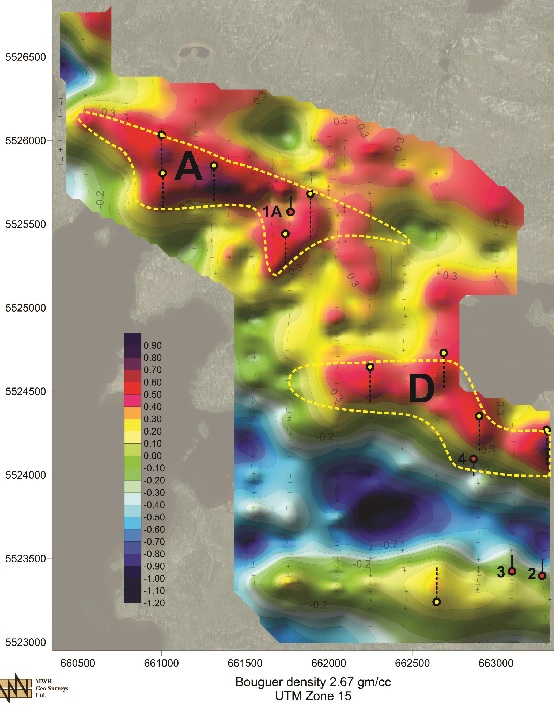 To view an enhanced version of Figure 1, please visit:
https://orders.newsfilecorp.com/files/2380/40789_gossan_enhanced2.jpg

Gossan's Sturgeon Lake Property, located in northwestern Ontario, lies directly along strike and to the east of six historic VMS deposits. Four distinct high-priority, multi-parameter volcanogenic massive sulphide (VMS) target areas have been identified on the property. Management believes its Sturgeon property has the potential to host a significant zinc-copper-silver-rich VMS deposit, similar to those mined from 1970 to 1991 in the Sturgeon Lake base-metal camp which accounted for approximately 18.7 million tonnes of ore, with average grades of 8.0% zinc, 1.1% copper, 0.8% lead, 120 g/t silver and 0.5 g/t gold (Franklin et al - 1995).

To view an enhanced version of Figure 2, please visit:
http://www.gossan.ca/projects/pdf/SturgeonLakeRegionalGeology.pdf

Gossan would like to thank the Northern Ontario Heritage Fund and the Junior Exploration Assistance Program, administered by the Ontario Prospectors Association, for a funding rebate of $100,000 in support of Gossan's Winter 2018 Sturgeon Lake Drill Program.

On November 9 & 10, 2018, Gossan will again have a Booth (#8) at the Edellmetall Precious Metals & Commodities Show held in Munich, Germany at the MVG Museum.

Gossan Resources Limited has a broadly diversified portfolio of multi-element properties prospective for hosting gold, platinum group elements and base metals, as well as specialty "green-battery metals", vanadium, titanium, tantalum, lithium and chromium. Gossan also has a large deposit of high-purity, magnesium-rich dolomite, and holds a $100,000-per-annum advance and production royalty interest in a frac sand deposit. All of Gossan's mineral exploration and development properties are located in Manitoba and Northwestern Ontario. The Company's main focus is the exploration of its zinc-rich polymetallic Sturgeon Lake Property, located in the Sturgeon Lake Greenstone Belt of Northwestern Ontario. The Company trades on the TSX Venture and the Frankfurt/Freiverkehr &Xetra Exchanges and currently has 33,630,400 common shares outstanding.

Sign up to receive news releases by email for Gossan Resources Limited or all companies belonging to the Mining/Metals industry.