The closing ceremony of the 2022 G20 Bali Summit climaxed with the host country Indonesia introducing its future capital Nusantara in a virtual metaverse.

Jakarta, Indonesia--(Newsfile Corp. - November 22, 2022) - On November 16, 2022, the 17th summit of G20 concluded in Bali, Indonesia. At the summit, Indonesia introduced its future capital Nusantara to the world in a way that no one anticipated - for the first time in history, via metaverse and avatars. Jagat, the application that made the virtual capital Nusantara possible, soon became the center of attention. 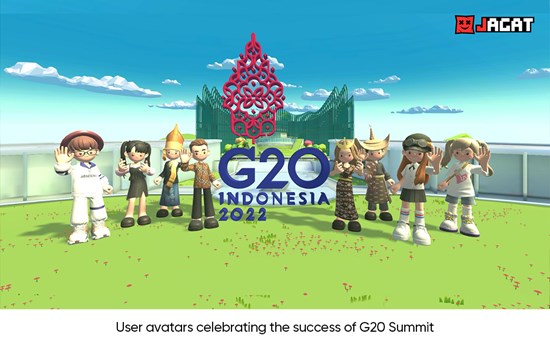 Introducing Nusantara to the world is an important segment of the G20 Bali Summit as the host country Indonesia aims to present its goal of developing digital technologies and fulfilling political visions. Using the virtual Jagat avatar, the leader of Indonesia made his speech to all G20 members and took their avatars on a tour through Nusantara to explore Indonesia's future capital.

Jagat is a metaverse-based social platform dedicated to providing users with an extremely immersive and interactive social experience. With almost everything in Jagat being customizable, it strives to create an independent and interactive world that is created and owned by users and where users can easily make friends, throw parties, go to concerts, play games and even become part of the economic system.

Being the first social platform to have ever partnered with a real city, Jagat is eye-catching in every way. The virtual Nusantara will synchronize with the real Nusantara in multiple aspects, such as city planning, architectural composition, region division and city governance. Every company that plans to have its place in the real capital will also have its place in the virtual one. Many of Indonesia's leading companies and communities in the tech, education and lifestyle industries attended the previous Jagat launch event, and they will certainly be building the future capital Nusantara with all Jagat users.

"This is a strategic opportunity to showcase the potential of the metaverse and web 3.0 industry to the global stage. Our presence showcases a real use case, supported by integration with the real economy," said Barry Beagen, Co-Founder and CEO of Jagat.

Leaders of Indonesia have openly expressed their support towards such a use case. In his welcoming remark of Jagat's launch, Joko Widodo, President of Indonesia said, "The young generations of Indonesia need to unite to shape the future of our country's digital and real economies. Let's build Nusantara together through innovation and creativity," expressing a call to action for citizens and world leaders to take part in building the city.

According to Beagen, what differentiates Jagat from other metaverse platforms out there on the market is its ability to connect the virtual city with the real one. He believes that metaverse and Web3 will have a bright future in Indonesia. With blockchain technologies, productive young people and digital technology nerds will be able to make the best of their potential and bring vitality to the world of Jagat.

"Of course, nothing can replace real world interactions, but with the help of 3D avatars, we will be able to empathize with each other while we work and interact remotely. That, for a vast archipelago country like Indonesia, is an ideal option. In Jagat's new creator ecosystem, everyone can create a new world, create their own works, and connect with their friends," added Beagen.

Jagat strives to provide users with an affordable and accessible Web3 experience. To achieve that goal, Jagat has been working with the world famous technology provider Advance Intelligence Group and has adopted a mobile-first strategy to allow even the most basic smartphones to access its services.

"With our deep base and ecosystem of partners, products and services in Indonesia and globally, Advance Intelligence Group will provide relevant knowledge, experience and resources to enrich and develop a truly immersive social experience in Jagat. Our diverse range of partners will also have this opportunity to connect with millions of young Indonesian consumers and be part of Jagat's mobile first, next-gen social platform in Indonesia," said Jefferson Chen, Co-founder, Group chairman and CEO of Advance Intelligence Group.

Looking ahead, the platform plans to expand its reach internationally and is set to build a shared economy ecosystem. "Jagat has what it takes to become one of the leading startups that trailblaze Indonesia's breakthrough. Being a user-generated world filled with real-life inspired interactions, anyone, from brands, and influencers to even regular users, can build a community and create an authentic experience. We have an ambitious goal of bringing this energy to the rest of the world, and we hope world leaders can follow in the footsteps of our leaders in welcoming and supporting similar innovations with open arms," said Beagen.

To find out more about Jagat, please visit their website www.jagat.io or Jagat's social media accounts on Discord @jagat.io and Twitter @jagat_io.

To view the source version of this press release, please visit https://www.newsfilecorp.com/release/145232