David Lindley, Interim CEO and responsible for the drilling of the present drillholes at Doriri and the previous 2012 drillholes, said "The results from DOD008 continue to indicate the presence of encouraging nickel-palladium-platinum-cobalt mineralisation at Doriri. The mineralisation in DOD008 is associated with a long interval of brecciation and rhythmically interlayered nickel-chlorite and magnetite, textures typically found in low temperature epithermal systems and consistent with Doriri being a truly unique accumulation of metals. Nickel, palladium, platinum and cobalt are all metals of the 'new economy', belonging to either of the battery, magnet, speciality or critical material categories."

Drillhole DOD008 intersected a 14.10 m (13.35 m-27.45 m) width of nickel-palladium-platinum mineralisation grading 0.72 % Ni, 455 ppb Pd and 77 ppb Pt, including a 4.30 m interval grading 1.17 % Ni, 800 ppb Pd and 146 ppb Pt. DOD008 on Section 10000N was designed as a deeper test beneath the previously completed Costean I, which assayed 11 m @ 1.31 % Ni, 944 ppb Pd and 81 ppb Pt, and two previously completed cored drillholes (DOD003 and DOD004). Placement of the drill rig was constrained by very steep slopes and proximity to streams prone to flash-flooding. The dip of the drillhole was steepened to 75o to accommodate the drillhole as best as possible with respect to previously completed holes.

Doriri was included in a November-December 2010 helicopter-borne detailed low-level airborne geophysical survey completed by contractor Fugro Airborne Surveys Pty Ltd and commissioned by Papuan Precious Metals Ltd. The survey acquired magnetic and radiometric data along north-south flight lines with a 200 m spacing and a nominal 60 m mean terrain clearance. Only two flight lines passed over the 425 m long lode. Manipulations of the Doriri data sets have produced various images including reduced-to-pole, which is standard in low-latitudes, and analytic signal versions. Iron content in the Doriri mineralisation varies from 14 % to in excess of 50 %. Interpretation indicates a possible 650 m strike extension of the Doriri zone in an east-southeast direction. In the field work completed to-date, utilisation of data from a previously completed ground magnetic survey along with trenching, mapping of alteration and geochemistry has defined the Doriri mineralisation zone. 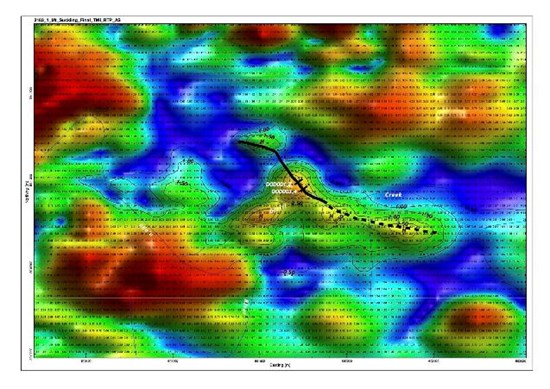 Total magnetic intensity reduced-to-pole analytic signal data over the Doriri area. The 425 m long lode structure, defined using ground magnetics, trenching, alteration mapping and geochemistry, is shown as a solid black line. An inferred 650 m extension of the Doriri mineralisation to the east-southeast, based on geophysical interpretation, is shown as a dashed black line. At its northwestern strike extent, the Doriri mineralisation disappears under thick ultramafic breccia deposits. This is reflected by low (shown as blue) magnetic intensities. The thin black contour lines represent lines of equal magnetic intensity, and have been produced by manual contouring of the data set. Compare this figure with the Doriri geology figure. 500 m tick marks are shown along the map's margins.

Doriri is a very low temperature accumulation of nickel, palladium and platinum located in the mafic and ultramafic rocks of the Mt Suckling massif in southeastern Papua New Guinea. It is a shear zone-hosted oxide-rich deposit and there is no other documented mineral occurrence with a similar geology. Temperatures of formation of nickel-rich chlorite, rhythmically interlayered with magnetite in the deposit, are in the range 100-220oC, classifying it as an epithermal deposit. The mineralisation has an average width of 10 m-15 m and has been previously mapped over a strike length of 520 m. It remains open ended in both directions. Mineralisation crops out at the surface and remains open at depth.

The technical information in this news release has been prepared in accordance with the Canadian regulatory requirements set out in National Instrument 43-101 and reviewed on behalf of the company by Ian David Lindley, Interim Chief Executive Officer of PNG Copper Inc, a Qualified Person. Dr Lindley has First Class Honours and Ph.D. degrees in Geology, 44 years mining industry experience, and is a Fellow of the Australian Institute of Geoscientists. 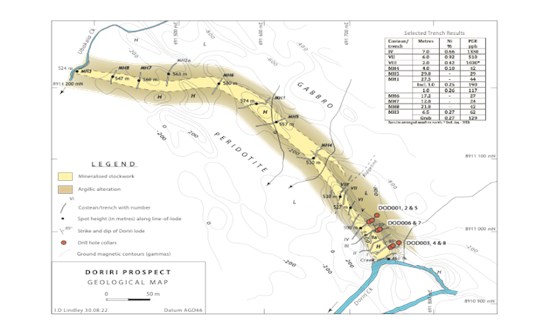 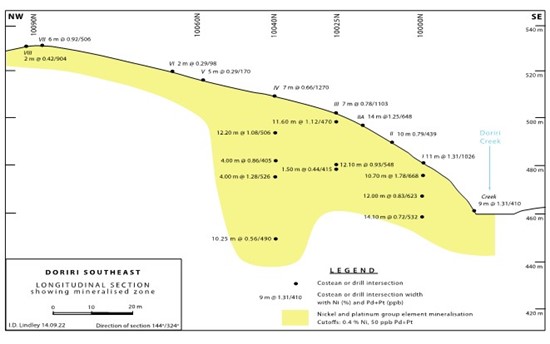 To view an enhanced version of this graphic, please visit:
https://images.newsfilecorp.com/files/8090/137909_picture1.jpg 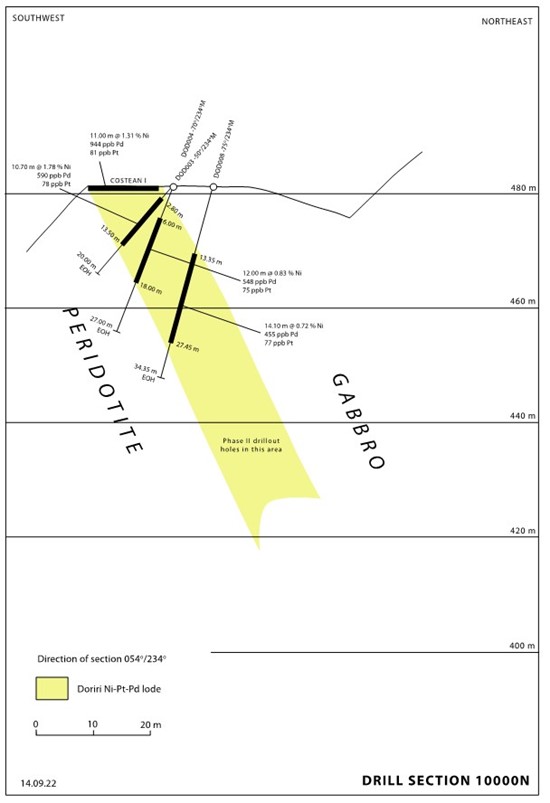 To view an enhanced version of this graphic, please visit:
https://images.newsfilecorp.com/files/8090/137909_picture2.jpg

About PNG Copper Inc.
PNG Copper Inc. is a mineral exploration company focused on acquiring, exploring, and developing quality mineral properties in Papua New Guinea. The Company's core values are respect for the Community, the Landowners, the environment and operating a safe workplace for its employees. The Company is also committed to best practice standards of Corporate Governance.

This Press Release contains forward-looking information within the meaning of applicable securities laws. When used in this document, the words "may", "would", "could", "will", "intend", "plan", "anticipate", "believe", "estimate", "targeted" and similar expressions are intended to identify forward-looking statements. Forward-looking information in this news release includes, but is not limited to, the Company's objectives, goals or future plans, statements. Since forward-looking statements are based on assumptions and address future events and conditions, by their very nature they involve inherent risks and uncertainties which may cause actual results to differ materially from the statements made.

These assumptions include industry assumptions relating to, the price of copper, gold and other metals, currency and interest rate fluctuations, and assumptions concerning mineralization, mineral recoveries, the ability to conduct exploration activities in Papua New Guinea, and assumptions concerning COVID-19. Factors that could cause actual results to vary from the Company's stated expectations include, but are not limited to, mineral price and exchange rate fluctuations, increased competition and general economic and market factors, potential mineralization not being as anticipated, uncertainties inherent in the estimation of mineral resources, exploration and mine development plans, timing of the commencement of operations and estimates of market conditions, failure to identify mineral resources, failure to convert estimated mineral resources to reserves, the inability to complete a feasibility study which recommends a production decision, the preliminary nature of metallurgical test results, delays in obtaining or failures to obtain required governmental, environmental or other project approvals, political risks, uncertainties relating to the availability and costs of financing needed in the future, changes in equity markets, inflation, changes in exchange rates, fluctuations in commodity prices, delays in the development of projects, capital and operating costs varying significantly from estimates.

Although the Company believes that the assumptions and factors used in preparing the forward-looking information in this news release are reasonable, undue reliance should not be placed on such information, which only applies as of the date of this news release, and no assurance can be given that such events will occur in the disclosed time frames or at all. The Company disclaims any intention or obligation to update or revise any forward-looking information, whether as a result of new information, future events or otherwise, other than as required by law.

To view the source version of this press release, please visit https://www.newsfilecorp.com/release/137909

Sign up to receive news releases by email for PNG Copper Inc or all companies belonging to the Mining and Metals industry.