Peter Miles CEO, commented, "Despite inclement weather for much of the late spring and early summer our initial drill program proceeded as planned thanks to the efforts of our team at Bell 2 camp. This summer's drilling primarily tested the boundaries of the Molloy monzonite followed by validation and extension of the known historic copper intercepts and lastly to test new targets."

Mr. Miles continued, "This program was specifically designed to test the theory that there is a copper-gold porphyry system on the Oweegee Dome project, which is just 40 km east of the KSM porphyry deposits, one of the largest undeveloped Cu-Au Reserves in the world. Our geological staff and hired expert consultants, all who have extensive porphyry experience, unanimously confirmed that we are in the upper levels of a porphyry system. Future exploration will seek to locate the thermal centre of this system where the high grades should reside."

(a) Easting and Northings are in metres, using UTM Zone 9 N, WGS84
(b) Cu denotes copper mineralization was observed as chalcopyrite or malachite during logging and in some places confirmed by a XRF scan. Assay results are pending. 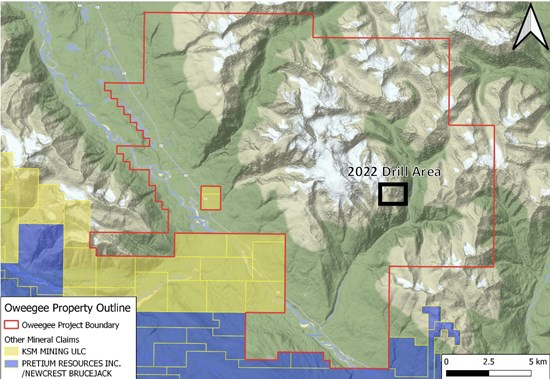 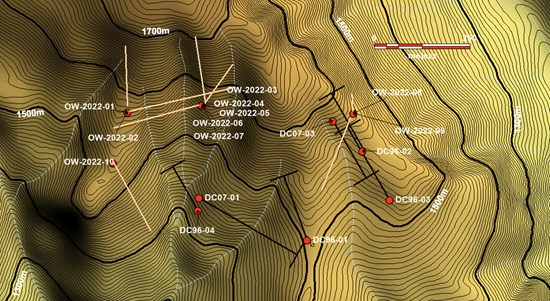 Figure 2: Plan view with drill collars, red and drill traces, on an elevation contour map. Contours every 5m, every 100m in bold, coloured background is elevation. Black drill hole traces are historic, from 1996 and 2007 exploration campaigns. Drill hole traces from this 2022 campaign are in orange.

Out of the 12 holes drilled, copper mineralization was noted in eight. Primarily, the mineralization is hosted in a monomictic (one rock type) intrusive breccia. The intrusive is a fine-grained hornblende bearing, monzonite to monzodiorite. The fragments are angular. The matrix is also monzodiorite. This unit is ubiquitously altered with sericite, silica +/- adularia, and pyrite, (QSP alteration) with variable intensity. The copper occurs in the fragments as fine irregular short styolitic fracture fill, centimetres in length, and throughout as fine disseminations. Copper is also noted as Malachite on joint faces in the upper oxide zone. Although the QSP alteration is ubiquitous in this unit, the copper mineralization is not, and is confined to zones within. The factors controlling these zones are not yet understood. Copper mineralization was also noted in some polymictic breccia zones, when these zones had fragments of potassically altered intrusives with quartz chalcopyrite veins and as centimetre scale blebs in the matrix.

A total of six holes tested the Molloy monzonite target where the company had mapped and sampled Cu-Au bearing monzonite outcrop and returned an average of 0.34% Cu + 0.829 g/t Au from fifteen grab samples (Dec 7, 2021 NR). The Cu-Au bearing intrusion was confirmed via petrography to be a fine grained, potassic altered, hornblende monzonite porphyry which contains quartz-chalcopyrite veins. The first hole was located, 200 m back from the Molloy outcrop on the nearest ridge. Drilling was directed east towards at 70 degrees bearing. See figure 1. It intersected a QSP (quartz, sericite, pyrite or phyllic) altered intrusive breccia in the upper 120m of the hole before it completed at 438m in rocks of the Stuhini formation (Triassic aged basement rocks), ash laden mudstones and chlorite altered green fragmental volcanics.

The next series of five holes were drilled in a spread of different bearings and dips from a single pad, constructed directly on the outcrop. Copper mineralization was observed in all five holes, hosted in a chlorite overprinted potassic to QSP altered fine grained monzonite hosted hydrothermal breccia, similar to the outcrop. Observed copper mineralization included malachite coating or fracture fill in the oxide zone, very fine-grained disseminated chalcopyrite throughout the core and millimetre wide discontinuous styolitic fractures. These veinlets have pyrite and chalcopyrite with smokey quartz fill and are interpreted as "A-type". Drill hole OW-2022-05 also intersected over 11 m (from 162.5m to 175.) of polymictic breccia with local chalcopyrite blebs up to 1 cm in width, with potassic altered fragments containing quartz chalcopyrite veins. All the holes exited the monolithic monzonite hydrothermal breccia and were completed in the mudstones and green volcanics of the Stuhini formation. Within the monzonite breccia, alteration and percentage of sulphide content varies in intensity. The copper mineralization at the Molloy zone is 350 m NW of the historic intercepts.

Drill hole, OW-2022-02 targeted the donut shaped IP changeability anomaly that circled the Molloy zone. It encountered disseminated pyrite hosted in a fine grained, QSP altered monzonite, that probably explains the anomaly, however target depth was not completed due to the loss of the hole.

Drill holes OW-2022-08 and -09 targeted the Delta ridge historic copper mineralization and were designed to deepen and extend this zone. Copper mineralization was observed in both holes, extending the depth and the strike. The Intrusive breccia is different to that observed at Molloy, coarser fragments, with porphyry feldspar clasts, with QSP alteration more dominated by sericite. The copper mineralization is in fine small planar veins, with white quartz and carbonate, pyrite and chalcopyrite, +/- a alteration halo, +/- molybdenum selvages. Interpreted to be "B-type."

Drill hole OW-2022-10, collared on "Pinnacle Ridge" targeted a prominent copper and gold in soil anomaly 600 m west of the historic copper intercepts. It encountered a copper-bearing zone from 143.25m to 187.15m, where the chalcopyrite is seen in discrete zones hosted in a QSP altered polymictic breccia, similar to that noted in OW-2022-05.

The copper mineralization encountered at Molloy, Delta ridge and Pinnacle covers a 1.8km2 zone and, given the similarity of host rocks and alteration, the collective area is interpreted to represent one large system, with the potassic alteration at Molloy representing a hotter more intensely altered part of the system.

The last two holes OW-2022-11 and OW-2022-12 were step-out holes to understand the possible extent of the mineral system at Delta. Drill hole 11 targeted the recently discovered copper bearing outcrop of diorite over 1,000 m south and 500 m lower elevation than the holes above at the Delta Ridge and Molloy zones. It encountered a QSP altered hydrothermal brecciate intrusive in the top 64m, that may equate to the outcrop. Drill hole 12 targeted an intense potassic altered intrusive in the Snowpatch creek eastern valley wall 1,700 m west of the Molloy Zone. It encountered pyrite bearing breccias at the IP target depth, possibly explaining the anomaly.

All drill holes were completed with HQ diameter core, and this is being split in half by diamond saw, on a nominal 2 m sample basis. The split core is then being sent to the MSA prep lab in Terrace BC. Assay results are pending. GeologicAI are also present on site, scanning the drill core, in Visual and short-wave infrared. The scanner also includes an XRF. The XRF scans for multi-elements which in the future can be calibrated to give quantitative results. This data will prove invaluable to understanding the alteration system at Oweegee.

Field work continues on the property with field crew concentrating on mapping and sampling the Skowill prospect, and an area of QSP altered intrusions east of Bear Creek, which is 1 km east of the current drilling on the Delta prospect reported here. A Dias geophysical crew is conducting an IP survey over the Delta prospect area and extending and infilling to the west.

Sanatana Resources Inc. is a mineral exploration and development company focused on high-impact properties in Canada. With an award-winning technical team and experienced management and board of directors, Sanatana is based in Vancouver and is listed on the TSX Venture Exchange (TSXV: STA).

To view the source version of this press release, please visit https://www.newsfilecorp.com/release/134854

Sign up to receive news releases by email for Sanatana Resources Inc. or all companies belonging to the Mining and Metals industry.