Sudbury, Ontario--(Newsfile Corp. - July 13, 2022) - SPC Nickel Corp. (TSXV: SPC) ("SPC Nickel" or the "Company"), is pleased to announce assay results from a further 4 out of 18 diamond drill holes from the completed 2022 drill program at its 100% owned Lockerby East Project (the "Project") located in Sudbury, Ontario.

The Lockerby East Project hosts both the past producing Lockerby East Mine and the unmined, near-surface West Graham Nickel-Copper sulphide deposit that contains over 47,000 tonnes of nickel and 34,000 tonnes of copper in indicated and inferred historical resources. The Company previously announced the commencement of a 14 hole, 4,200 metre drill program designed to further evaluate and expand the extents of the higher-grade Ni-Cu zone hosted within the larger West Graham deposit (see April 27, 2022 press release). As a result of better than estimated drilling rates, an additional 990 metres in 4 holes were added to the program resulting in a total of 5,200 metres in 18 holes being completed. Results from WG-22-001, were previously released and reported 38.0 metres grading 0.75% nickel equivalent ("NiEq.") (see June 13, 2022 press release).

New assay results from the next 4 holes are reported in Table 1.

Grant Mourre, CEO and President of SPC Nickel commented, "We continue to be pleased with our drilling on the West Graham section of the Lockerby East Project. These new results combined with previously announced results from hole WG-22-001, further confirm the presence of multiple higher-grade zones and demonstrate the potential for West Graham to be a significant nickel asset for SPC in an already established nickel camp."

Table 1: Assay results from the West Graham drilling on the Lockerby East Project.

To view an enhanced version of this graphic, please visit:
https://images.newsfilecorp.com/files/6510/130737_spc_table1.png 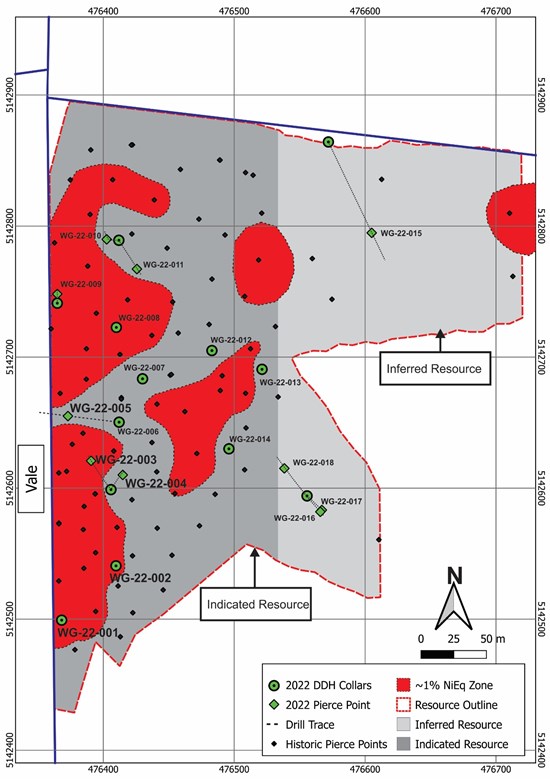 Figure 1: Plan map of the West Graham deposit showing pierce points of all reported holes and historic holes used in the 2009 resource estimate1. Red dashed line is the outline of the West Graham resource projected to surface. Shaded red area are the high-grade zones with NiEq. values of ~1.0%.

The Lockerby East Project hosts both the historic West Graham and Lockerby East deposits. In 2009, First Nickel Inc. disclosed a historical resource estimate1 of 8.55Mt @ 0.45% Ni and 0.31% Cu (indicated) and 2.0Mt @ 0.38% Ni and 0.30% Cu (inferred) for the West Graham deposit. These grades have economic potential in the context of the Sudbury Mining Camp, as the deposit is located very near to surface and may be amenable to low-cost open pit mining. The deposit is characterized by a broad zone of disseminated to semi-massive sulphide that ranges from 1.7 to 66 metres thick and strikes for 375 metres with a dip extent of up to 533 metres. Within the larger resource, a distinct zone of higher-grade mineralization grading ~1% NiEq. is present. As an example, drill hole WG-26 intersected a broad zone of mineralization grading 0.73% Ni, 0.28% Cu over 71.33 metres1 (from 56.69 metres) including a higher-grade section that returned 1.09% Ni, 0.41% Cu over 39.47 metres1. At depth, the West Graham deposit is interpreted to be contiguous with the high-grade Lockerby East deposit where, historic resources of 0.22 Mt @ 2.43% Ni and 0.78% Cu2 (indicated + inferred) are hosted.

About the Sudbury Mining Camp3

The Sudbury Mining Camp is the 2nd largest Ni camp in the world, with over 130 years of continuous production. Since the discovery of the original ore deposits, over 11.1 million metric tons of Ni and 10.8 million metric tons of Cu, together with by-products of cobalt, silver, gold and platinum group elements have been mined from the deposits. Production continues to be generated from eight major mine complex and 21 smaller ore deposits around the outer margin of the Sudbury Basin; the principal mines are owned and operated by international mining companies (Vale, Glencore, and KGHM International). The economic wealth generated at Sudbury in terms of nickel and copper value alone is close to US$500 billion.

The technical elements of this news release have been approved by Mr. Grant Mourre, P.Geo. (PGO), CEO and President of SPC Nickel Corp. and a Qualified Person under National Instrument 43-101.

SPC Nickel follows rigorous sampling and analytical protocols that meet or exceed industry standards. Core samples are stored in a secured area until transport in batches to the ALS facility in Sudbury, Ontario, Canada. Sample batches include certified reference materials, blank, and duplicate samples that are then processed under the control of ALS. All samples were analyzed in Vancouver by ALS Chemex. Platinum, palladium, and gold values were determined together using standard lead oxide collection fire assay and ICP-AES finish. Base metal values were determined using sodium peroxide fusion and ICP-AES finish. Silver values were determined using an aqua regia digestions and an AAS finish. A Certified Reference Material (CRM) standard, blank or duplicate is inserted on every 10th sample in the following order: CRM, blank, CRM, duplicate. The cycle repeats every 40 samples, thus ensuring that 10% of samples submitted are control samples.

SPC Nickel Corp. is a new Canadian public corporation focused on exploring for Ni-Cu-PGMs within the world class Sudbury Mining Camp. The Company is currently exploring its key 100% owned exploration projects Lockerby East and Aer-Kidd both located in the heart of the historic Sudbury Mining Camp and holds an option to acquire 100% interest in the Janes Project located approximately 50 km northeast of Sudbury. In addition, the Company recently acquired over 45,000 hectares covering a considerable proportion of the high prospective Muskox Intrusion, located in Nunavut. Although our focus is on Sudbury, we are an opportunistic company always looking for opportunities to use our skills to add shareholder value. Additional information regarding the Company and its projects can be found at www.spcnickel.com.

Further information is available at www.spcnickel.com by contacting:

To view the source version of this press release, please visit https://www.newsfilecorp.com/release/130737

Sign up to receive news releases by email for SPC Nickel Corp. or all companies belonging to the Mining and Metals industry.