Vancouver, British Columbia--(Newsfile Corp. - July 13, 2022) - Tower Resources Ltd. (TSXV: TWR) ("Tower" or the "Company") is pleased to report that it has received gold assays for the final four of the six follow-up holes drilled in April on the recently discovered Lightning Zone on the Company's Rabbit North property near Kamloops, British Columbia, between New Gold's New Afton underground Cu-Au mine and Teck's Highland Valley open pit Cu-Mo mine (see Fig. 1).

The April drilling program was designed to establish the strike, dip and true thickness of the Lightning Zone to ensure that the next holes, tentatively scheduled for August, are positioned and aimed to maximize their exploration value. For the April drill holes, the Lightning Zone was assumed to strike northeast and dip vertically (see Fig. 2). However, the northeast strike direction was speculative because the gold zone is not exposed and no helpful marker horizons were intersected in the earlier discovery program.

The Au, sulphur (a measure of pyrite since the gold is not accompanied by any other sulphide minerals) and Cu results obtained from the last four holes, Nos. 030 to 033, show that the Lightning Zone is Y-shaped. Its main branch appears to strike north-northwest (see Fig. 4) but the targeted northeast trend is also well mineralized and appears to be a major splay structure, doubling the known strike length of the gold system.

Stu Averill, a seasoned geologist and Director of the Company, explained the positive implications of the change in strike direction of the Lightning Zone:

"It's still early days at the Lightning Zone so some surprises are to be expected, in this case a positive one. Despite not knowing the strike of the gold zone, we got strong hits in five of six holes, delineated a major splay structure that effectively doubles the strike length of the gold system, extended the mineralization in both structures by 100 m and showed that the prime discovery area is wide open to the southeast. Plus we now know where to aim our drill holes to maximize their effectiveness."

Both holes intersected the top of the low-grade zone of porphyry-type Cu mineralization that the discovery hole encountered beneath the Lightning Zone (see Fig. 6 and Tower's Tower's June 7, 2022 press release). The top (northwest side) of the porphyry Cu zone has a steep northwest dip of 73° (see Fig. 5), similar to the dips of both the shear zone and Hole 030. Near the end of the Cu zone, Hole 030 intersected 26.5 m of 1.76 g/t Au, including 10.5 m of 3.40 g Au, followed at depth by 6.0 m of 1.71 g/t Au. The overprinting of the Au mineralization on the older Cu mineralization accounts for the visually impressive quartz veining and pyrite-chalcopyrite enrichment that was previously reported in this drill hole (see Tower's May 3, 2022 press release)

Importantly, the revelation from Hole 031 that the main branch of the Lightning Zone strikes north-northwest and remains strong in this direction for more than 100 m further implies that the zone is wide open south-southeast of the prime discovery-area intersections (see Fig. 4) rather than potentially being cut off as in the former northeast trending model.

Hole 033 was drilled 50 m further northeast along strike from Holes 030 and 031. It was drilled to the northwest parallel to these holes at the same flat dip as Hole 031 and thus intersected the same zone of porphyry-style Cu mineralization followed by strongly deformed volcaniclastic rocks of the splay shear. Instead of the usual wide zone of low to medium-grade Au mineralization Hole 033 intersected 1.0 m of very rich mineralization grading 69.3 g/t (2.01 oz/ton) Au. This high-grade zone is only 200 m southwest along strike from and may be related to the 10 m drill intercept averaging 12.4 g/t Au in historical Hole 97-07 (see Fig. 4).

Hole 033 was collared over a large, steeply northwest dipping quartz-feldspar porphyry dyke that was also intersected deep in Hole 030 (see Fig. 5). The porphyry dyke appears to be related to the Au mineralization rather than the older Cu mineralization as it is sheared, pyritized, and typically contains 0.1-0.2 g/t Au but only 20-40 ppm Cu.

A vertical hole, No 94-02, that was diamond drilled 400 m north-northwest of Holes 026, 028 and 029 in 2004 (see Fig. 4) also appears to have the hit the Lightning Zone as it intersected 74 m of 0.58 g/t Au and the mineralization displays the characteristic fracturing, bleaching, silicification and pyritization of this zone rather than the Cu-Au association of the porphyry-type mineralized zones that are associated with the nearby Durand Stock.

The gold mineralization at Hole 94-02 is hosted by diorite of the Durand Stock. The mineralized diorite is covered by 28 m of young basalt flows that were erupted from a fissure 300 m to the northeast on the summit of the Durand Stock about 8 million years ago. Part of the lava appears to have bled south-southeast along the Lightning Zone as similar basalt was intersected at the tops of Holes 025, 029 and 032. The coincidence of these young lava flows with the Lightning Zone suggests that recessive weathering of the highly fractured, gold bearing rocks prior to eruption of the basalt produced a channel that the lava exploited.

Drilling at Rabbit North is expected to resume in August. The drilling will primarily target the extensions of the main branch of the Lightning Zone north-northwest and south-southeast of the prime discovery area. 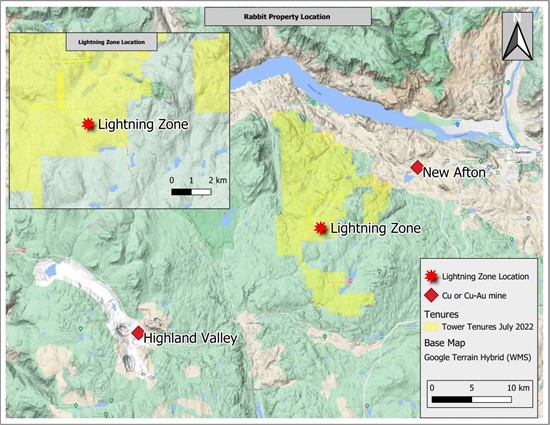 To view an enhanced version of Figure 1, please visit:
https://images.newsfilecorp.com/files/5023/130690_figure1.jpg 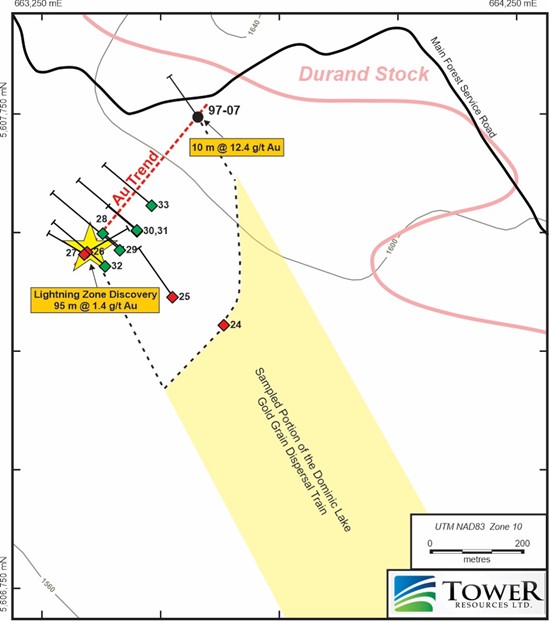 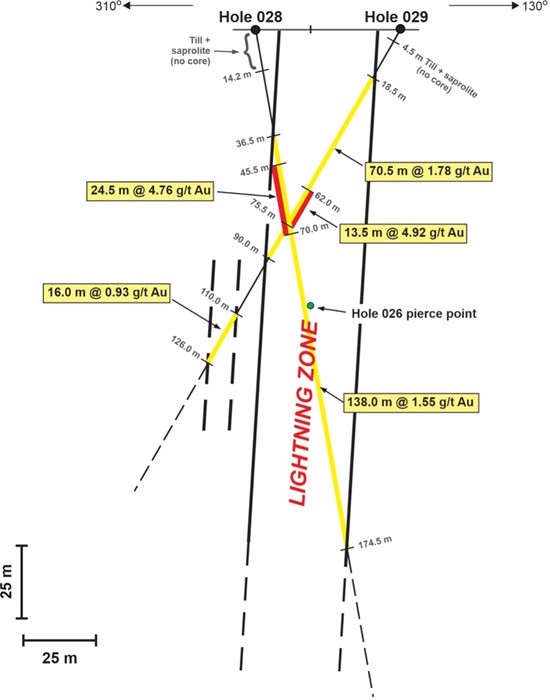 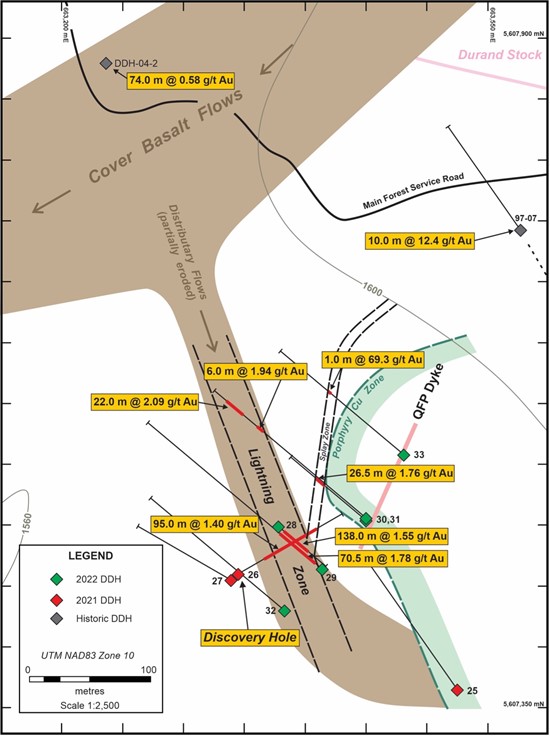 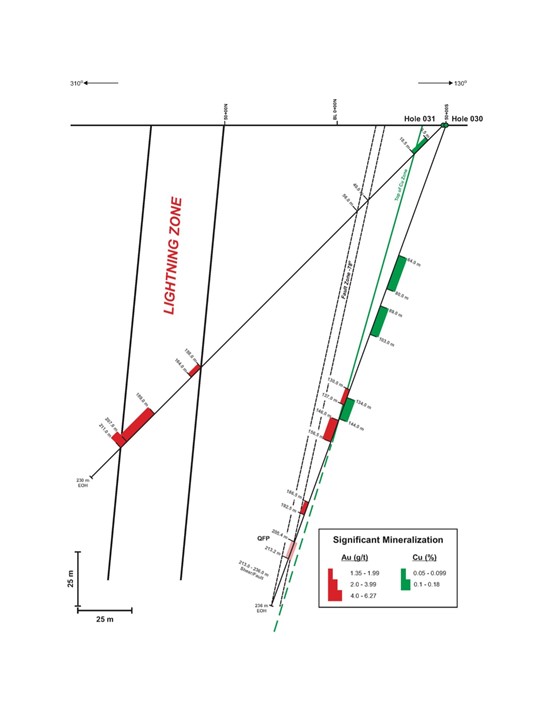 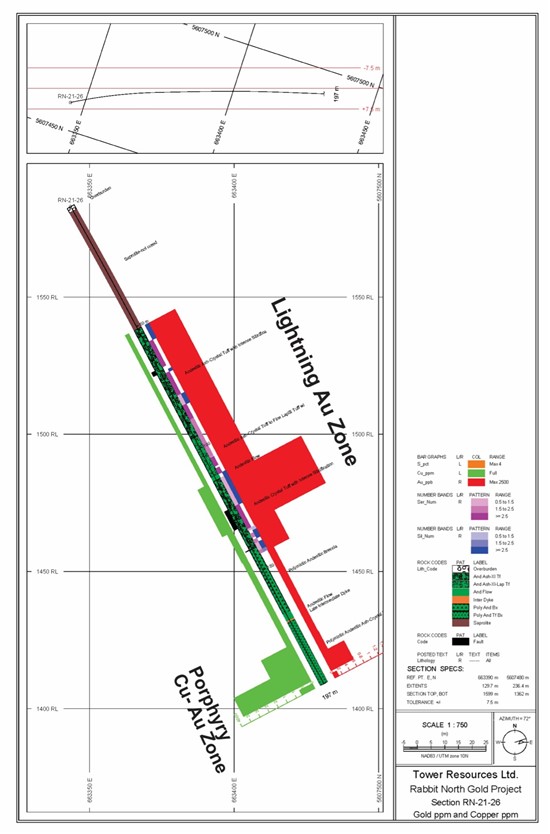 To view the source version of this press release, please visit https://www.newsfilecorp.com/release/130690